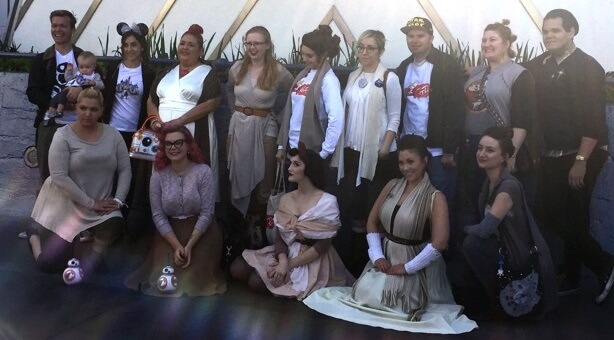 After years of anticipation, “Star Wars: The Force Awakens” finally opened in theaters over a month ago, and since then fans have been clamoring for more Rey. It seems merchandise supply levels did not quite reach demand for the extremely-popular character, either due to underestimation by toy companies or secrecy over the movie’s plot, or perhaps both.

To help counter the lack of Rey’s availability in stores and bring the strong female Jedi’s devotees to the foreground, Rey fanatics planned a “Rey Day” get-together at Disneyland in Anaheim this past Sunday, January 24th. Nerdist’s Jenn Fujikawa discovered the event and took some great photos. The celebration united some of Rey’s biggest fans, kids and adult alike, who either cosplayed in character to the park, or “Disneybounded” in Rey-themed clothing to express themselves creatively or get around Disneyland’s newly-reinforced “no costumes” policy for guests over a certain age.

No word on when the next “Rey Day” will happen, but rest assured the new “Star Wars” star has enough of a following to make it a tradition by the time the next movie hits theaters.