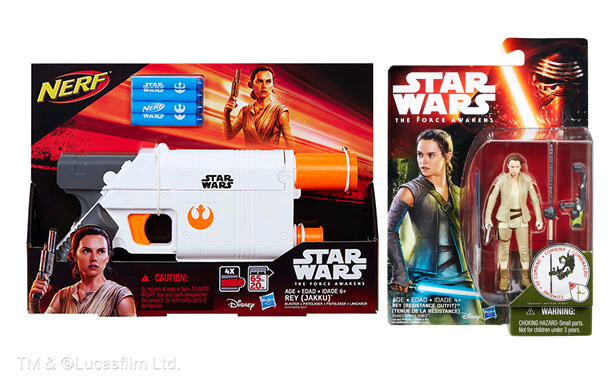 Fans eager to get their hands on Rey toys and the rest of the characters from “Star Wars: The Force Awakens” will soon find a fresh batch of new merchandise on store shelves.

Hasbro and Disney have released images of the next wave of toys, Lego sets, Nerf blasters and much more that should help satisfy fans of the blockbuster movie. Although recent criticism of the lack of Rey toys was overblown, since nearly empty shelves at many stores where Star Wars merchandise should have been stocked rarely offered up any of the major characters, the two companies aim to erase any lingering doubt that Rey is not heavily featured in “The Force Awakens” toy line.

“Rey is a true break out hero in the movie and is proving a huge hit with our guests,” said Elissa Margolis, Senior Vice President, Disney Store in a company statement. “Demand for Rey merchandise was strong even before the movie released, with products selling as quickly as we could restock shelves, and it’s only growing with the success of the film.” “This new wave of product has got key elements from the film. You see Rey with a saber, her blaster, and a number of other elements we wanted to hold back until the film had been released,” Paul Southern, head of Lucasfilm licensing, told Entertainment Weekly. “The timing is good to try to address some of the social discussion that has been created through the ‘Where’s Rey?’ movement.”

Although it’s a simple case of supply and demand that couldn’t keep up with fans snatching up the most heavily sought after merchandise including those featuring Rey (recalling the early days of “Frozen” fever), Hasbro and Disney wish to rectify this without the burden of having to protect key elements from the film before it was released. This means that Rey will now be available with Luke Skywalker’s blue lightsaber in an action figure, for example. The older, graying “Force Awakens” version of Han Solo is also featured more prominently and other main characters such as Finn will now be available to purchase with different outfits featured in the movie.

From the Disney press release:

New items focus on key plot points from the movie like the identity of Kylo Ren and the reveal of Rey’s weapon as a lightsaber. Highlights from the Disney Store line include a Rey Lightsaber toy, updated Elite Series Die Cast Action Figures, a Kylo Ren Unmasked action figure, as well as a Deluxe Figure Play Set that includes 10 highly detailed figures such as General Leia, Han Solo, Rey, Kylo Ren and more.

Highlights at mass retail include new items from Hasbro, such as: 12-inch action figures featuring the characters Rey and Finn as FN-2187 (his stormtrooper moniker), 3.75-inch figures featuring new characters and scenes like Rey in her Resistance Outfit with her Lightsaber, Star Wars NERF Rey and Han Solo blasters and a Star Wars Bladebuilders Rey Electronic Lightsaber. From LEGO®, new Star Wars: The Force Awakens construction sets include a Resistance Troop Transporter (featuring a General Leia minifigure) as well as LEGO® brand Star Wars™ buildable figures featuring heroes and villains from the film, such as Rey, Finn, Kylo Ren, Captain Phasma and more.

Beyond figures and play sets, fans can find products featuring their favorite characters including Rey, Finn, Kylo Ren and Captain Phasma, across a range of categories including: Hot Wheels® diecast vehicles and ships from Mattel, plush from Build-a-Bear, skateboards and outdoor play items, role play from Rubies, home décor (bedding, throws, posters), seasonal and party supplies, puzzles and much more. Apparel for the whole family is also available at Target, Kohl’s, JCPenney, Hot Topic and more.

To view a gallery that shows a selection of the new toys, click here for Entertainment Weekly’s original article.