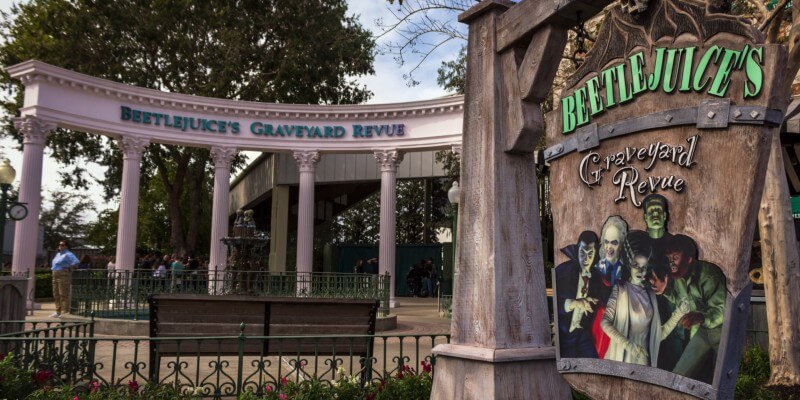 In what has recently become a regular occurrence in the Orlando theme parks, another attraction has closed to make way for newer and more exciting things. Fans showed up in droves Tuesday to catch one last performance of the Beetlejuice’s Graveyard Revue. The ghost with the most didnʼt disappoint and provided thousands of fans with a bittersweet send off throughout the day as the show made its final departure back to the underworld.

Located in the San Francisco area of Universal Studios Florida, the show originally debuted at the park in 1992, along with its Hollywood counterpart. The show has changed several times over the years to keep it fresh, and was updated as recently as 2014. The graveyard mashup style show blends together a mix of popular music, topical jokes, and the outrageous comedy of the man himself, Beetlejuice. He brings with him a few friends – The Wolfman, Frankenstein with his bride, Dracula, Cleopatra, the Phantom of the Operaʼs daughter Phantasia, and a troupe of ghost dancers. The final moment came when fans shouted BEETLEJUICE! BEETLEJUICE! BEETLEJUICE! one last time to raise the famous ghost back from the dead. He and his ensemble delivered an outstanding final performance with a few special nods to the appreciative fans. The crowd rocked out to the showʼs music and dance numbers, many with tears in their eyes, as they sent the king of the undead out in style with thunderous applause. All is not lost for fans of the iconic 80ʼs ghost, as Universal has confirmed that even though the show may have departed forever, Beetlejuice himself will be making regular appearances in the park to meet with guests and pose for photos, while a similar Beetlejuice show at Universal Studios Japan continues to operate. Universal has additionally added a variety of new street shows which are sure to help add some extra entertainment throughout the park and should help to compensate for the parkʼs recent losses as construction walls go up. The closure comes on the heels of several other recent attraction closures as Universal continues their ambitious push to revitalize the two Orlando theme parks. The theaterʼs space along with that of the neighboring attraction Disaster! (which recently closed as well, on September 8th) will make way for a new attraction based on the popular Fast and Furious franchise, set to open in 2017.