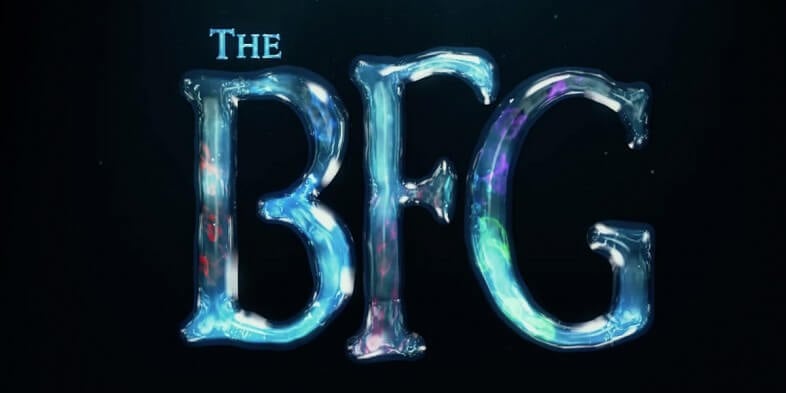 Fresh off of his most Best Picture nominated film, “Bridge of Spies,” director Steven Spielberg has continued work on his next feature film “The BFG.” The story, based off a classic children’s book written by acclaimed author Roald Dahl (“Charlie and the Chocolate Factory,” & “Matilda”), tells the story of Sophie, a young girl who meets “The Big Friendly Giant.” Together, the two characters have a handful of adventures, including interactions with some fearsome and dangerous giants. The story begs to be told by Spielberg, and hearkens back to the days of Amblin Entertainment, as well as films like “ET.”

Today, we not only received the first poster for the film, but also got some more details about the characters involved. First, the story looks to keep the proportions in shape, with Sophie being significantly shorter than the 24 foot giant. The poster obviously makes the connection between the acclaimed works of the Dahl, as well as the Spielberg connection. It is a fun and cute poster, a tone that will hopefully transfer to the film in question. Entertainment Weekly also spills the beans on other important aspects of the film, including some official casting news.

It’s been known for some time that newcomer Ruby Barnhill will play Sophie, and that the Oscar nominated actor Mark Rylance (“Bridge of Spies”) would play the BFG. Now we know that both Jermaine Clement (“The Muppets: Most Wanted” & “Men in Black 3”) and Bill Hader (“Saturday Night Live” & “Inside Out”) will both play some of the “unfriendly giants” as Flushlumpeater and Bloodblotter respectively. The castings certainly make sense, as each actor’s voices make them ideal fits for the roles. Furthermore, with CGI giants, Spielberg won’t have to worry about playing against type in the case of Hader (Clement has played villains in a handful of roles now so that would be an easier sell). Finally, Entertainment Weekly also confirmed that the “dream catching” aspect of the movie is intact. This in particullar could be used to help build some fantastic set-pieces and incredible visual effects. I am extremely excited to see if the accidental capturing of a nightmare is also transferred over, because that could give the effects team some incredible work to create. It should be noted that current Industrial Light and Magic studio head Sam Mercer is a producer on the BFG, and with Disney producing and distributing the film, it is not a hard guess as to who is doing the effects work. With two Oscar nominees this year, and 6 of the 10 on the shortlist, it would not be surprising to see the visual effects giant to create, well, giants.