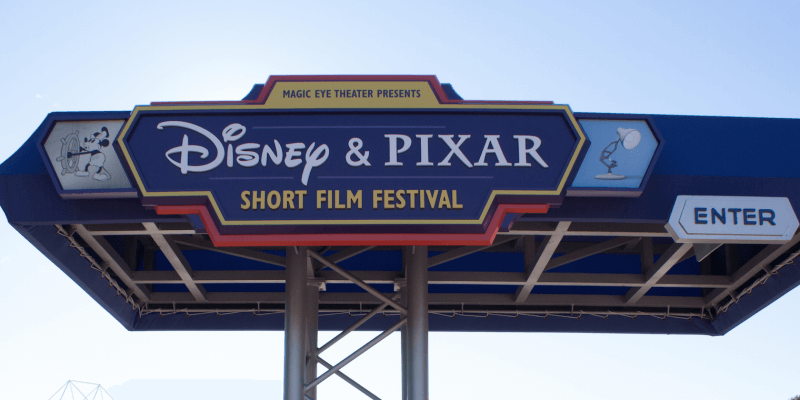 The Disney & Pixar Short Film Festival officially opened December 23 in Epcot at the Walt Disney World Resort. Replacing a fan-favorite attraction, Captain EO, the new experience at the Magic Eye Theatre, is sure to please Disney fans of all ages. I walked right through the stand-by line, and waited 10 minutes for the next performance to start. During the wait time, the television screens above show interviews with popular faces from Pixar, like Ed Catmull, who is the current president of Pixar Animation Studios.

Other fun stories told by Pixar artists include how the Pixar logo was created, featuring the lovable Luxo lamp, as well as where the inspiration to Toy Story came from.

Don’t forget to grab your 3D glasses as you walk into the theater! This 4D experience is definitely worth visiting. With three different Disney and Pixar shorts including “Get A Horse!”, “La Luna”, and “For the Birds,” guests of all ages will be entertained.

The viewing experience starts with “Get A Horse!” which features Walt Disney voicing Mickey Mouse. This short follows Mickey and Minnie and pals adventuring by wagon until Peg-Leg Pete shows up and attempts to run them off the road.

Second up is the precious short “La Luna.” The 3D glasses bring this one to life in such a special way. Almost a coming of age story, the young boy is finally invited to work with his Papa and Grandpa. Sailing across the sea, the trio land upon the moon and the boy must decide if he should make his own work traditions, or follow those of his elders. Definitely a cute story that everyone can relate to at some point in their life.

Last to be shown is the lovable “For the Birds.” Playing along with the clique mentality, a flock of birds perch on a telephone wire, until a large bird with a bit of goofy characteristics join them. This short can give you something to talk to with young ones about how important it is to stay true to yourself and not pick on others for being different.

The 4D experience definitely gives the Pixar shorts an extra jolt of energy that will leave the younger guests giggling.

All in all, the Disney & Pixar Film Festival is a perfect afternoon attraction. It is a long enough time to feel like you can recharge, all while laughing along with the rest of the crowd.