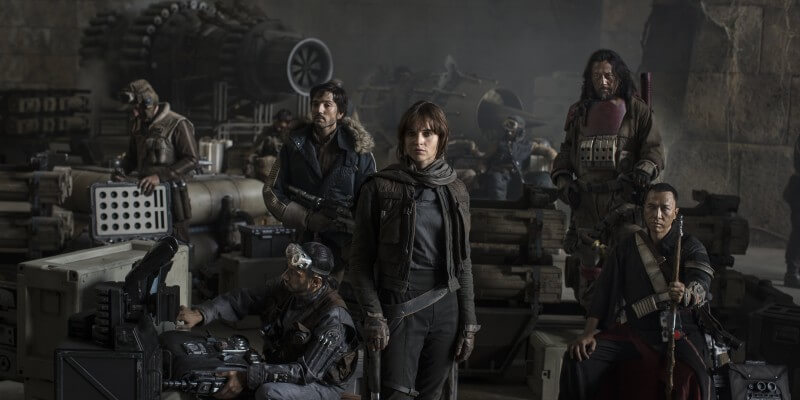 The force is strong with Star Wars franchise.

Fandango is reporting that “Rogue One: A Star Wars Story” is the most anticipated movie of 2016 according to a recent survey, beating out several other strong candidates for the top spot.

Despite being largely eclipsed by the hype of “The Force Awakens”, the first entry in the third “Star Wars” trilogy that has been destroying box office records since its release on December 18, the mystery and relatively little news of what is the second movie in Disney’s “re-boot” of Star Wars perhaps is what is contributing to the anticipation for “Rogue One”, their first so-called “Star Wars Anthology” film.

Even with its December 16 release date, there hasn’t been a trailer or set photos officially released — aside from a single group shot — nor have there been many details on a plot that centers around a group of Rebel soldiers who stole the plans for the original Death Star and set the wheels in motion for the events that took place in 1977’s “A New Hope” the first movie of the original trilogy. The cast includes Oscar-winning actress Felicity Jones along with Diego Luna, Ben Mendelsohn, Donnie Yen, Jiang Wen, Forest Whitaker, Mads Mikkelsen, Alan Tudyk. and Riz Ahmed. The film is being directed by Gareth Edwards (“Godzilla”) and the score will be written by Oscar-winning composer Alexandre Desalt.

After a record-setting 2015 box office showing, Disney appears to be in good shape for the new year. In second place on the survey of most anticipated movies is Pixar’s “Finding Dory”, the sequel to the beloved “Finding Nemo”. Taking fifth place is Marvel’s “Captain America: Civil War” and “Jungle Book” is in the tenth spot. Also named were the most anticipated characters in upcoming films as well as the up-and-coming actors to watch in 2016.

The complete results of the survey are as follows:

Most Anticipated Comic Book Character Debuting in a Major Role:

Comments Off on “Rogue One: A Star Wars Story” is the most anticipated movie of 2016 according to Fandango survey