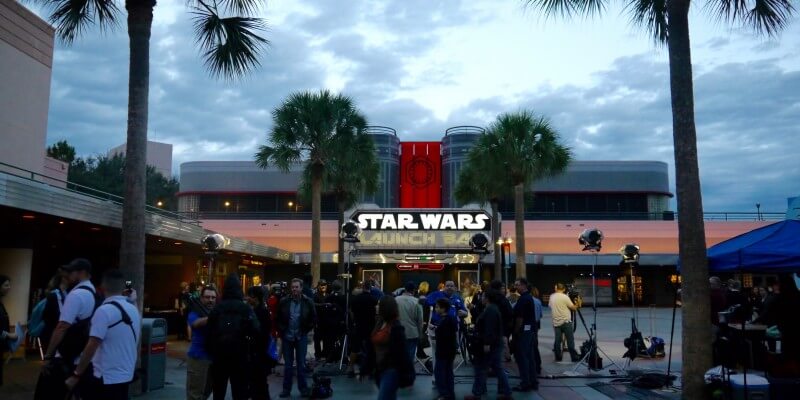 First Order Stormtroopers greeted “intruders” at the entrance to Launch Bay while TV news crews were broadcasting live. Stormtroopers will soon be patrolling the entirety of the park to interact with guests and keep order. At a nearby table, an assortment of Star Wars-themed food and drinks that will be made available at the park were displayed, including Boba Fett and Chewbacca steins and a BB-8 sipper that is already being sold. Some of the food offerings are also now available at the Backlot Express, near the Star Tours attraction, and the cupcakes among other treats will be offered during the upcoming “Symphony in the Stars: A Galactic Spectacular Dessert Party”. We’ve always wondered what blue milk really tastes like… Outside of the actual entrance to the Launch Bay, beautiful high-quality concept artwork of all seven of the Star Wars films from artists such as Ralph McQuarrie and Doug Chiang grace the walls for guests to look at as they wait to get inside. Inside the Magic’s extensive look of the interior of the Launch Bay, including video, can be found here.

Needless to say, the exhibit is a thorough look at both the original and prequel trilogies as well as the upcoming “Star Wars: The Force Awakens” with props, models and replicas as well as helmets, clothing and much more. The look and feel inside does a great job of replicating Star Wars — complete with a mini-cantina and a mischievous Jawa eager to barter with your items — and serves as a (small) taste of what’s to come with the upcoming Star Wars Land, set to begin construction at some point next year.

Make sure to take the time to stop by and visit with Star Wars icons Chewbacca and Darth Vader too. Of course, no visit to Hollywood Studios would be complete without a voyage on the Star Tours, which now features a “Force Awakens”-inspired scene from the new planet Jakku. Also new is the redesigned Jedi Training: Trials of the Temple, in which Darth Vader is joined by fellow Sith baddie The Seventh Sister and special guest Darth Maul.

You can see the complete video of the new show here. Old and new Star Wars fans alike will enjoy the new Path of the Jedi show that is nearby, which gives a great overview of the past Star Wars film and the legendary tales told as well as a look ahead for “The Force Awakens”. In addition to getting a tour of Launch Bay during Star Wars Experience Media Day, guests were also invited to a Q&A panel discussion with Imagineers to discuss what’s new at the park and what’s to come.

For more photos of the event, check out this slideshow: