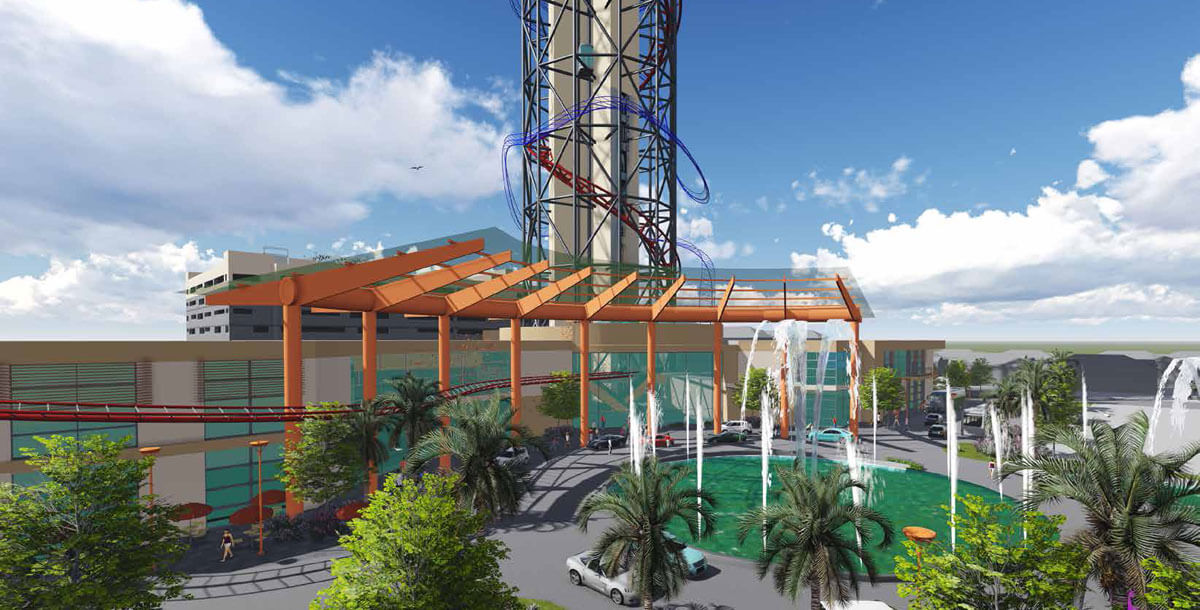 While the developers behind the massive Skyplex project continue to move forward with plans to have their project heard at a special Orange County Commission on December 1, growing opposition to the plan is being spearheaded by none other than Universal Orlando.

On Friday, Orlando Sentinel reported that a Universal Orlando-affiliated coalition called Save Our Orange County Community launched a website and has begun distributing fliers around the surrounding neighborhood detailing their reasons for opposing the enormous project. Plans include a 595-foot tall “polercoaster”, the centerpiece among shops, restaurants, an observation deck and much more. Universal Orlando has long opposed the project but are ramping their efforts ahead of the meeting that will decide the fate of the Skyplex.

“This project sets a bad precedent and will be a negative impact on our community and our quality of life,” Universal spokesman Tom Schroder said in an email.

He would not say how many mailers were sent out.

Josh Wallack, the developer behind Skyplex, called the mailers “unbelievable.”

“We don’t have their [Universal’s] resources,” he said. “All we can do when we go in front of the board of county commissioners … is speak the truth.”

The mailers feature photos comparing the height of Skyplex with structures including the Orlando Eye and the SunTrust building downtown. Orange County staff said it appears that the proportions are off. Universal said it believes everything is to scale.

The mailers provide email addresses and phone numbers for Orange County commissioners, who will vote on the project Dec. 1.

The website, saveourorangecountycommunity.com, also has a link for electronic petition signatures.

Meanwhile, Unicorp National Developments Inc. is continuing onward with their plans to overhaul a nearly one mile long stretch of land on International Drive that will also incorporate the Skyplex project, should it proceed as designed.

The Orlando Business Journal has details on what is being referred to as a massive hotel, retail and open-air destination that was planned with assistance from Skyplex’s architect team.

A site plan shows Unicorp’s idea for potentially 13 new hotel towers with retail space surrounded by natural features like lakes, small parks and walkways, and a road system. The map also shows what Unicorp has planned for about 20 acres of land just east of the I-Drive 360 complex that could host three hotel towers, a large restaurant development, a theater and a massive water feature show that would be seen from the Orlando Eye.

(Unicorp president Chuck) Whittall was not available for comment, but has previously told Orlando Business Journal he envisioned that 20 acres of land — which he has yet to close on — could be home to entertainment that tourists could find in Las Vegas, without casinos. That includes nighttime entertainment and attracting shows and singers to perform there nightly.

Joshua Wallack of Wallack Holdings said he believes Unicorp’s vision is to build an outdoor restaurant area much like the dining experience that sits next to the iconic fountains outside the Bellagio Hotel and Casino in Las Vegas. This plays right into the district’s goal of breathing new life into the after-hours scene of the tourism corridor — a much-needed amenity for both leisure and convention visitors.

For more on the project, you can read the entire article at the Orlando Business Journal.