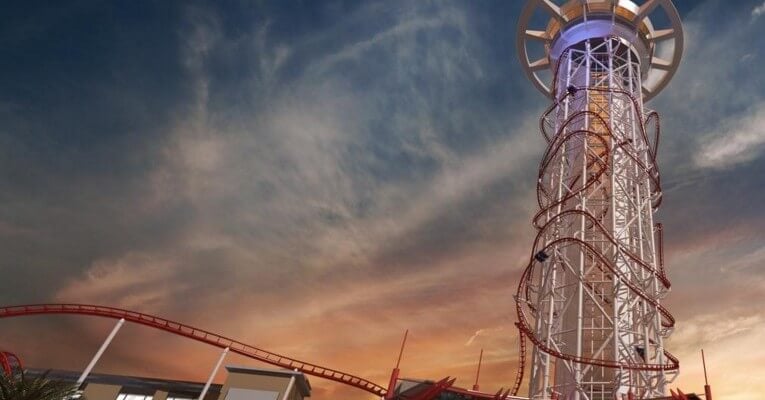 A massive plan is in the works to transform International Drive into a thriving, cohesive district not unlike Las Vegas’ famous strip. If Skyplex owner and developer Josh Wallack gets his way, his nearly half a billion dollar complex proposed for the corner of Sand Lake and I-Drive will become the cornerstone of Orlando’s hottest area outside of the theme parks.

But not everyone is on board with the idea. While many Orlando residents and tourists are excited about the notion of a 595-foot tall “polercoster” and drop tower, a zip line, surf pool, and more classy shopping and dining uniting the presently cluttered I-Drive, one of Orlando’s biggest businesses is firmly against it: Universal Orlando.

At a recent county meeting, Universal stood up to essentially demand that the Skyplex project be shut down, citing issues with sight lines into their theme parks, zoning problems, and storm water drainage issues, among other smaller complaints. The reality of it is that Universal Orlando has their own entertainment district, CityWalk, and plans to unite International Drive from the Orange County Convention Center, past the Orlando Eye, and all the way up to the Skyplex as a fully walkable row of restaurants, stores, and attractions no doubt eats into one of Universal’s primary businesses. Wallack recently walked me through the proposed Skyplex project and greater vision of I-Drive. It began with his company buying up prime real estate in the area, including the Perkins and Burger King lots on the north side of Sand Lake and International, along with many other nearby plots. If he gets his wishes, all that will be taken over by the Skyplex development, linked across busy Sand Lake by safe pedestrian bridges, leading initially to more of his newly-purchased properties.

On the south side of Sand Lake, Wallack’s anchor establishment already nears completion: Mango’s Tropical Cafe. The restaurant and nightclub is already a smash success in Miami Beach and Wallack intends for it to be even bigger in Orlando when it opens in just a few weeks. It’s a $30 million investment that Wallack says is Orlando’s first Las Vegas-style night club, minus the “sin” of Sin City. Its 20,000+ square feet will be open for families by day starting at noon, but remain thumping until well past 3am for adult partiers. High-tech sound and lighting systems fill the establishment, which will feature multiple live bands and has plenty of bars, all wrapped in a style that throws back to Hispanic culture of decades past.

But while Mango’s is a sure thing, the Skyplex project is far from it, despite Wallack already having invested tens of millions of dollars in property purchases in the area.

The future of the Skyplex hinges on an upcoming meeting with the Orange County Commission on December 1. There, a vote will take place on whether Universal’s claims are valid and the Skyplex has no place in Orlando – or if such a large project is exactly what this city needs.

Those in favor of the Skyplex project are encouraged to send an email of support to planning@ocfl.net and/or show up to the meeting in person. Wallack is hoping to get worldwide attention for this endeavor that quite literally could change the face of Orlando.