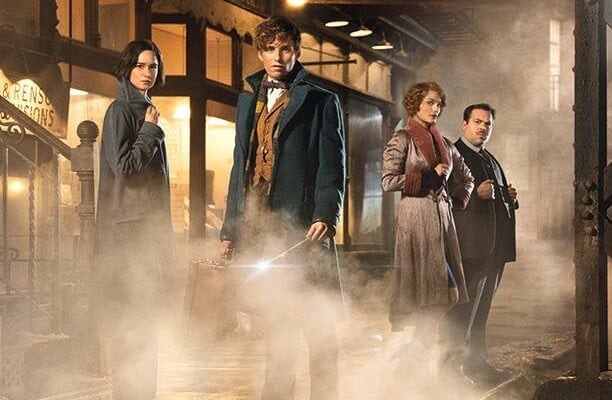 Yesterday, we got a reveal of the logo for J.K. Rowling’s newest addition to the Wizarding World, “Fantastic Beasts and Where to Find Them”. Today, Entertainment Weekly revealed a handful of set photos and images from their time on set. You can find most of them below. The images are impressive upon first glance. Academy Award winner Eddie Redmayne (“Theory of Everything”) takes center stage in most of the images as the protagonist of the story. Redmayne plays Newt Scamander, the author of the textbook Fantastic Things and Where to Find Them. Harry Potter fans should know it well, as it was one of the books required for Harry to purchase before the start of his first year at Hogwarts.

In the set images, Scamander looks to be a more stylish academic, sporting a bow tie and nice blue overcoat. The luggage suitcase is also in good shape, matching Redmayne’s vest in color. I will say the style is more authentic of modern trends than those of the 1920s, but matches well with some of the styles represented in Baz Luhrmann’s Great Gatsby.

David Yates also makes an appearance in a handful of images. Yates is best known for directing the last four installments of films of the Harry Potter Saga. He also has been hard at work on an apparently troubled shoot for a live action Tarzan adaptation. We also get a look American witches Katherine Waterson and Alison Sudol. Waterson looks to be an ally of Newt as they move quickly through the streets of New York, while Sudol’s actions have little indication of her alliances.

The most drastic transformation is Dan Fogler, who not only lost his trademark long hair, but also his beard for the role. As the lone Muggle, or No-Mag (Rowling says No-Mag stands for no magic in the American Wizarding community), his role will definitely be a unique foray into the franchise. Needless to say, his ability to overreact and still be funny will serve him well in the franchise.

Missing from the shoot were actors Colin Farrell, Ron Perlman, Ezra Miller, and Jon Voight. Little is known about their characters at this point, with rumors ranging from Perlman playing a Goblin to one of these actors taking on an antagonistic role. The Perlman rumor is most likely, with several of the images taking place in what looks like the American version of Gringotts. Time will tell on these actors, and we’ll keep you updated as images release.

With the images in place, it looks like fans are likely to be delighted by the latest adventure in the Wizarding World. With relatively uncharted territory being explored by the Rowling and the filmmakers, this should be a fun addition to the Harry Potter universe.