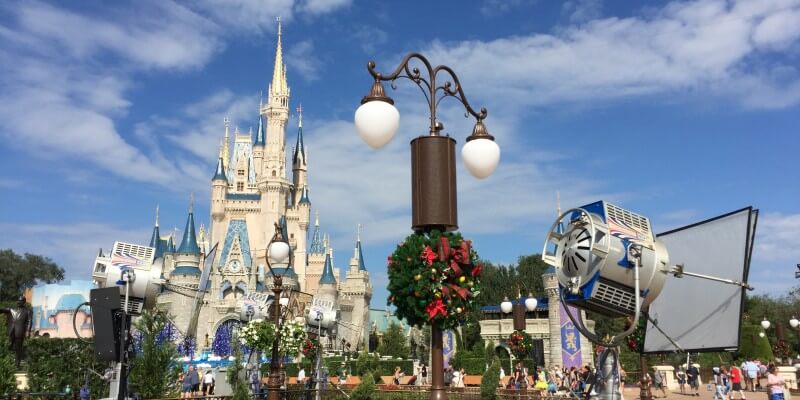 It’s that time of the year, when miles of cable are run and cameras fill the streets. You’ll find lights and monitors set up as far as the eye can see, and musical acts performing on an immensely decorated stage. The parade floats travel up and down Main Street, for take after take, and that’s how you celebrate Christmas morning in the middle of November.

The annual “Disney Parks Unforgettable Christmas Celebration” taping took place over November 11, 12 and 13th inside the Magic Kingdom, and it was as festive as ever. We tagged along for a portion of the parade float filming on its final day to see what fun was in store for December 25th. The stars from Disney/Pixar’s Inside Out, Joy and Sadness, made their first visit to the Magic Kingdom atop a familiar float. During the “Scrumptious Unit” we found Goofy prepping some goodies in his roaming kitchen with parade co-host Jesse Palmer. The big guy himself, Wreck-It Ralph took to the gingerbread float for his appearance in the parade. No sign of Fix-It Felix, but he did bring a sweet little darling with him to take part in the fun. Vanellope von Schweetz was cruising right down the middle of Main Street USA in her race car made of gingerbread. Be sure to check out the 32nd annual holiday telecast where will air nationwide on Dec. 25 at 10 a.m. ET and 9 a.m. CST, MST and PST on ABC-TV. The special will have performances by Seal, Ariana Grande, Reba McEntire, Tori Kelly and many more.