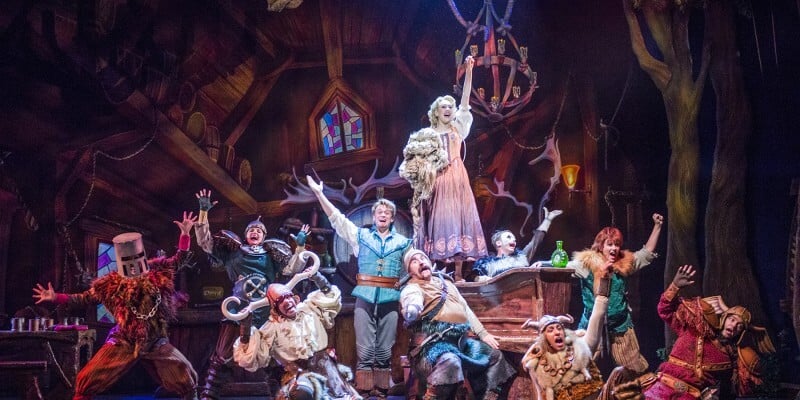 Guests aboard the Disney Magic watching the new “Tangled: The Musical” production can squint all they want; they won’t be able to locate Pascal perched on Rapunzel’s shoulder.

That was just one (tiny) limitation that the production team encountered when they took on the task of adapting the “Tangled” feature film into a Broadway-style musical show exclusively at Disney Cruise Line’s Disney Magic. It was also the challenge of condensing the story down to just under an hour while incorporating three new songs by Alan Menken. Oh, and accommodating everything that goes into running a first-class production into a tiny storage space shared with other shows that are performing during the cruise. Glenn Slater was tasked to write the play and the production team had a dream, much like Rapunzel, that Menken could help write some new music for it.

“(Slater) did a magnificent job but it still felt like it needed a little bit more music to it,” said creative portfolio executive Dana Harrel in a Q&A session aboard the Disney Magic after a preview performance of the musical. “Glenn started thinking, ‘Well, do you think Alan would write some new songs?’ We were (thinking) Alan is way too busy, he’s got way too much on his plate. But when we went to Alan, he said he had always wanted to see it on the stage. So he actually wrote three new songs that helped us advance the story which is fantastic.” It’s a testament to the production that the pace and the storytelling doesn’t feel cramped or rushed and actually compares favorably to the original.

“We put together a top-notch creative team because there’s a lot of magic here and it needs to be theatricalized and also has that pixie dust Disney magic that needs to add to it.” said Harrel. “So that’s why we hired these amazing creative people. They’re the magic behind the show really.”

“The film is beautiful and it’s lovely; so many people admire it so much including myself,” added senior art director Bradley Kaye. “So the challenge is that you want to make sure not to lose any of that lovely warmth and magic of the film.”

Tony award-winning costume designer Paloma Young took on the challenge of adapting the source material into tangible creations and bringing them to life. She took inspiration from her surroundings as well and told how she was surprised to find a hibiscus flower growing by her home in Brooklyn immediately after joining the project and ended up using it as inspiration for Rapunzel’s dress. Even with a leaner, refined story to tell there were compromises to make as well. Such as the plight of Pascal who, as Harrel pointed out, would have been too tiny to see for audiences if he was lifelike but making him larger would have been odd and distracting.

“It would have looked like she had adopted a gecko or a lizard,” Harrel joked. “Another thing about it is that Pascal doesn’t actually drive the story. When you’re taking an hour-and-a-half film and you’re trying to make a 57-minute version, what you need to do is think about the things that drive the story and Maximus really drives the story quite a bit. So we spent a lot of time thinking about what Maximus would look like coming to life.”

Though he didn’t make the cut, there are several hidden Pascals in the play including on the tower for those on the lookout for him.

“The joke is that he’s a chameleon so he can be anywhere on the tower,” said Kaye.

“Tangled: The Musical” is an all-new Disney Cruise Line show exclusively on the Disney Magic.

Comments Off on Details, both big and small, matter in new Disney Cruise Line production “Tangled: The Musical”