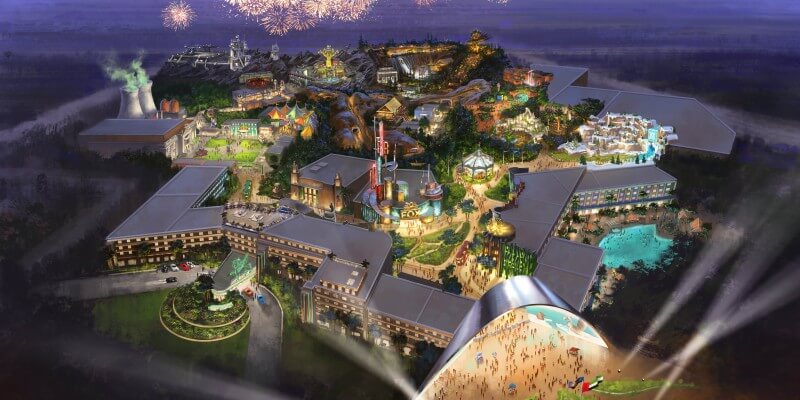 In the modern age of theme parks, it seems that when one big announcement comes, other developers like to announce their plans as well. Hot on the heels of reports that Lionsgate is looking to develop a theme park based on the Hunger Games franchise, it looks like 20th Century Fox has been hard at work on their own theme park. Back in 2014, it was reported that 20th Century Fox was looking to build a theme park off of the Miami Zoo, appropriately named Miami Wilds. We’ve received periodic updates on that park, including a possible phase 1 as strictly a water park and a mall that could potentially be the largest mall in North America. Another park based on Fox IPs is also in development in Malaysia. This is the concept art for the park in Malaysia below. Despite this, the park in Dubai is moving full steam ahead, and is looking to open by 2018. Just some of the properties mentioned by AAHG that could influence the park are Ice Age, Planet of the Apes, Titanic, Alien, Predator, The Simpsons, Rio, and Night at the Museum. Several of these properties have already made their debut in theme parks, with Alien present at The Great Movie Ride and joining with Predator for Halloween Horror Nights events. The Simpsons has also been popular at Universal Studios (Florida and Hollywood) since it replaced Back to the Future.

The IPs cited are certainly exciting and certainly have the potential to become great attractions. AAHG has already stated that some attractions will be created as dark rides, while others will be developed as thrill rides. The inclusion of Titanic in particular is interesting, because it should give developers may interesting ways to take the attraction. Alien, Predator, and Planet of the Apes all lend themselves to thrill rides, or potentially motion simulator attractions. If the park goes the Disney ride, Ice Age and Night at the Museum would most likely be excellent dark rides. Overall, the properties mentioned could really shake up the theme park industry.

With so many new theme parks in development, it might be time to ask if Dubai may challenge Orlando as the theme park hub of the world. Still, with Disney and Universal representing two of the most popular brands at the time, along with top tier theming, we would have to see a tremendous level of effort put into the Dubai parks to challenge Orlando’s supremacy. After all, if Fox World comes close to the Orlando parks, you can expect unprecedented innovations from Disney and Universal to follow. Without a doubt, competition is good for guests when it comes to the theme park industry.