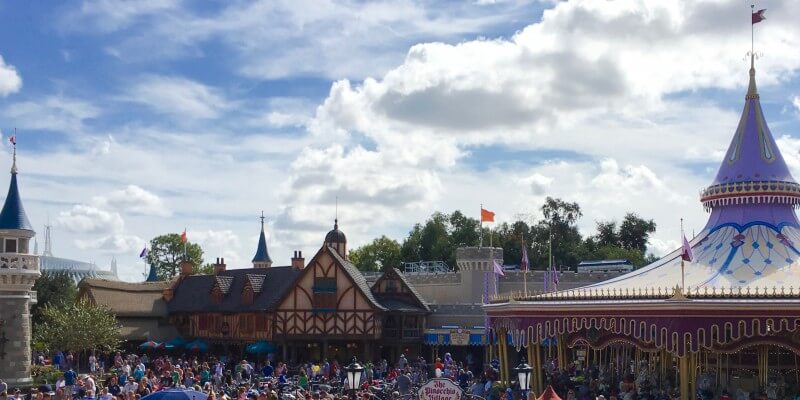 For nearly one third of the year, the Magic Kingdom at Walt Disney World hosts a holiday event party three to four times per week. From the middle of September to the end of October, guests can enjoy Mickey’s Not So Scary Halloween Party. Shortly after Halloween, one of the more amazing transformations takes place, when the Magic Kingdom switches completely over to Christmas. Starting on November 8th this year, Mickey’s Very Merry Christmas Party will take place four times per week until December 18th, with a week off for Thanksgiving.

Today, I will be talking about the best days to enjoy the Magic Kingdom during these seasons. Although the Halloween season is winding down, many guests plan their vacations a year in advance, so this article will also pertain to those who may be coming during September or October of 2016. However, the main reason for this article is to help those of you still deciding which days to visit during this Christmas season. As a tour guide, I spent much of my time at the Magic Kingdom over the last two months. I was surprised to see how huge the crowds were, especially in October. Most people know how busy Walt Disney World is during the times when kids are on school vacations, so many families choose to take their children out of school during the less crowded times. Well, this practice seems to be very common now, as there are very few quiet times at the parks. Although October has typically been a moderate crowd month, there were many times this year where I saw crowds that rivaled spring break, and even a few days that reminded me of Christmas week!

Although there were many busy days, there were also times where the Magic Kingdom was much more manageable. Figuring out the best days to visit this park during the holiday seasons is actually not difficult. You simply go on a day where there is a party scheduled for that evening. Since the Magic Kingdom closes at 7:00 on those days, many guests opt to visit this park on “non-event” dates instead. The obvious reason is that the park is open for 4-5 more hours. However, I have seen between 30-40% more people in the park on those non-event days. So, even though guests can spend more time, the lines are considerably longer for most attractions. The end result is a more uncomfortable, crowded day, with the probability of seeing much less.

Now, there are a couple of things to keep in mind when visiting on days when a party is scheduled. Just like I always recommend, you should start right at park opening. Even though it closes at 7:00, you can still enjoy a full 10 hour day with much smaller crowds. The only drawback to a shorter day is that the FastPasses run out quicker. However, if you start at park opening, the lower availability of FastPasses shouldn’t matter. You can ride many of the more popular attractions early in the day without long waits. One other thing to consider would be whether or not the fireworks are important. Unless you have an event ticket, you won’t be allowed to remain in the park to enjoy the fireworks. However, you could certainly enjoy them from a nearby resort, and the parties have some of the best fireworks displays of the year!

Again, I am offering these suggestions based on what I saw over the last month. However, there is no reason to believe that this trend will change. I fully expect to see the same type of crowd disparities during the upcoming Christmas season. Since the parties are every Sunday, Tuesday, Thursday and Friday (except during Thanksgiving week), I highly suggest avoiding the Magic Kingdom on Mondays, Wednesdays, and Saturdays.