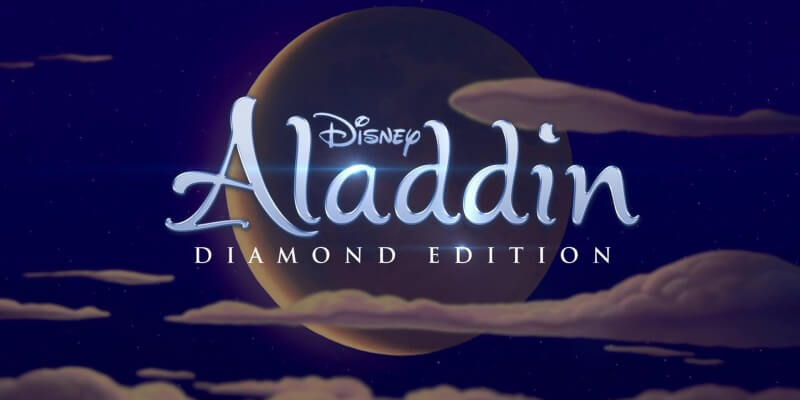 It took quite a while for “Aladdin”, one of Disney’s all-time classics, to get the lavish treatment it so fully deserved in the form of a fully remastered Diamond Edition, so it surely had to be worth the wait.

Just one look at the results prove that’s certainly the case and the generous bonus features make it a must-buy for any Disney fan.

First off, the new 1080p transfer positively sizzles with color, depth and warmth throughout the movie. Scenes in both daytime and nighttime look crisp and alive with color like never before. Combine that with the DTS-HD Master Audio 7.1 surround soundtrack that swells with movie theater-like gusto in the plentiful action sequences and musical numbers and you have one of the best Diamond Edition presentations ever.

You can see for yourself just how vibrant the picture is in this promotional clip.

There isn’t much more praise for the actual movie I can give that already hasn’t been heaped on the film since its release in 1992 as the 31st Disney animated feature. Released just a year after the resounding success of “Beauty and the Beast”, the story of “Aladdin” is just flat-out fun with superb animation mixed in with a memorable soundtrack from composer Alan Menken and a perfect cast led by the legendary Robin Williams.

As if that wasn’t enough, Disney has packed the rest of the disc with new special features highlighted by a touching tribute to Williams. The nearly 10-minute long “The Genie Outtakes” features several never-before-heard outtakes of Williams in character. Though we disappointingly don’t see actual studio footage of Williams in full Genie mode, we do get clips from the movie with sketches of the Genie performing the new outtakes expertly spliced into the scene. There are several additional special features in HD, including an in-depth look at the Broadway production.

Also included is a robust collection of classic special features from previous DVD editions. Though they are in standard definition, there is a wealth of treasures that would befit the Cave of Wonders including two audio commentaries, multiple music videos and several featurettes — including a 20-minute documentary on the music of Alan Menken.

It’s fun for the whole family, with adults sure to get all of Williams’ plentiful jokes and pop culture references, and it looks stunning in full high definition in an eagerly-anticipated edition. This is one wish granted for all Disney fans.

The “Aladdin” Blu-ray Diamond Edition is available now via Amazon and major retailers.