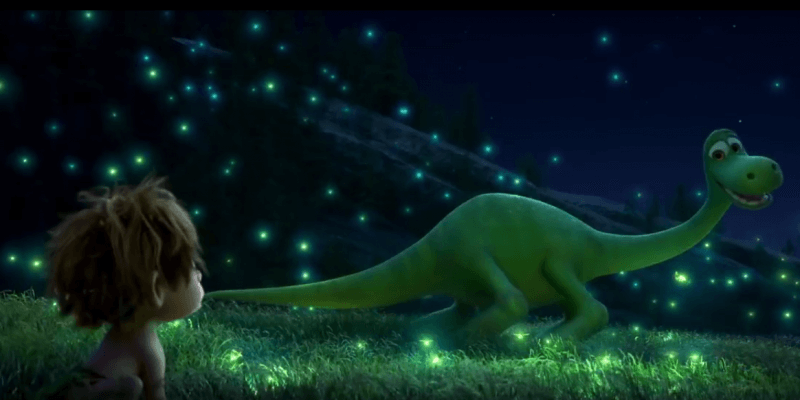 With a fairly tumultuously production schedule, especially for the always reliable Pixar Studios, many have no idea what to expect of their latest release The Good Dinosaur. With the story changing hands constantly, many have wondered whether or not the film would be able to stay with the high level of quality expected from the animation juggernaut. The release of 2015’s Inside Out furthered the reputation of Pixar, with many recognizing the film as a new creative peak for the company.

Yesterday, Pixar released the latest TV spot for their pre-historic effort. To this point, the ads have primarily focused on the beautiful landscapes and animation the film will likely be known for. They have also crystalized the central idea to the film, namely what would have happened if the asteroid that wiped out the dinosaurs had missed? So far, the human and dinosaur relationship has been fun to watch, embracing the boy and his dog narrative in a unique and fun way (the boy’s name is Spot).

The new TV spot also provides a hint of what to expect from the T-Rex’s present in the film. Early in production, some had speculated the T-Rex would likely serve a similar role to the Carnotaurus in Disney’s 2000 release Dinosaur. After all, between Jurassic Park and King Kong, the king of dinosaurs has usually been portrayed as a violent and dangerous beast.

However, this new footage shifts the narrative, with our protagonist Arlo traveling with the T-Rex’s rather than running from them. They look to become fan favorites quickly, and it wouldn’t surprise me to see them receive a similar reaction that Bruce and co. got after the release of Finding Nemo. Sam Elliot’s line “if you ain’t scared, you ain’t alive” is likely to become one the most popular lines of the film. Surely, they’re going to be exciting to watch.

The animation on display here is miraculous, with an incredible focus on setting unlike anything that Pixar’s accomplished before. This speaks to director Peter Sohn’s comments regarding the movie, stating that he saw the film as an open world similar to those in Lawrence of Arabia or The Searchers. The dual narrative of dinosaur vs. the environment and the relationship between Arlo and Spot should provide something for fans of all ages.

One interesting aspect that should begin receiving consideration, is how The Good Dinosaur will stack up in the Oscar race. In conjunction with Inside Out, it’s not hard to imagine that Pixar should have a chance to receive two Oscar nominations for Best Animated Feature. At the same time, The Good Dinosaur looks to also contend for Best Sound Editing, Best Sound Mixing, and potentially a chance to break into Best Original Screenplay. That’s not even considering a push the film may get for Score or Original Song when the movie gets closer to its release.

On another level, the success of The Good Dinosaur may actually be a negative for Pixar. In the history of the Academy Awards, only three animated movies have ever been nominated for Best Picture: Beauty and the Beast, Up, and Toy Story 3. However, in 2011, the year after Toy Story 3, the Academy changed their rules on how a movie receives a Best Picture nomination.

Now, the requirement for a movie to make the cut is that they must receive 5% of the first place votes given to Academy members. When Up and Toy Story received their nominations, the Academy was on a preferential balloting system, meaning that voters could have had each movie in their top 5 and it would help the movie receive a nomination. Under the current rules, those votes don’t matter. Since the rule change was implemented, no animated features have been nominated for Best Picture. This calls into question what Pixar should do in this situation. Considering that an animated feature has never even won Best Picture, there is reason to believe that the bias against animated films in general may be harmful to each films chances. If The Good Dinosaur is very good like many expect it to be, it may end up siphoning away votes from Inside Out.

All in all, this is a good problem to have for Pixar. With Disney also in charge of distribution for Bridge of Spies, this is an all-around great year for Disney as a critically acclaimed studio. Even with such a good year behind them, Pixar may be ready to release another instant classic in a little under a month.

Pixar’s The Good Dinosaur releases in theaters on November 25th, 2015. Inside Out will be released on Blu-Ray and DVD on November 3rd, 2015.