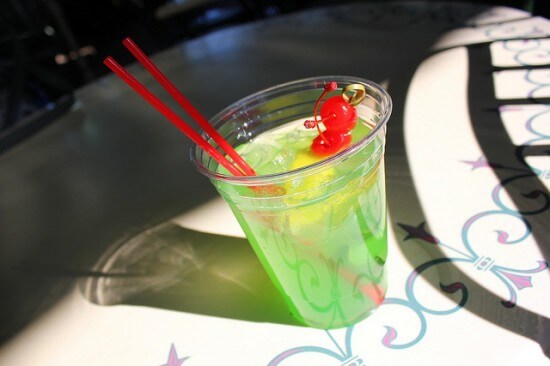 Exploring Disneyland like a foodie is a rewarding and ever-changing pursuit. Thanks to a renewed commitment from the parks to keep food offerings fresh and seasonal, there’s always something new and amazing to try when you’re at the Happiest Place on Earth. That’s why a couple of weeks ago we brought you the ultimate breakfast foodie experience, and now we’re going to turn our attention and tastebuds toward some inventive and delicious non-alcoholic elixirs.

We’re qualifying these beverages as “foodie-appropriate” because they present at least two of the following culinary qualities: decadence, uniqueness, excellence, and renown. We’re also tipping our hats to the makers of the Wizarding World of Harry Potter’s Butterbeer, whence, we are convinced, the sudden influx of fantastic booze-free blends for theme parks originated. And now, the drinks!

Let’s kick things off with probably the weirdest drink of all the unique beverages at Disneyland. The rose petal soda is available in the lounge at Carthay Circle, and that’s a good place for it. The atmosphere you’ll drink it in so fully transports you back in time that it makes it feel almost natural to drink something so seemingly strange. And yet this drink is also familiar. The sparkling water of this surprising soda has a gentle hint of rose essence, making it not unlike drinking a carbonated herbal tea. That pretty  garnish is an edible, sugar-glazed, organic rose petal!

We’ve said it before and we’ll probably say it again. We love Disneyland’s faux mint julep. This drink tastes nothing like an actual mint julep, but, owing to its mesmerizing, radioactive green, is its own version of magical. You can find it all over New Orleans Square, and in table service locations it comes with free refills. The garnish of lemon slice, cherries, and fresh mint leaves makes it a fun drink to take on a walk around the park. And, unlike a most of the other drinks on our list, it comes with a lid so it’s easily portable.

If you’ve spent any time in Arizona, you’re familiar with the wonders of the bright pink prickly pear. Disney was a little shy of calling the special flavoring in this soda what it actually is, but naming it “desert pear” doesn’t change its awesome, sophisticated taste. If you’re new to this cactus-born treat, don’t expect any kind of recognizable pear. In fact, the main flavor you’ll notice in the drink is what Disney calls “mojito” (quotes intentional). And the drink’s fizz comes from a topper of Sprite.

Oh, lordy, this drink is delicious. It’s made with a base of sparkling apple juice, but the real treat is the toasted marshmallow syrup. There’s not a lot of it, and they pump it in first, so if you’re sharing the Freeze with a buddy, definitely make sure to score the inaugural taste. Wiggle the straw all the way down and sip up the heavenly ambrosia from the bottom of the cup. The passion fruit-mango foam on top isn’t bad either.

Okay, time for some slushies. First, it’s the Honey Bee, which is a sweet concoction of frozen lemonade, cherry flavor, and honey. Actual honey! Those three flavors alone are a surprisingly harmonious mix, since the aromatic honey keeps the lemonade and cherry from being cloying. Then, the slush blend is topped with whipped cream and pierced with a honey-flavored icicle. Bother!

The second frozen beverage on our list is pretty tame compared to the others, but it has two things the others lack. Unlike many of the specialty drinks now at Disneyland, this one’s made from lime. Frozen limeade is blended with pomegranate and topped with citrus fruit foam. Yum. The best part, though, is that the whole thing is then dusted with silver sparkles. Edible pixie dust!

Given that the atmosphere at PCH Grill has all the magic of an old box of cancelled checks, it’s kinda of shocking that something so entirely sparkling could come out of there. But it’s true! The Party Wave Lemonade starts with  – you guessed it – lemonade. From there, it pretty much crowns itself emperor. Coconut and banana shots mingle with the lemonade, and the whole thing is topped off with whipped cream and a garnish of dark chocolate shavings and a sugar-glazed, honey-infused, baked banana slice. MAJESTY. But wait! We’re not done. You drink this thing out of a coconut mug.

If you find yourself in need of some bonus beverages, consider the simple strawberry milk at Bengal Barbecue, River Belle Terrace, and Jolly Holiday Bakery or the Decadent Drinking Chocolate (with biscotti) at Ghiradelli. The later is made from “melted chocolate drops.”