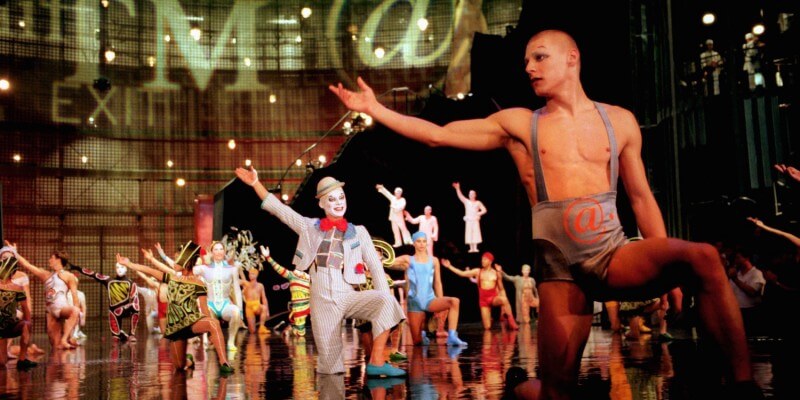 With Downtown Disney’s recent official change to Disney Springs, a longtime mainstay of Walt Disney World’s biggest shopping and dining district is celebrating its own milestone.

Cirque du Soleil’s La Nouba show has been running at Walt Disney World for many years and as the show approaches an impressive 8,000 performances, they recently decided to pull back the curtain for us to glimpse a rare look at what it’s taken to consistently entertain audiences of hundreds every week.

La Nouba is a Cirque show at its heart. It has stunning visuals, daring acrobatics, interesting characters, and some rather amusing clowns, all wrapped us in an artistic style that is distinctly recognizable. But this show was developed with the Disney tourist audience in mind, so it never ventures too far into the “artsy” aesthetic, remaining universally relatable with a simple story intended to show off an hour and a half of fun.

The performers are a mix of newcomers and longtime veterans, each adding thetime with own flair to the troupe. All the show’s characters are quirky by design, portrayed perfectly by the actors. The current cast features a lead singer formerly of “The Lion King” on Broadway who has one heck of a powerful voice, a real treat for Orlando audiences. And the live band adds to the on-your-toes feeling of the whole nonstop show.

But naturally, with such a long-running show, pieces of it feel a bit dated. The theater is showing its age and so are some of the acts that clearly have not been updated for today’s demanding audiences. Fortunately, Cirque allows much freedom when the show inevitably changes directorial hands. A couple of years ago, current artistic director Daniel Ross took the helm and immediately saw some changes he wanted to make to keep the show fresh. He added more appearances by the show’s comic relief-providing clowns, which brings a good break from the high-energy acts in between. And the clowns are downright funny, creative characters of their own, far more enjoyable than your average circus clown. They are able to engage with the audience in an honest way, never resorting to insulting anyone. It all feels appropriately innocent.

Other changes on the horizon recently announced include replacing the show’s two opening acts, beginning in December. The somewhat long winded jump rope routine is being replaced with breakdancers. The high wire act will be changing to a different aerial act with a bamboo pole.

Ross explains the frequent changes to the show: “When we have new people coming in, we try to let them influence the show and make it something else. As a result, La Nouba is still very fresh after 18 years. It’s a show that’s still alive, it’s still current, it’s still real, it’s still true to the moment. So it’s something that we really take pride in.

As one might imagine, it takes a rigorous training and rehearsal routine for La Nouba’s performers to be consistently ready for the show. Each act is much more difficult than it seems, but they make it look effortless. A particularly elegant segment features performers gliding through the air on long red silks, but reporters in attendance at the recent behind-the-scenes look learned from hands-on “training” that it takes quite a lot of practice to make it look as beautiful as it is. Likewise, the heights they reach during the show are much more extreme when seen from their vantage point high atop their performance platforms. And thus reaching 8,000 shows is quite a feat knowing just what it takes to regularly put on – and occasionally improve – this piece of Walt Disney World history. Even amidst all the changes to Downtown Disney, it’s clear that while Cirque du Soleil may not be selling out every single show, they are dedicated to providing audiences with unique entertainment that cannot be seen or duplicated anywhere else on Disney property, keeping them a valued part of Walt Disney World’s past, present, and future.