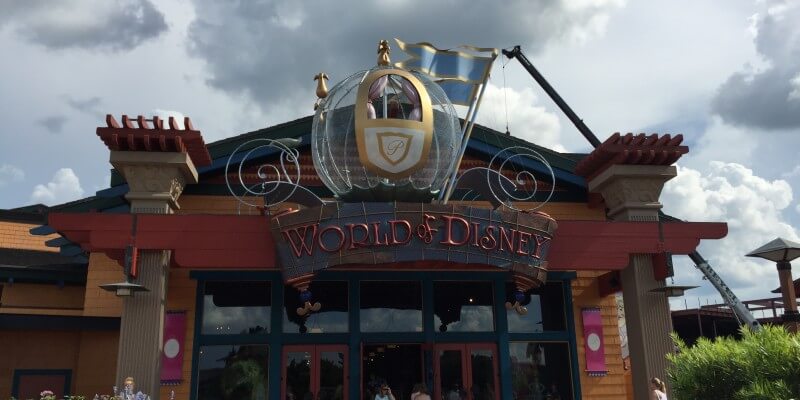 With so many changes happening to Downtown Disney as it transforms into Disney Springs, it’s hard to keep tabs on everything. One noticeable transformation that’s been ongoing is the expansion of the ‘World Of Disney’ located in the Marketplace District.

This is one of the largest Disney branded merchandise stores in the world, and it’s getting even bigger. There’s been no word on what specifics will fill the new areas of growth, but what is known is that noticeable changes have been occurring indoors, not solely on the exterior. When entering the store, previously in the center forum stood a central merchandise display, topped with a large-scale model of Cinderella Castle. That display has been removed, leaving a vacant yet more open comfortable hole to help with guest flow. In the same area, you’ll also notice that the ornate larger than life figurines have also been removed from the ceiling. For now, the floating Disney characters still reside in other areas of the store. Finding yourself in the current/former jewelry room that had a theming overlay to the Disney Villains, changes here are also noticeable. Gone are the ticking crocks that adorned the back wall, now there’s a temporary façade up which is creating the border between the old and the upcoming expansion. Moving towards the Disney Princess room, another large merchandise display has vanished. In this open area, a large Genie figure from Aladdin stood prominently for years and years. Most famously, during the holidays he would be adorned with a large santa coat and hat, providing an impromptu photo op for visiting guests. Once in the princess room, you’ll notice some velvet curtains hung across the ceiling. These address the temporary walls set up to hide even more expansion just on the other side. As always, keep following Inside The Magic for more updates on the current transformative state of Downtown Disney into Disney Springs.