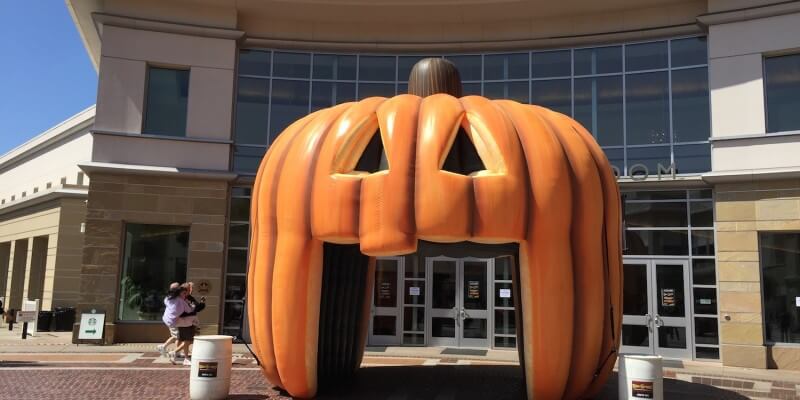 This past weekend ghouls and goblins gathered for the unofficial beginning of the Halloween season at the Scare LA convention in Pasadena, California. This is the third year that Scare LA has enticed horror fans but the first in its new home at the Pasadena Convention Center. Having attended last year I was thrilled with the new location offering much larger spaces and ample parking choices. Arguably the most anticipated panels of the weekend were announcements from Halloween Horror Nights at Universal Studios Hollywood and Knott’s Scary Farm the first theme park haunt dating back to 1973. Both Universal and Knott’s had special guests in store for the audience. Universal brought with them Malak Akkad who has a long history with the “Halloween” movie franchise to announce the maze “Michael Myers Comes Home”. The crowd roared with excitement with the first sounds of the iconic “Halloween” musical theme. That was the only new maze announcement in store for us from Halloween Horror Nights.

Knott’s Scary Farm also announced one new maze called “Dead of Winter” which will feature bright lights and whites, contrary to most traditional haunted mazes. Another new announcement for Knott’s Halloween season is a tamer Halloween celebration featuring Snoopy and The Peanuts gang during daytime hours. They ended the presentation with an appearance by Cassandra Peterson (better known as her alter ego Elvira) to announce a brand new stage show coming to Scary Farm.

There were so many interesting panels throughout the weekend making it impossible to attend them all, but some notable ones included “Legend of Disneyland’s Hatbox Ghost”, “Making Monsters: The Art of Terror”, “91 Reasons Podcast Live!” & “Disembodied Spirits: Voice-Over Experts” featuring voice talents from The Twilight Zone Tower of Terror and The Haunted Mansion. In addition there was a screening room where I was extremely happy to stumble upon the first thirty-seven minutes of the unfinished documentary “Haunters: The Movie”. The film features traditional haunts as well as interactive and extreme haunts. I absolutely loved what I saw and can’t wait to see the finished film.

Scare LA brought back the mini-haunts where guests get to experience much smaller versions of some of the haunts to look forward to later this year. Included were “The Haunted Stadium’s Exorcism”, “The Curse of the Devil Swamp”, “Spooky Hollow’s Legends of the Swamp”, “Drunken Devil – The Sinner’s Soiree”, “Fear Station’s The Birth of the Windigo” & “Figment Foundry’s Goblin Underground”. A nice addition to the new convention center was that the mini-haunts were featured in their own separate space which allowed them to be kept dark. Last year they shared the show floor with vendors and had less control over lighting. The amount of talent on the show floor is undeniable featuring a plethora of extraordinarily talented makeup artists, unique haunt experiences, boutiques, and the popular Decayed Brigade Slider Show. Whether you were shopping for your professional haunt or hobby home haunt there was plenty of inspiration and product to be found.

For the haunt community Halloween is a year round holiday, but attending Scare LA in early August is our permission to come out from behind closed doors (or locked cages) and start scaring and doing what we do best. This year’s Scare LA was definitely an improvement to last years and I only see this becoming grander and scarier as each year passes.