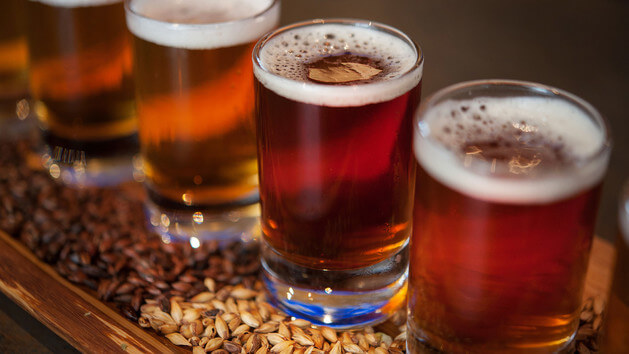 So you’ve got an occasion to celebrate. Here’s everything you need for you and your crew to man up with the ultimate bachelor weekend at Disneyland. And of course we’d like to point out that guys’ weekends and bachelor parties are meant for all types of gents – not just sports-watching, beer-drinking types. That’s why you’ll see things to do that cover a range of interests. If we didn’t appeal to your idea of a great guys’ weekend away, let us in on how you and your friends would do it.

First things first, there will be no driving home after these nights, so make it a legit event and book a room you all can walk back to. The Disneyland Hotel is a classic choice. It sleeps up to five in a room and is tastefully outfitted in bronze and blue with plaid accents. After these jam-packed days, you’ll be ready to crash there.

When you’ve got your bearings, head over to California Adventure via the hotel guest entrance at the Grand Californian Hotel & Spa. While you’re walking through the hotel, stop in at Mandara Spa and book up some advance times for the end of the weekend. For real. After a few days of drinking and sunning, you and your pack might like to detox with some deep-tissue massages.

Once you’re in the park, you’re on a mission. Your day is going to need some fuel, and Smokejumpers Grill is right inside the side door, so head there first for a bacon cheddar burger and some smokin’ onion rings. Wash it down with non-alcohol for now. Why? Because, if you play it right, we have an excellent way to drink for cheap and have some fun in a series of competitions where the lowest score buys the round.

Round 1: Low score at Boardwalk Games buys a round at Bayside Brews. We suggest the Sierra Nevada Pale Ale. The jalapeno cheese-filled pretzel is a mighty delicious accompaniment.

Intermission: Let the soothing sound of NPH’s “Ready, screamers?!” draw you to the twisting turns of California Screamin’.

Round 2: Low score at Midway Mania buys a round at Cove Bar. We suggest the tequila flights. The tri-tip sliders are fantastic if you’re hungry.

Intermission: Cruise for some man souvies at Ramone’s House of Body Art. The lines of merch at Ramone’s celebrate car culture and are the most unique and well done in the park. If you’re missing your Betty, this is a good spot to pick up something for her, too. On the sly, of course.

Round 3: Second place car at Radiator Springs Racers splits a round at Sonoma Terrace, your home for craft beer at DCA. We suggest the Sculpin IPA. Pair it with the cold cut plate as needed.

Drop in at the Hollywood Tower Hotel, then grab a snack at Award Wieners, where you should be able to come up with at least three inappropriate jokes about their claim to have the “best wiener.” If you’ve had your fill of meat and wheat, opt for a sweet or a (limited time) Spicy “Fear” less Lemonade, spiked with chipotle pepper. Finally, head back to the Grizzly Peak area to exit the way you entered DCA, but stop first for a plunge down Grizzly River Run. You can grab some dry clothes (including some rustic, non-Disney gear) next door at Rushin’ River Outfitters.

At night, gather your boys for nighttime eats at House of Blues. The Crossroads has got the biggest menu on DLR property and huge portions, so there should be something for everyone. Another bonus, the music is so loud you can use it to take a break from chatting. Not that you’re not bros, but everyone needs a little down time.

After dinner, you’ve got a couple of options: music or movies. If you plan to stick around HOB for a show (they’re always good), consider getting advance tickets for national acts. Otherwise, just enjoy the local and regional sounds that play this stage. If you’re looking for a blockbuster of a different kind, head across the way to the AMC theater and hit a movie.

Another day, another test of skill. On your way out the door to Disneyland, stop at guest services in the Disneyland Hotel lobby and pick up a few copies of the Pirates Life trivia kit. Those will come in handy later. Then, start your morning off right with a decent breakfast. You’ll find that at Tomorrowland Terrace in the form of a breakfast burrito. Chorizo? Check. Eggs? Check. Potatoes? Check. It even comes with a side of fresh fruit, for balance. While you’re there, grab a Boba Fett stein and get it filled with your beverage of choice. Ain’t no booze at Disneyland.

A lack of adult beverages in the park doesn’t mean a lack of competition. These games pay out later, so keep track as you go and make the appropriate party pony up when the time is right.

Round 1: Low score at Buzz Lightyear Astro Blasters buys a round later at Hearthstone Lounge. We suggest the Red Stag Lemonade. Like you’re NOT going to order something with “stag” in the title. Tease your appetite with the sticky spare ribs.

Intermission: Knock out the additional man-friendly rides in Tomorrowland while you’re there. Autopia, Space Mountain, and Star Tours will get you well on your way toward lunchtime. Split a pizza at Redd Rockett’s Pizza Port when you get hungry, or check out Edelweiss Snacks if you want something portable.

Round 2: Low score at the Shootin’ Exposition buys a round later at Trader Sam’s. We suggest the Passionate Python. Cue another round of jokes, and while you’re on a roll, add the pu pu platter to your friend’s tab as well.

Intermission: Hit Big Thunder, then paddle those Explorer Canoes like men. After the workout, cool off in the Pioneer Mercantile, where they sell some understated gear in a frontier environment. If you want additional intermission time, tangent to Critter Country for a beverage refill at the Hungry Bear and a spin through the hat selection at the Briar Patch.

Round 3: Low score on the Pirates Life trivia challenge buys a round of corn dogs at the Stage Door Café.

Finish out your day at Disneyland by adventuring through Indiana Jones and the Jungle Cruise. As you exit the park, stop at Disneyana and check out the collectables you might need.

After you get cleaned up, head back out for a night of cashing in on the liquid prizes you acquired by dominating at Buzz Lightyear and the Shootin’ Expo. Cheers!

You and your homies really only have a partial day left of the weekend, so this is a good time to take it easy. Start with a morning lap around Downtown Disney. Shop it up at gentleman faves The Lego Store, D-Street, and Fossil, which will cater to all of your geek and gadget needs. If you’re feeling it, test drive some Ridemakerz demo cars. Then head over to ESPN Zone to continue your tourney.

Round 1: Low score at ESPN Zone Sports Arena (the upstairs gaming haven) buys a round at the adjacent bar. We suggest screwdrivers or bloody marys, since it’s brunchtime.

Intermission: Take a walk to the Paradise Pier Hotel, home of the last remaining hotel arcade on property. And we use that term generously.

Round 2: Low score at the Paradise Pier arcade closet buys a poolside round when you get back to the DL Hotel.

Intermission: Check out of your room and then hunker down by the resort pool for most of the rest of the day. If you’re flush, put in for a cabana. It’ll give you respite from the sun, as well as a million towels, fresh fruit and cold water, and personal service for when your buddy orders that round he owes you.

No worries about getting put back together after the pool. You’ve got your spa time all lined up and can use the facilities in the locker room at Mandara.

Up next week: Do Disneyland Like a Foodie – Breakfast