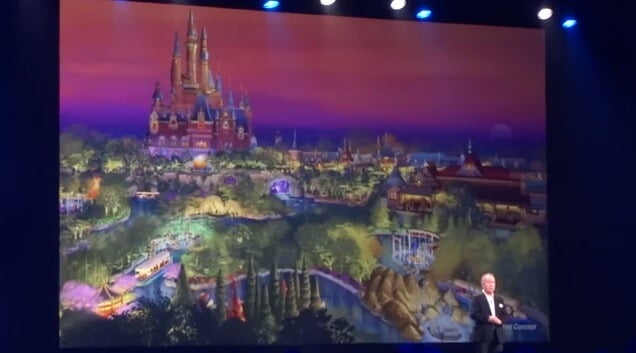 At the D23 Expo 2015, Disney unveiled some cool new footage and pictures of attractions and areas coming up for Shanghai Disneyland. The first land you will encounter when steeping your foot into Shanghai Disneyland will be Mickey Avenue, not Main Street as we are used to. You will be greater by Disney friends such as Mickey Mouse and Donald Duck and each store features a Disney character as the proprietor. Mickey Avenue connects you to the Garden of Imaginations, which is Shanghai Disneyland’s hub. Tomorrowland is the land of unlimited possibilities and the centerpiece of this land will the Tron Lightcycle Power ride, which will be one of the fastest rides in any Disney Park. The most mysterious land will be Adventure Isle, dominated by the huge mountain, Roaring Rapids. Inside the mountain you will encounter one of the most terrifying reptilian monsters around. The final centerpiece of Shanghai Disneyland will be the Enchanted Storybook Castle, Disney’s biggest castle yet. The castle will feature a restaurant where you can dine with Disney royalty, a water ride that travels underneath the whole castle and an interactive attraction that features Snow White. Comments Off on D23 Expo 2015: First look inside high-tech “Pirates of the Caribbean” ride among new Shanghai Disneyland details revealed