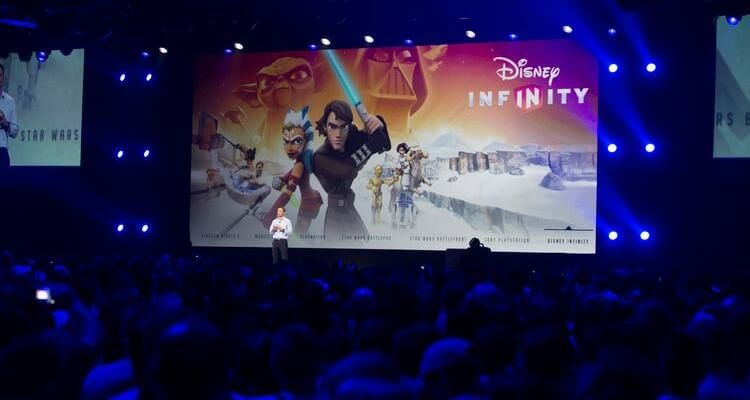 Disney Interactive’s presentation at the D23 Expo 2015 was filled with surprises. The biggest surprise came at the end of Disney Interactive’s presentation when cast members from “Star Wars: The Force Awakens” came out as part of the reveal of an upcoming Disney Infinity play set based on the highly anticipated film.

Co-stars John Boyega and Daisy Ridley gave away their character figures, Finn and Rey, for the upcoming Play Set based on the film. In addition, select “Star Wars” figures for Disney Infinity were shown off to have light-up light sabers. Available this holiday season, these figures will have lightsabers that light up when placed onto the Disney Infinity Base. Figures include Luke Skywalker, Darth Vader, Anakin Skywalker, Yoda, Obi-Wan Kenobi, and Kanan Jarrus. Also coming to Disney Infinity are “The Good Dinosaur” and “Zootopia.” And the ultimate unlock for Disney Infinity 3.0 was announced as Sora’s Keyblade from Kingdom Hearts.

Revealed for the upcoming Star Wars Battlefront game is downloadable content (DLC) from “The Force Awakens” called the Battle of Jakku. It will be free to download. A limited edition Darth Vader-inspired Battlefront Playstation 4 will also be released with the game in November as part of a bundle. The popular Star Wars Battlepod arcade came was announced to be available in a Premium Edition for home use with leather seats and a custom name engraved on the machine.

The standard edition is $35,000 and the premium version is a massive $100,000 – not including shipping. Orders begin next month. While fans await some real solid news for Kingdom Hearts 3 (like a release date), Disney did reveal one of the areas that will be featured in the game.

“Big Hero 6” will be a prominent part of Kingdom Hearts 3. The announcement was made as Baymax himself came on stage. It’s a line of wearable toys that combines active play with video-game mechanics. Check back later for even more videos!