A Celebration of Harry Potter 2015 has wrapped up at Universal Orlando, drawing thousands of fans of the film franchise – many in costume – together for an exciting weekend of fun.

Following Friday’s red carpet opening events, Saturday and Sunday were filled with presentations and interactive opportunities to see celebrities and hear from some of the people who helped create the movies and theme park attractions.

On Saturday, the highlight of the day was watching Luna Lovegood actress Evanna Lynch take the stage alongside costumed fans in a magical duel against (the world’s only) wand combat choreographer Paul Harris. Harris worked with all the stars of the “Harry Potter” films to create the “physical language” of how their wands would be have when attacking and defending and he continues to take his role very seriously. Meanwhile, Lynch – an avid Potter fan herself – simply had fun up on stage, comparing some of Harris’ moves to a funky dance, much to the delight of fans.

Watch the must-see video below to see how it all unfolded.

In a private press Q&A following the public demonstration, Harris could not comment whether he will be involved in the upcoming “Fantastic Beasts and Where to Find Them” films, extended the Potter narrative. There’s no doubt he would like to, as does Lynch though she fully realizes there is no place for Luna in those stories. 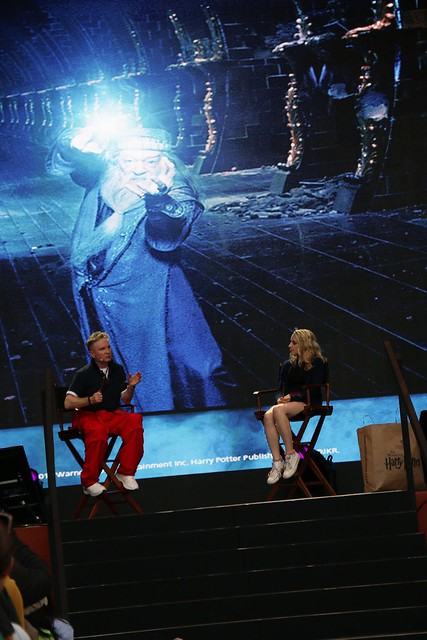 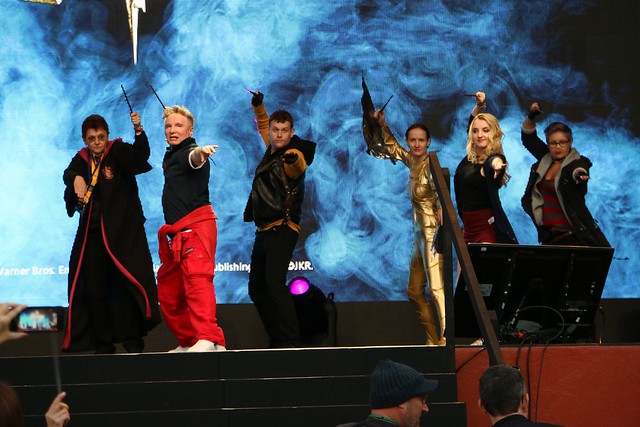 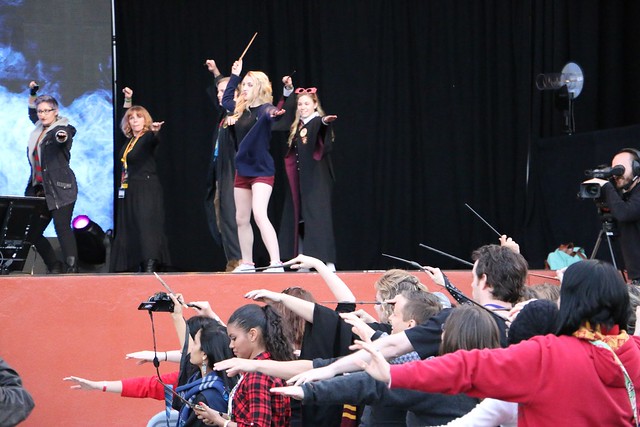 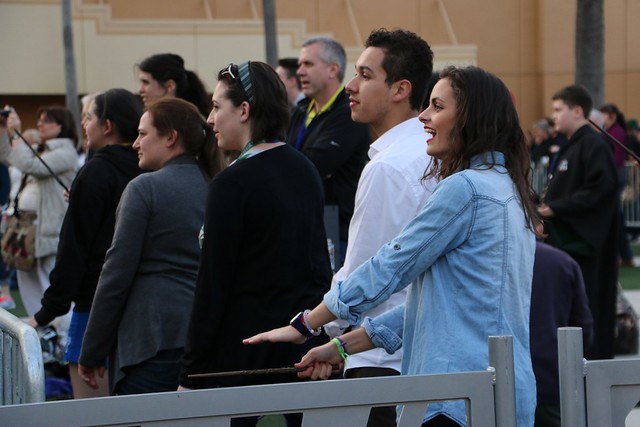 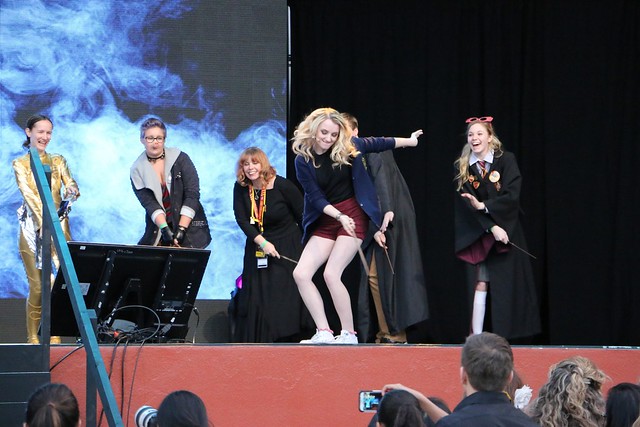 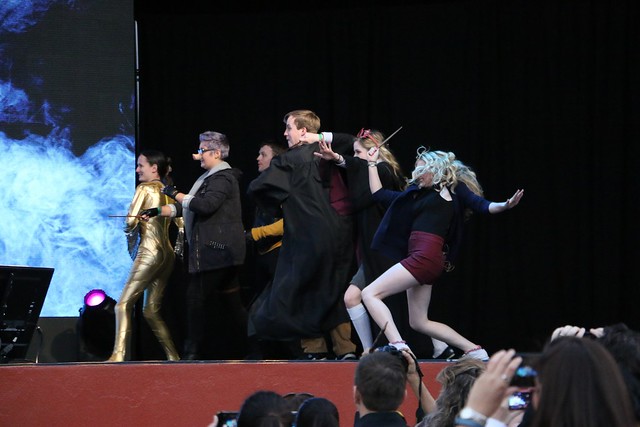 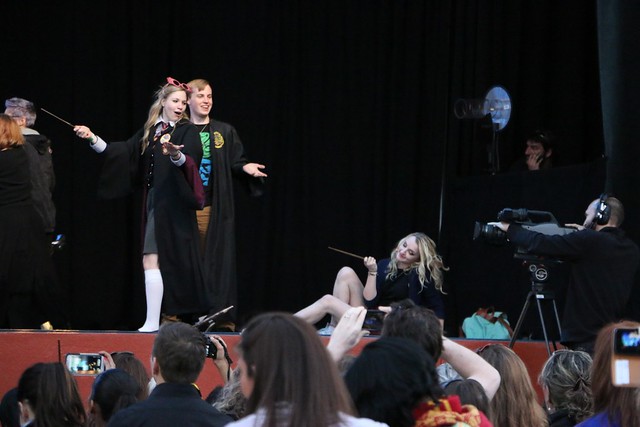 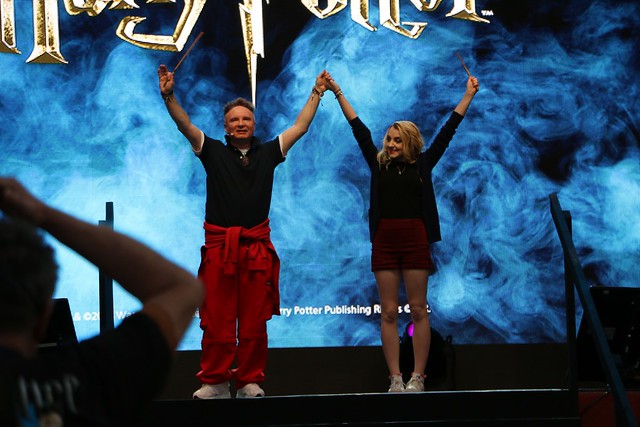 Another interesting addition to this year’s event was a presentation by “Harry Potter” book illustrator Kazu Kibuishi, who gave live demonstrations of how he used Photoshop to draw the newest covers. He compared his visual style to “al dente pasta,” as he stops digitally painting just before they’re fully detailed to allow readers’ imaginations to fill in the rest. Using a drawing tablet, standard brushes, and a bit of color theory, Kibuishi created the new covers with his own favorite style and palettes, working from cold to warm colors. 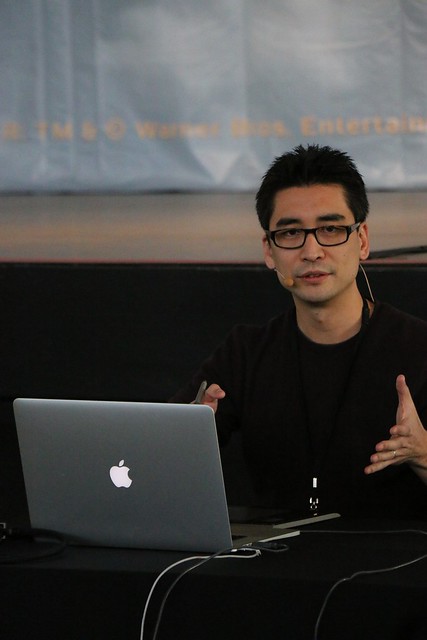 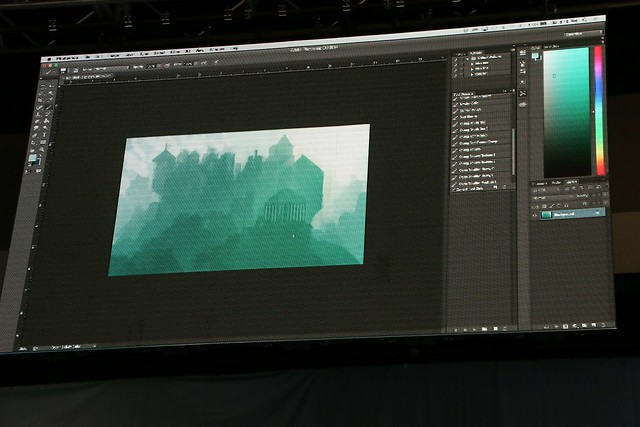 On Sunday, fans were given a behind-the-scenes peek at how the new entertainment was created for the Wizarding World of Harry Potter – Diagon Alley, including the Tale of the Three Brothers puppet show and the always-popular performances by Celestina Warbeck and the Banshees.

On stage were Alan Gilmore, Art Director for the “Harry Potter” films, and Mike Aiello and Patrick Braillard of Universal Orlando’s Entertainment team. They offered first looks at some of the artwork used to develop the live entertainment featured in the Wizarding World expansion that opened last year, followed by answering some excellent fan questions, all seen in the video below.

Naturally, questions were asked about potential future expansions of the Wizarding World of Harry Potter, to which nothing firm could be said, though Gilmore has repeatedly noted that he thinks the Ministry of Magic would make a fine addition to the theme park collection.

A Celebration of Harry Potter continues to be a success for Universal Orlando, adding to the excitement already generated by the Wizarding World of Harry Potter and its signature attractions. No plans have been announced for another event next year, but as Potter expands westward to Universal Studios Hollywood, there’s no doubt its popularity will bring more unique opportunities to see celebrities and be further immersed in that magical world.

More photos from A Celebration of Harry Potter 2015:
(Photos by Ricky Brigante and Karin Yarnell)