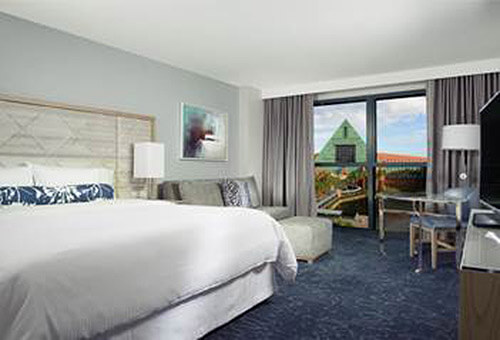 Walt Disney World announced the Swan and Dolphin Hotel is getting the largest makeover in its history in a multi-phase, multi-year, $125 million redesign project. Every guest room will receive a new design in the 758-room Swan Hotel and the 1,509-room Dolphin Hotel.

The new room design is inspired by the resort’s water-themed architecture. The goal was to create a serene and sophisticated atmosphere. The new guest rooms will feature upgraded furniture and technology, including large HDTVs and more power outlets. They’ll include Westin Heavenly Bed with a pillow-top mattress set and down blanket.

The new bathroom will include a back-lit mirror mounted on iridescent glass tiles.

“As we celebrate the hotel’s 25th anniversary, it is appropriate that we mark the occasion with a renaissance of our room product,” said General Manager Fred Sawyers. “Our guests will continue to receive the level of service and hospitality that comes with a quarter century of experience while enjoying a modern new guest room.”

The project starts at the Swan Hotel, with approximately 500 of the 756 rooms redesigned by the end of 2014. The first phase of the Dolphin Hotel rooms will begin in 2015 with the entire rooms project currently scheduled for completion by the end of 2016.