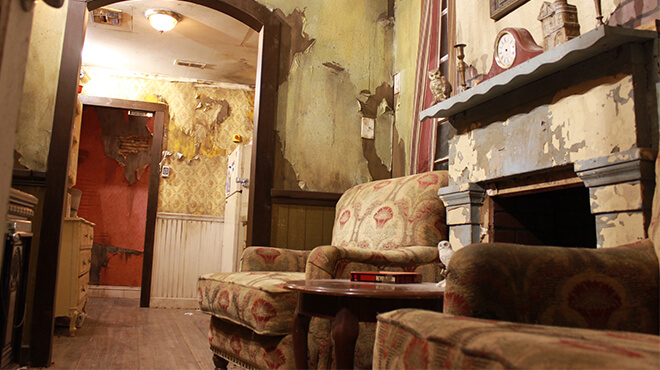 The premise of “The Purge” has become an instant hit among Halloween events. When all crime is legal for 12 hours, including murder, the chaos that ensues is perfect to wreak havoc upon guests in attractions nationwide.

“The Purge” has inspired scare zones at Universal Studios in California and Florida as well as an independent haunted attraction from Blumhouse Productions last year.

For 2014, The Purge: Breakout pits guests against the clock to survive the final 30 minutes before the annual kill fest begins. It’s an escape room concept taken to a new level.

Impressively contained inside truck trailers, The Purge: Breakout features multiple highly detailed, believable environments that contain puzzles that must be sequentially solved in order to escape. Failure to make it out in time results in, well, being purged. From the moment you step inside, the adrenaline hits upon the realization that you’re locked inside a small cage with only a dim light on to figure out how to proceed. You quickly realize you’re not alone, as a chained up girl is just beyond the bars holding you in. Her role is to not only play a fellow victim of Big Daddy – your captor – but also offer occasional hints to ensure you have a fighting chance. She keeps the action moving throughout the experience without ever giving too much away. It’s a fast paced, fun adventure that stays interesting until the very end. Quick thinkers that are also daring will fly through a few of the puzzles. But some are designed to trip just about anyone up. And nothing is more frustrating than the lights going out every 5 minutes as the countdown to The Purge is announced.

The record for successfully making it through is around 22 minutes. But most do not – at least not on the first try.

Teamwork is essential to move fast, so bringing a few smart, but calm friends is a must. Small groups can enter together to try to conquer the experience. The Purge: Breakout is a fantastic evolution of the escape room concept, existing somewhere between that and an interactive haunted house. But it’s only around for a limited time, having returned for this Halloween season through November 2 in Los Angeles. At roughly $30, it’s money well spent to have a fast-paced thrilling time using your brain while simultaneously being entertained.

More information can be found on the event’s web site.

Comments Off on The Purge: Breakout makes you fight for your life in a high-energy escape room experience