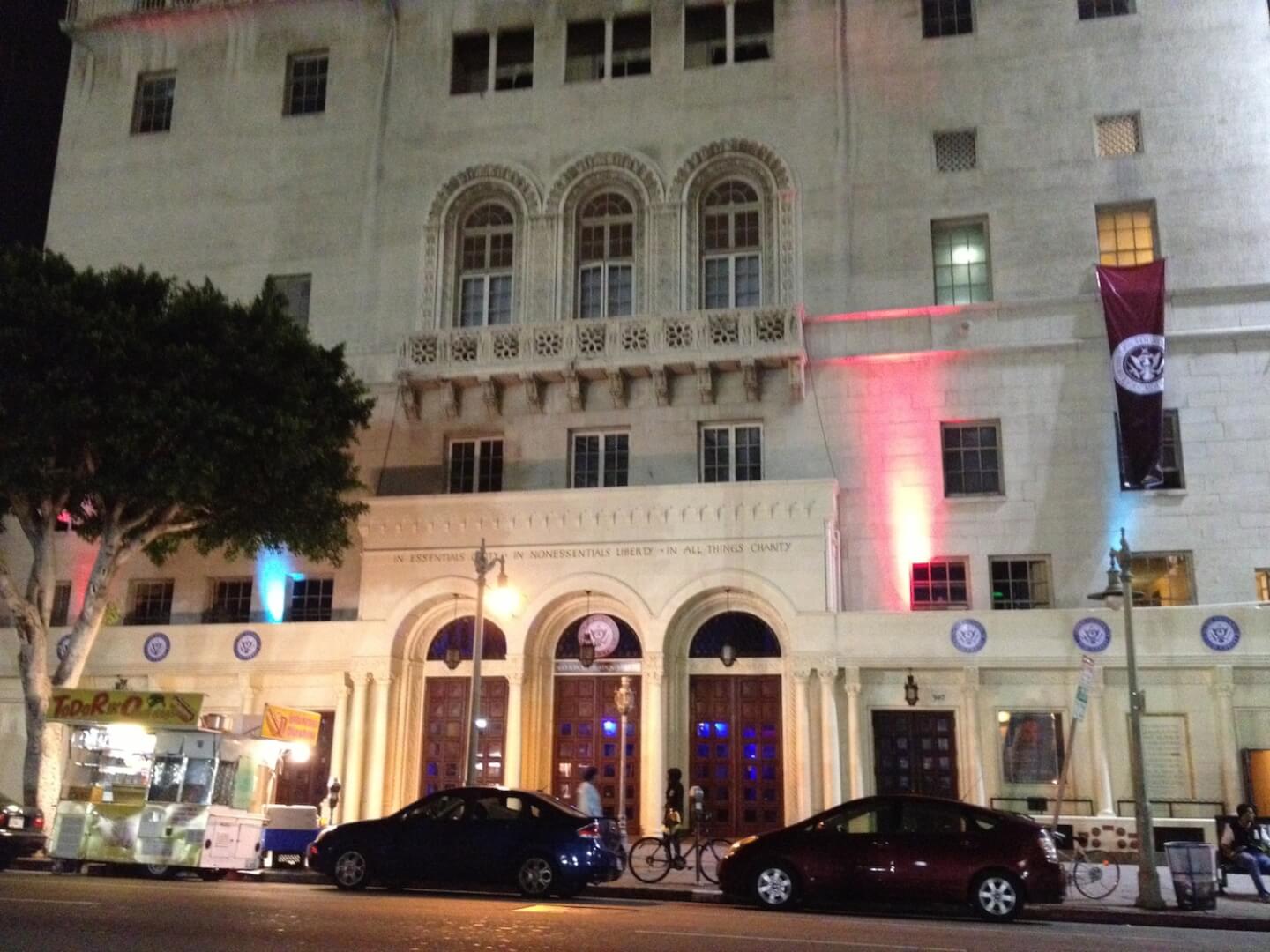 Running through an old theater in downtown Los Angeles at gunpoint is not how I expected my Friday night to end. But that’s exactly what happened to me two weeks ago when I experienced The Purge: Fear the Night. But no knowledge of that film is necessary to thoroughly enjoy this action-packed adventure, perhaps other than to learn that in this tale all crime is legal for 12 hours each year on an evening known as, well, you know.

The Purge: Fear the Night is not a misnomer, as all hell quickly breaks loose within minutes of stepping inside this attraction. It’s not “haunted” by ghouls like so many Halloween mazes, instead filled with realistic madmen waving weapons and shouting profanity-laced orders. It’s a shock after the experience starts off so gently, with small groups of participants given badges and asked to take a seat in the old LA theater to watch a political victory speech. But after being led backstage by a friendly hostess, things rapidly devolve into a violent mess sending all visitors on a wild hour-long chase around every corner of this old six-story building. Along the way, it’s quickly learned that there is a “New America” forming as a result of The Purge, but resistance fighters aim to stop it, forming two factions and leaving visitors to decide whose side they are on. There’s a search for a key and an access card, throwing open doors and trashing rooms to find them. Nowhere is off limits, not even disturbing a man on the toilet or pulling items from dead bodies. It’s a constantly on-the-move experience that sends guests from one location to another faster than anyone is able to grasp what’s going on around them. Whether being loaded into the back of a truck or flying up an elevator, there is always someone urging the group forward, generally by waving a gun.

At some point, I found myself pulled into a hospital room and forced to put on latex gloves to help deliver a baby – only to be asked to kill it immediately afterward. But as with the rest of the experience, the story moved on before I even had a chance to react. And yes, those now-famous masks from “The Purge” are present, but appearing by surprise, at least one time in a particularly inexplicable (but welcome) break from the action starring two scantily clad dancing girls. In the end, this already thrilling adventure culminates with a way over-the-top grand finale that’s one notch short of an actual war scene. It’s loud, intense, and a perfect way to complete an already hectic experience. Afterward, a lounge allows guests to calm down before leaving and discuss what just happened over a few drinks while enjoying some live musical entertainment. On the evening I was there, things got a little wacky as the crazy group I had the pleasure of going through this experience with included a pair of showmen who decided they needed to climb onto the stage and (poorly) sing a bit of Marvin Gaye while wearing crazy masks. And producer Jason Blum was there relaxing, laughing along, ultimately joining in the insanity by donning his own mask and dancing along. It was the perfect end to an already wild night. The Purge: Fear the Night continues on select evenings through November 2. Tickets and more information can be found at PurgeLive.com.