“Deep” in the woods of L.A.’s historic Griffith Park lives the Los Angeles Haunted Hayride during the Halloween season and this year it’s bigger and better than ever. In addition to the signature hayride they have added additional attractions to make it an evening full of entertainment. 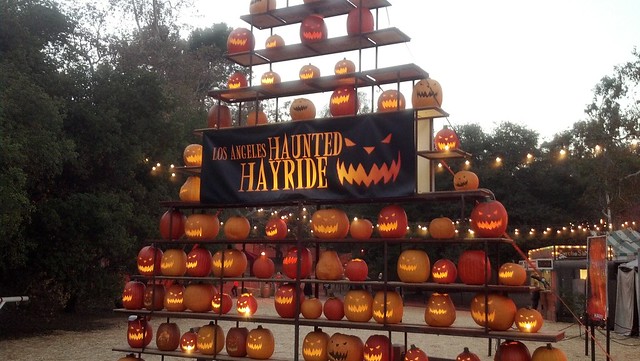 The first area that you will visit to purchase your tickets, grab some food and travel from one attraction to the next is known as Purgatory. Here you will come across the characters that inhabit this haunt. From twisted scarecrow-like characters to skeleton brides and beyond they all live here in Purgatory. This area is pretty well lit for a Halloween event so it seems as though special care was taken for the makeup effects used on these characters as they were rather impressive. In Purgatory you may also come across impromptu performances from creepy dancers throughout the night. 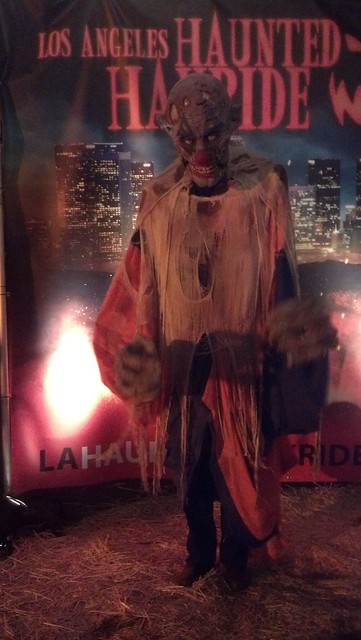 What I want whenever I go to an event is to see something I’ve never seen before. The walking grounds of the L.A. Haunted Hayride did not disappoint. Throughout the night you will find gruesome heads flying throughout the skies. These disembodied heads were mobile and flying all over the grounds being controlled remotely from a distance. It was fun to watch as groups of friends would be having conversations with each other as one of the floating heads flies in between their faces. The reactions were often hilarious. 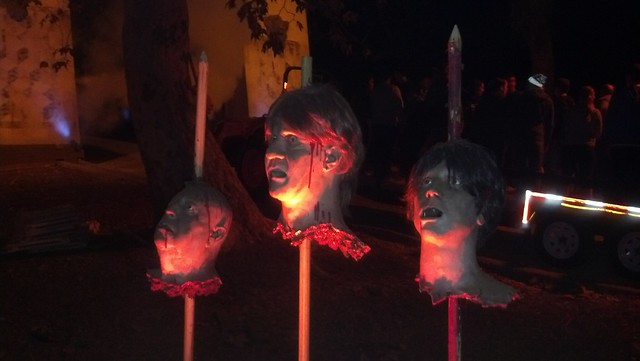 There was also a fun twist on the standard carousel, running backwards with skeleton horses.

Of course the most popular attraction at L.A. Haunted Hayride is the hayride. As you enter the hayride don’t bother trying to sit in the center to protect yourself from scares. All guests are encouraged to sit on either side of the vehicle. The haunted hayride travels through the old L.A. zoo where abandoned cages and displays are still present and are naturally creepy themselves, even in the daytime. There isn’t a through storyline, but instead the hayride brings you from one unrelated scene to the next. One of my favorite scenes this year included giant crows displayed above a cornfield. As the vehicle approaches the cornfield you see giant stakes in the ground, like you would normally see a scarecrow displayed on, but instead high atop these stakes are dark silhouetted figures blending in with the black ink sky. As you get closer the large wings of these human size birds spread wide open. 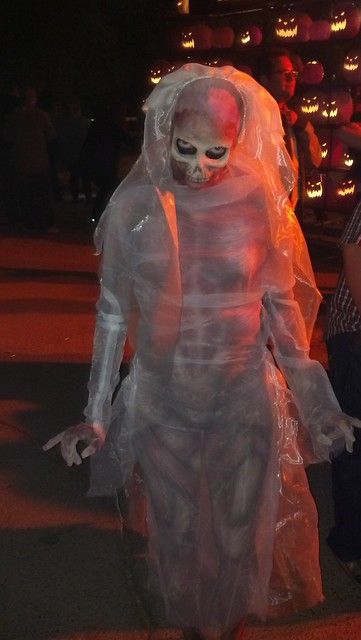 Then comes the part I found absolutely shocking and exhilarating. The once solid stakes in the ground now begin to bend and swing back and forth causing the giant birds look like they’re flying right over your heads. This was an impressive acrobatic feat for the performers that didn’t go unnoticed. In addition, there were other scenes including the demented clowns, child sacrifices, and a hard rock devil-like sequence among others. I had experienced The L.A. Haunted Hayride a couple of years ago and I definitely enjoyed it more this time around.

In addition to the hayride there are several new attractions to check out this year. Seven Sins Sideshow is a unique experience where small groups are let through a tent visiting one room at a time and watching a small scene unfold before their eyes. These scenes are triggered by the actions of the guest. Signs tell you to receipt a poem, kneel before the prayer box, flush the toilet and such. The sometimes funny and sometimes gruesome scenes then begin. There’s also an attraction called House of the Horsemen which is more like a traditional haunted house but once again there are scenes to unfold from one room to the next. 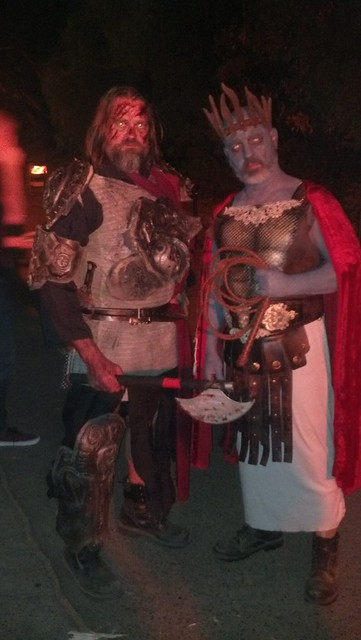 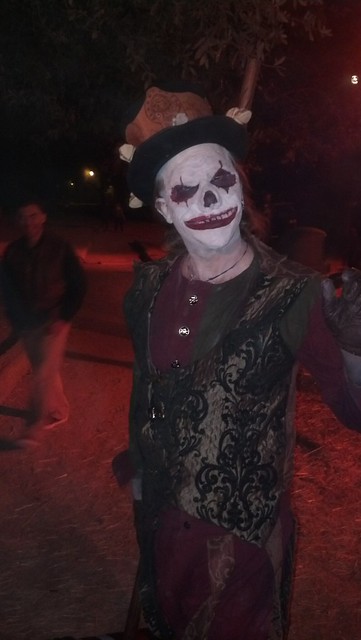 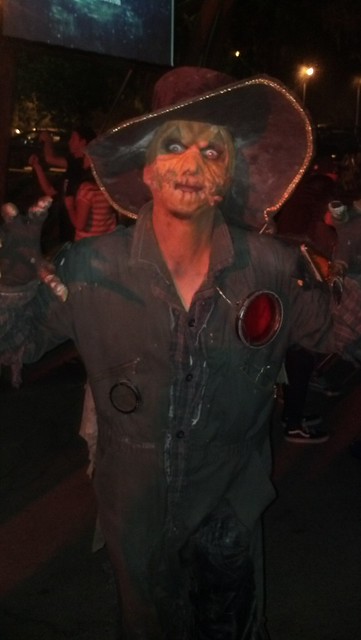 I would probably consider this attraction to be the scariest of the evening. Finally there is In Between Dark Maze and they aren’t kidding when they call this dark or a maze. It is completely black inside aside from the randomly flashing disorienting strobes. One person in your group is given a very dim lantern to find your way through because this is a maze in the truest sense of the word. You will get lost inside. You will get attacked by the mazes monsters. After approximately twenty minutes inside a large group of us thought we had found the way out. Unfortunately an employee pointed out to us that we found the emergency exit and we were then put back inside to find the correct exit. It was not easy. 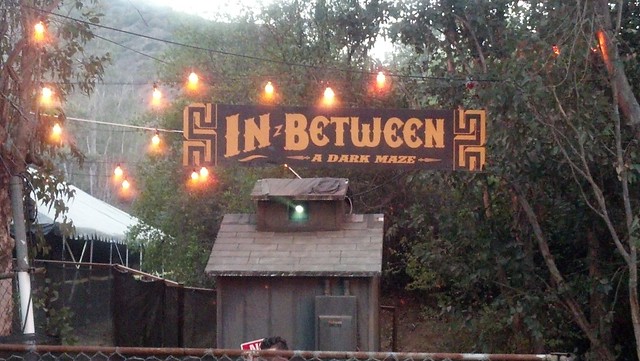 In addition there are sideshows to view, bands to watch and a backwards merry-go-round called the Scary-Go-Round. The L.A. Haunted Hayride is a much fuller night of entertainment than it has been in years past and the producers seem to be spending the money they received from their “Shark Tank” investment in wise places. 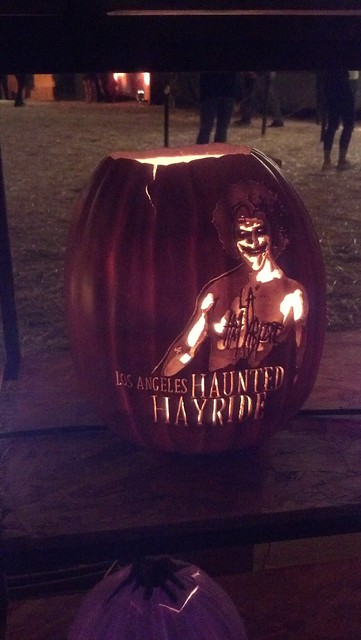 The Los Angeles Haunted Hayride continues through Halloween night. More information can be found at losangeleshauntedhayride.com.

Jeff DePaoli is an entertainer/producer living in the Southern California area. He is co-host of the podcast “Dizney Coast to Coast”. Visit www.DizneyCoastToCoast.com to get your list of “America’s Hidden Mickeys”. Twitter/Instagram