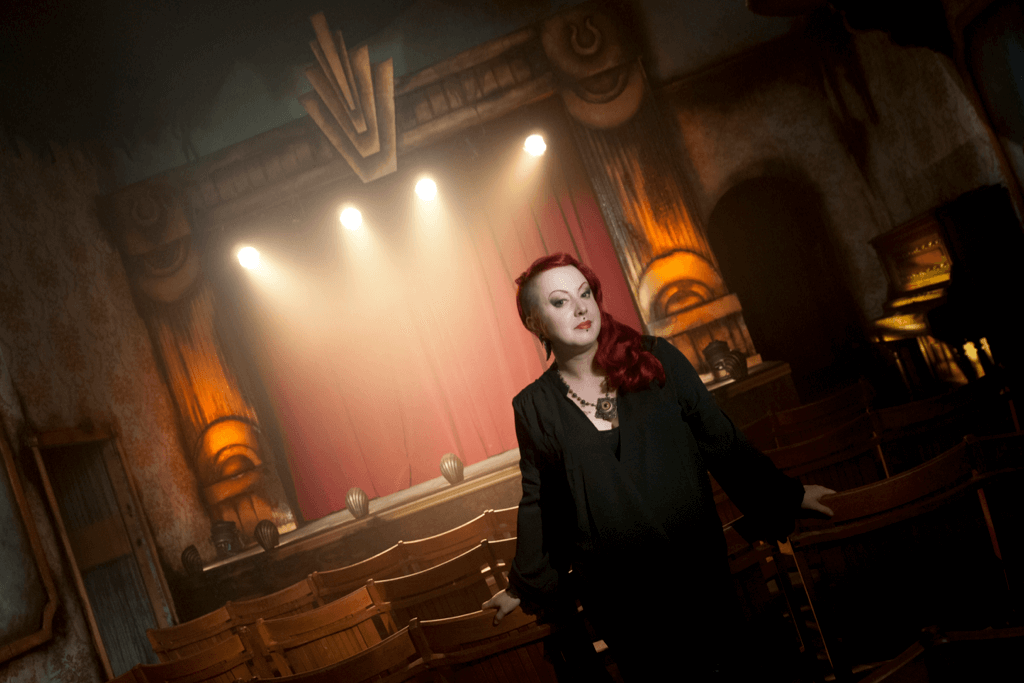 ScareHouse in Pittsburgh, PA is planning plenty of terrifying new attractions for the 2014 Halloween season. In addition to adding Sam from “Trick r Treat” and continuing extreme encounters in The Basement, ScareHouse has an all-new haunted house called The Summoning.

Set in depression era 1932 – October to be exact – The Summoning extends to guests a rare invitation by the exclusive “Order of the Arcana” to visit their lodge during the annual Halloween Party. As the story goes, it’s a secretive society rumored to hold some of the most influential and powerful men of Pittsburgh as members.

According to creative director Scott Simmons, it begins in an “Overlook Hotel/Sleep No More/Eyes Wide Shut vein – everything seems very mysterious and sinister, but also polished and clean.” But things are not always as they seem, taking a turn for the worse rather quickly.

In the exclusive video below, art director Macabre Noir explains the massive scale and extreme attention to detail in which ScareHouse has constructed The Summoning this year.

Video: Inside The Summoning, new at ScareHouse 2014 in Pittsburgh, PA Settings traversed in The Summoning include a seance room, apothocary, secret passage, butcher room, theater, and a backstage area that leads to “the real evil entering our world that night.” Throughout each area, authentic period pieces are featured. The first Halloween party room is filled with Halloween decorations and masks, many of which are authentic, vintage masks ScareHouse purchased from a family owned costume shop that had gone out of business. It all adds a sense of reality to the frightening fantasy world that’s been so carefully crafted.

But in the end, guests aren’t merely there for a Halloween party. They are meant to be sacrificed to “the Great One.”

We’ll continue our extended look at the ScareHouse with more exclusive peeks inside its haunted attractions in the coming weeks.

ScareHouse is now open select nights through November 1. More information, including dates and tickets, can be found at ScareHouse.com.