When has Disney ever described one of their theme park shows as containing content “too intense for young children?” 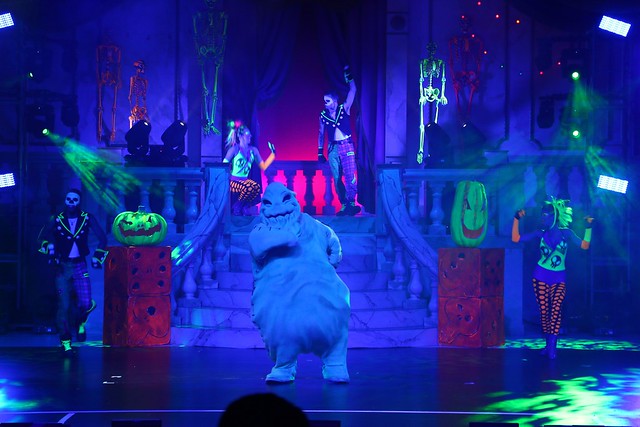 Just what was so outrageous to prompt Disney to add such a disclaimer? Watch the show in its entirety in the video below to see what all the talk was about.

(Note the video above has some music swapped out for royalty-free tracks due to YouTube copyright issues. A complete unedited version is available here, but may not be viewable in all countries or on mobile devices.)

Sitting in the audience during this 30-minute performance, it was clear that the crowd was divided on whether or not it was appropriate to be included at a Disney park. Throughout the presentation, it was easy to overhear a few quiet whispers of disgust. “I can’t believe this is Disney!” said more than one audience member. Reactions online afterward ranged from calling the show “awkward” to “disturbing” to… well, this tweet:

I felt like I needed to shower after Oogie Boogies show. Walt would have thrown up… #VillainsUnleashed

Admittedly, Disney did step way outside the comfort zone for some conservative fans with visuals like these: 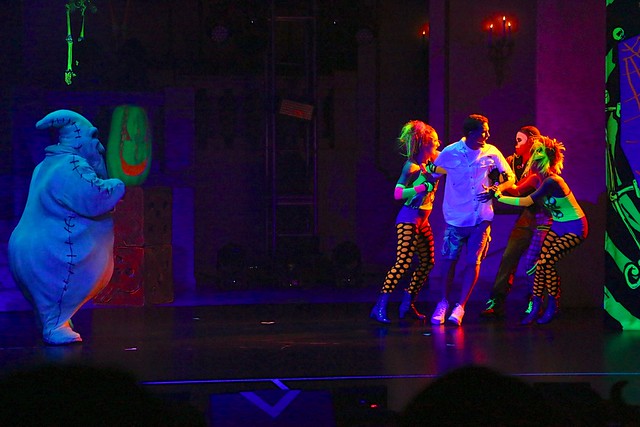 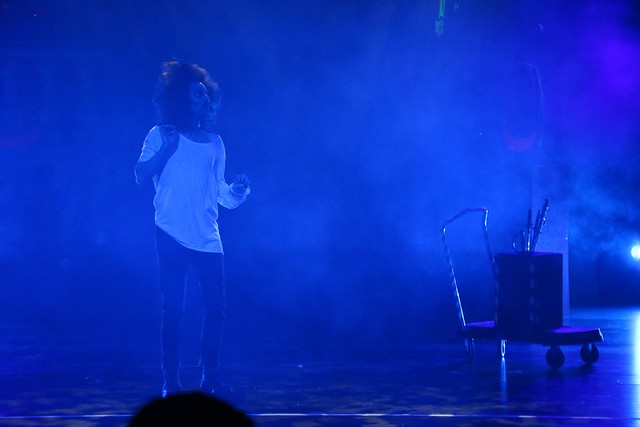 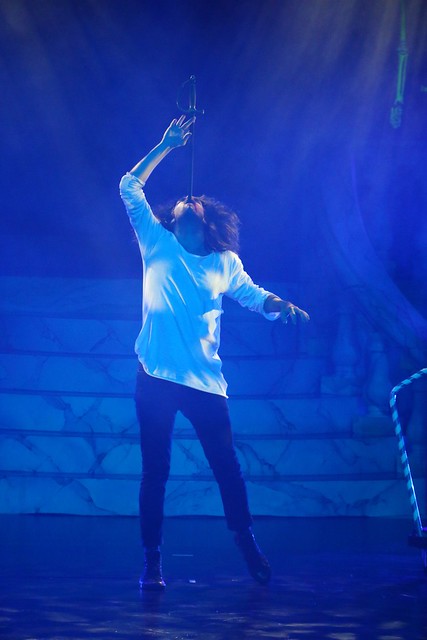 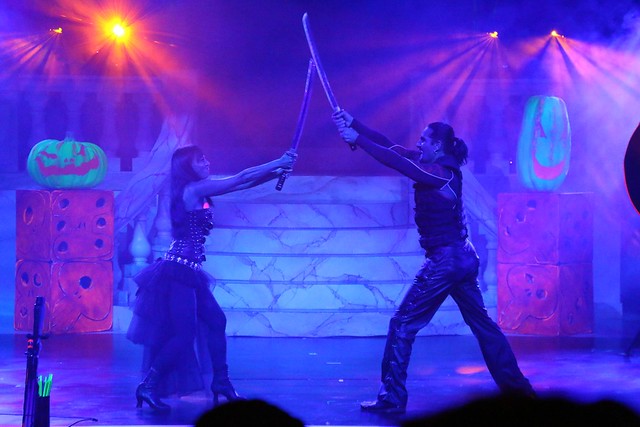 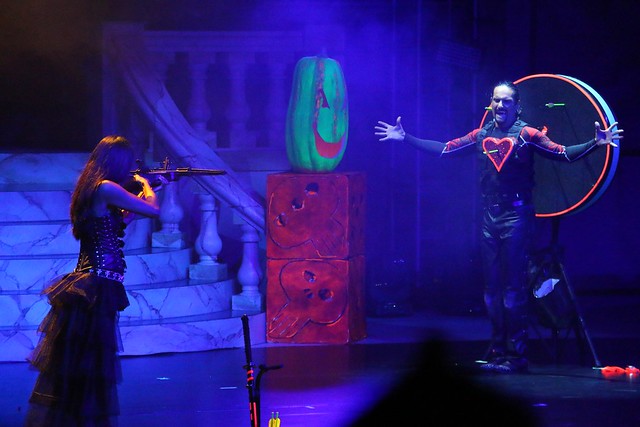 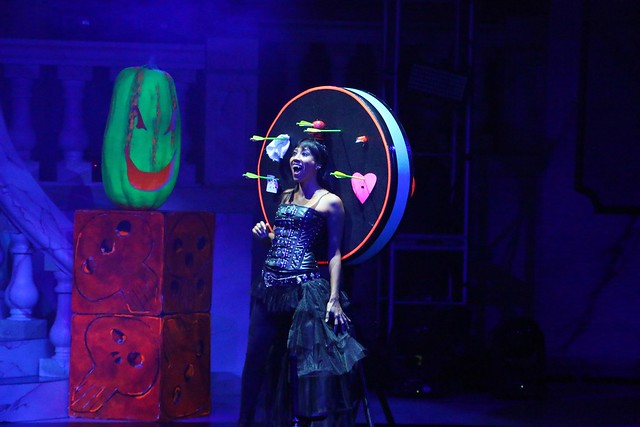 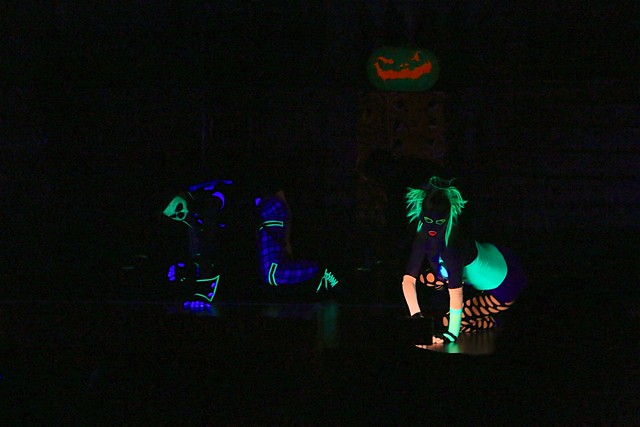 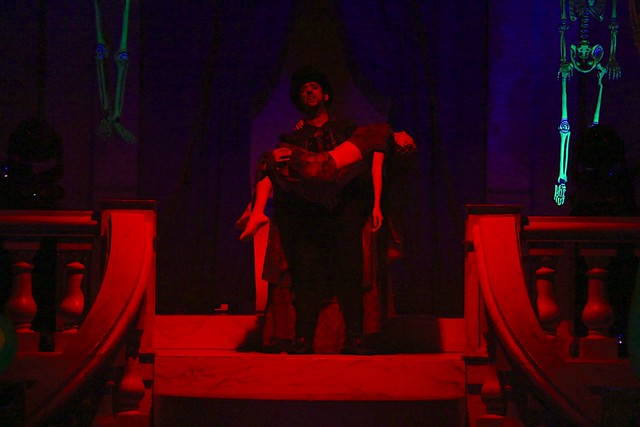 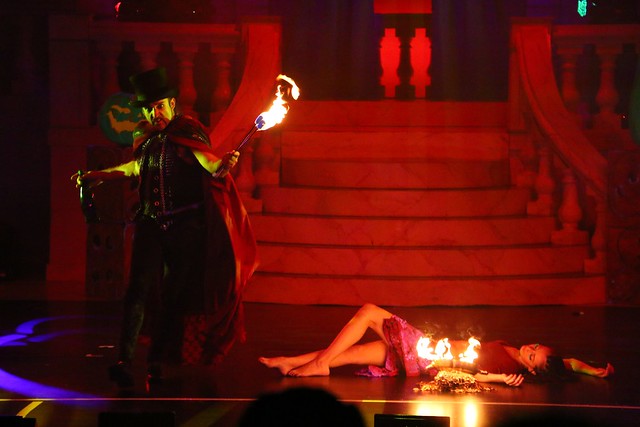 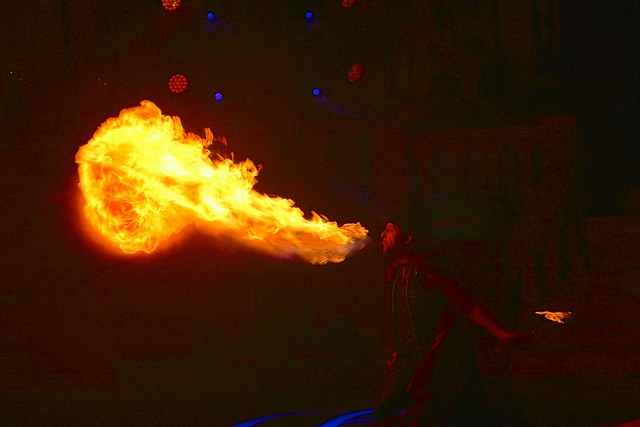 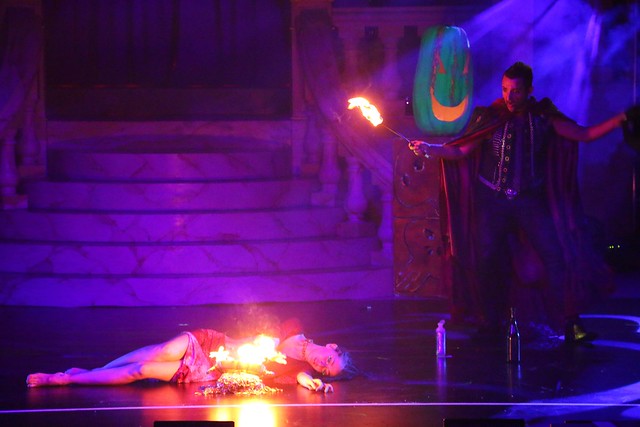 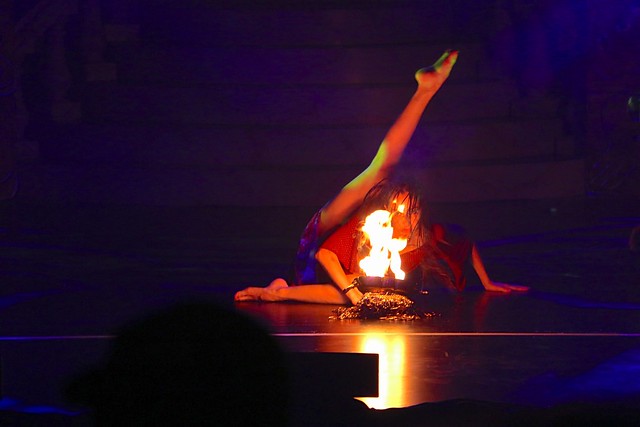 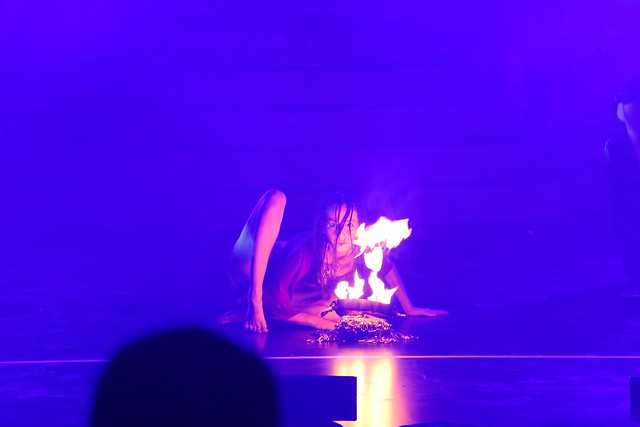 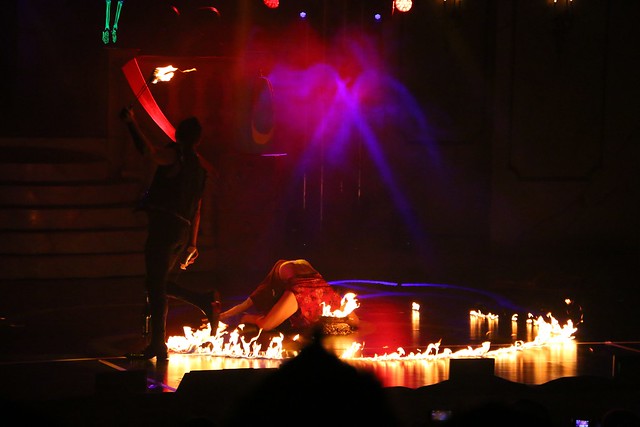 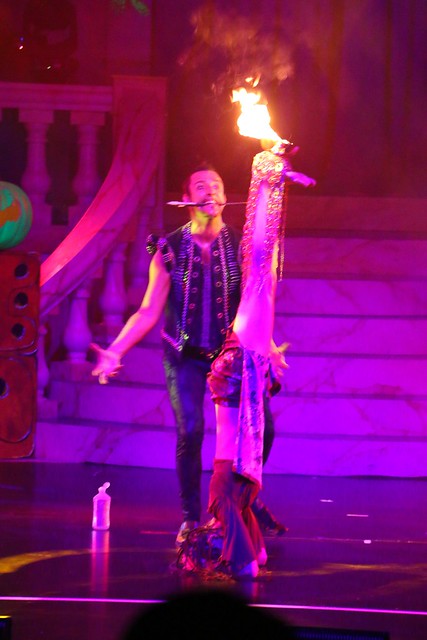 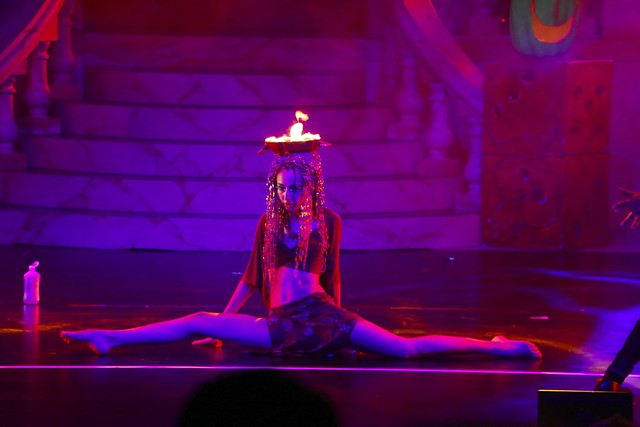 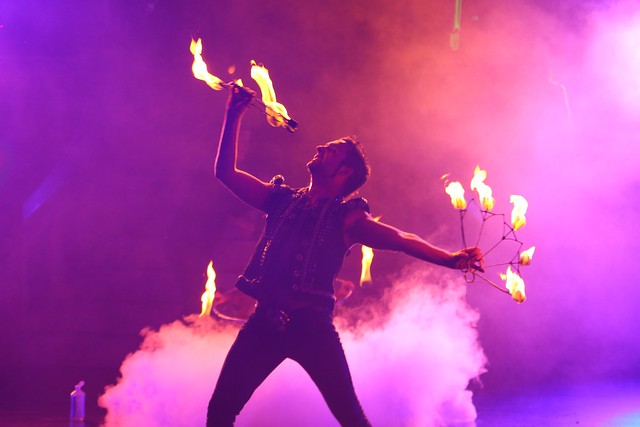 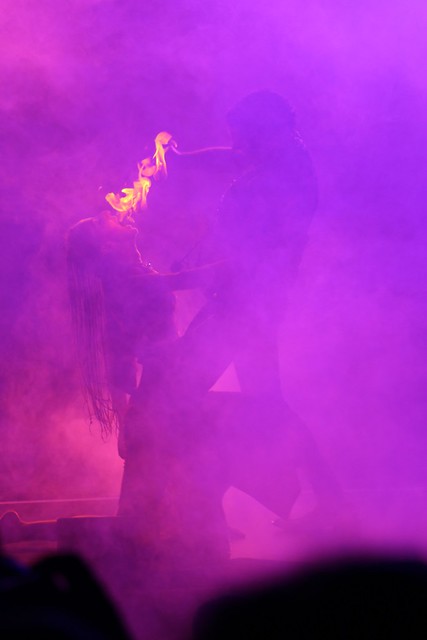 Yes, every one of those photos was taken in a Disney theme park during a Disney event featuring Disney characters. Surprised?

Even the balloon artist that performed before Oogie Boogie’s show began delivered some hilariously adult jokes coupled with some crazy visual moments like these: 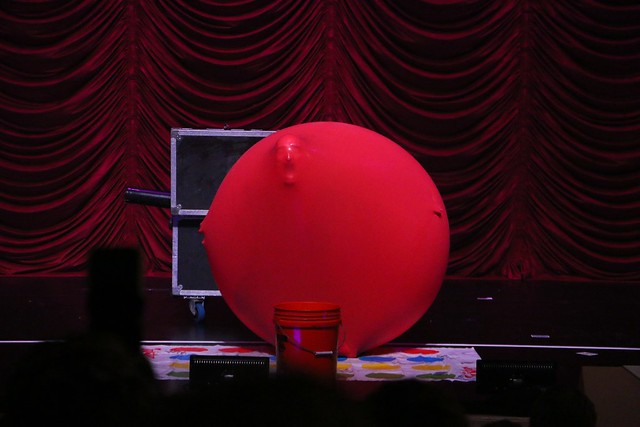 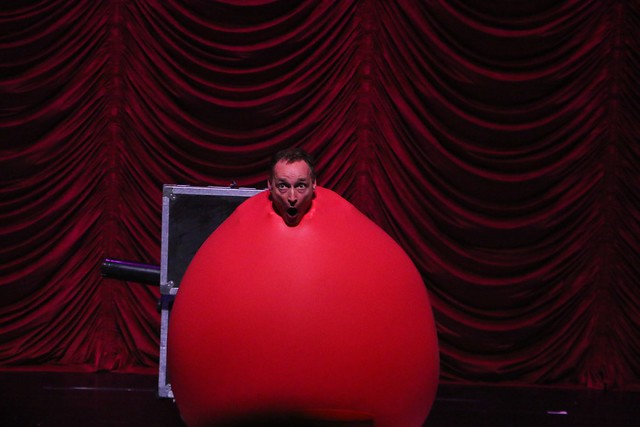 Some Disney bloggers dismissed the show, calling it “one of the most bizarre things I’ve ever seen at Disney” and “more appropriate for Universal,” adding that “it did live up to the name Freaky.”

But that was exactly the point.

For every one shocked fan there were many more who were thrilled to see Disney pushing their boundaries beyond content aimed at preschoolers. In response to one reaction online that noted the show wasn’t appropriate for kids, another fan succinctly replied, “that’s a bad thing?”

Glowing reviews on Twitter seemed to far outweigh the negative:

The Oogie Boogie freak show at #VillainsUnleashed was fantastic. It was the least "Disney" thing they've ever done and it was wonderful.

Others on instagram called the show “pretty rad” and even fangirl-squealed over the sight of Oogie Boogie, exclaiming “HE’S SO CUTE.”

Bringing out the popular villain from “The Nightmare Before Christmas” to sing and dance and display his own freak show just a week before Walt Disney World’s first Halloween party of the year was a brilliant decision for all fans who enjoy that darker side of Disney. “Nightmare” naturally has its own cult following.

And considering this show took place at an after-hours, late night event themed to Disney’s villains that served plenty of alcohol, it was the perfect place for Disney to finally push that envelope and enter the previously forbidden zone of actually presenting some entertainment catering to adult fans. 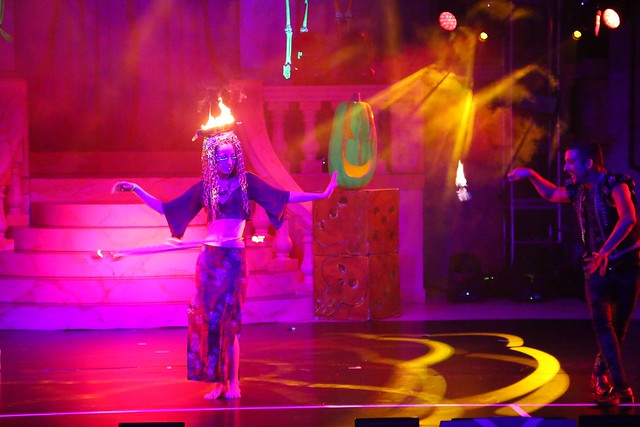 Such fans (myself included) have been calling for Disney to come up with a compliment to Universal Orlando’s Halloween Horror Nights for many years – to create an event at Disney’s Hollywood Studios that showcases the spookier side of the characters today’s adults grew up with. One popular suggestion has been to create an entire event featuring nothing but entertainment based on “The Nightmare Before Christmas.” Oogie Boogie’s Freaky Funhouse Show felt like the beginning of just that.

In an event that was advertised to feature 50 of Disney’s Villains, many attendees left complaining about how long the lines were to meet and take a picture with these characters, sometimes stretching longer than 3 hours. So those who were happy just seeing the characters on stage or from a distance were left with plenty of time during the 5-hour event to take in the rest of the available entertainment. I ended up watching Oogie Boogie’s Freaky Funhouse Show twice because I enjoyed it so much as a welcome change to the usual softening of sinister characters at the Magic Kingdom’s annual “not-so-scary” shindig. 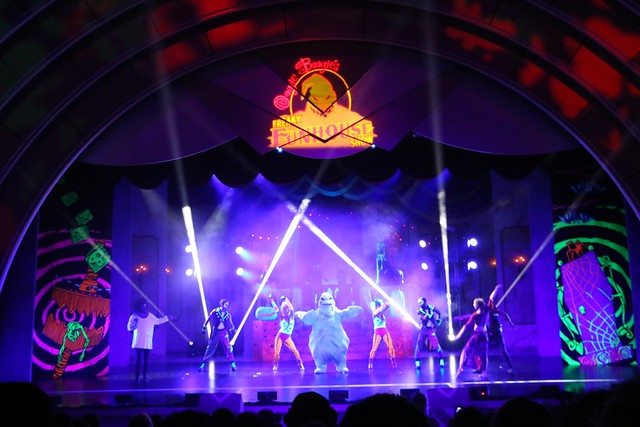 There is no reason why Disney cannot not continue down this path. With proper expectations set, Disney can and should offer entertainment aimed squarely at adults.

Walt Disney World is filled with family friendly entertainment day in and day out. And as Pleasure Island and its fan favorite Adventurers Club are now closed, many adult fans are left wondering what’s in a Disney trip for them. Sure, everyone can be a kid at heart and enjoy meeting princesses and seeing Mickey Mouse, but does absolutely everything at Disney have to be aimed at 3 year olds? Absolutely not.

With all the many complaints that Disney has received about Villains Unleashed, Oogie Boogie’s Freaky Funhouse Show stood out as a highlight of the evening, offering older fans some unique entertainment decidedly different than the typical pixie dust sprinkled across everything else on Disney property.

Fans have been and continue to call for more of this type of offering:

It’s common in today’s society for people who are upset to complain, expecting compensation. Many attendees leaving Villains Unleashed stopped by Guest Relations to receive refunds after spending most of the night waiting in excessively long character lines.

But it’s not nearly as common for praise to be sent for a job well done – and it should be. If you enjoyed Oogie Boogie’s Freaky Funhouse Show, send an e-mail to wdw.guest.communications@disneyworld.com and let them know that adults want to see more of this type of entertainment in the future at Walt Disney World. Then perhaps an even bigger and badder Villains event will find its way into the parks for even more demented Disney fun.