A staple of themed entertainment in New York for many years, the Jekyll & Hyde Club provides a bit of a Halloween experience year-round.

Its original location closed in 2012, but another popped up in Times Square in 2013, now open as the flagship restaurant and bar. But this isn’t just any eatery, dimly lit and filled with freakish fun around every corner.

The Jekyll & Hyde Club could be lifted as is and fit in perfectly at, say, Universal CityWalk. In fact, for a while there were rumors that one would open at Universal Orlando. The comparisons fans make to some of the most popular theme parks in the world say a lot about the quality of the entertainment presented at Jekyll & Hyde.

After years of hearing about this experience, I finally had a chance to step foot inside while in New York covering Toy Fair a few months ago. I wasn’t disappointed. 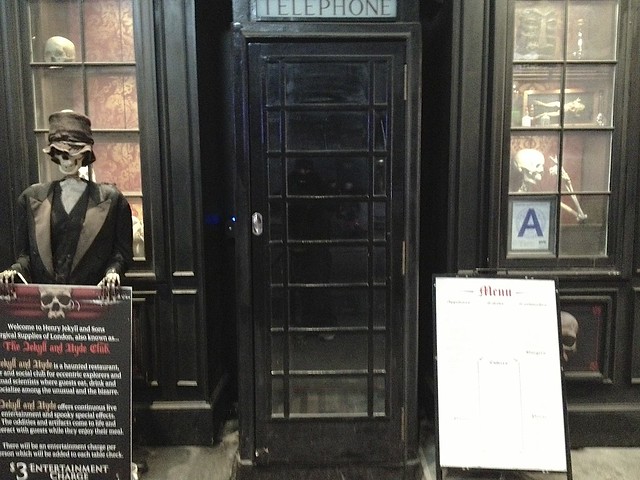 Its entrance is disguised as a phone booth which, sadly, was not operational when I visited. I ended up entering through the gift shop, intended as the exit. But when the phone booth is working, patrons are expected to supply a password and take an oath before entering.

Once inside, the familiarity of being engaged in a highly themed environment set in instantly. I felt like I’d been magically transported away from the LED-lit sensory overload of Times Square into a rather subdued club that was much more my speed. But there is nothing subdued about Jekyll & Hyde, as exciting moments occur regularly from surprising places. 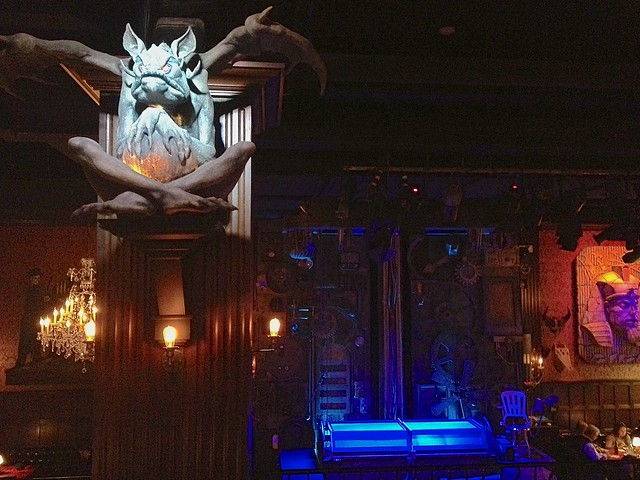 Anything eye-catching inevitably moves, talks, scares, or a combination of all three. Jekyll & Hyde is not a haunted attraction where creatures jump out of dark places, but it does evoke some of those same feelings while remaining rather lighthearted.

I quickly found myself lounging by the bar as other tourists interacted with a talking skeleton who was cracking jokes at anyone within eyesight. Jekyll & Hyde is indeed a tourist trap, but it’s the best kind. 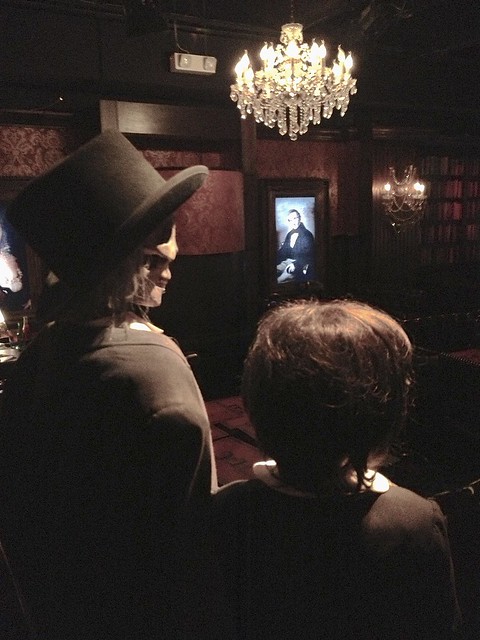 Despite the fact that I’d never been there, there was much familiarity to be found throughout Jekyll & Hyde. Portraits changed and moved their eyes, much like in Disney’s Haunted Mansion. 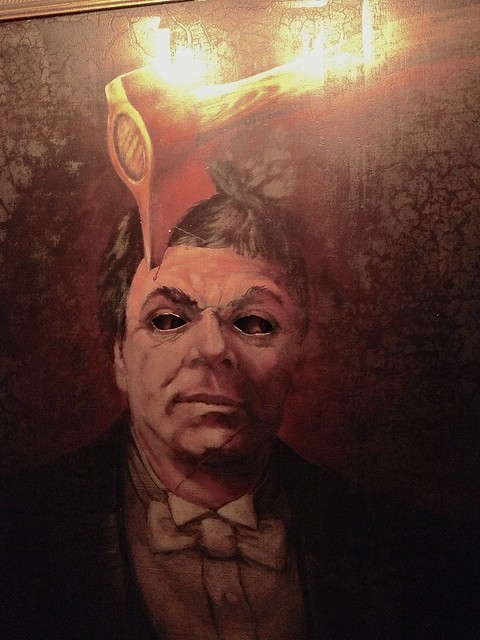 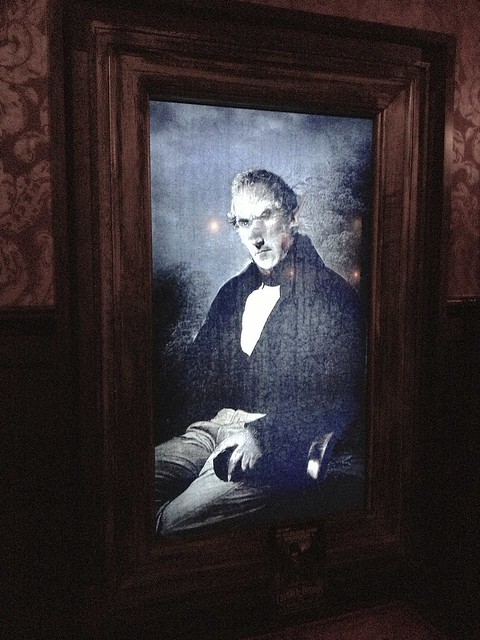 A large statue near the front of the venue as well as a room full of talking tribal masks were quite reminiscent of those famously seen in Disney’s old Adventurers Club. 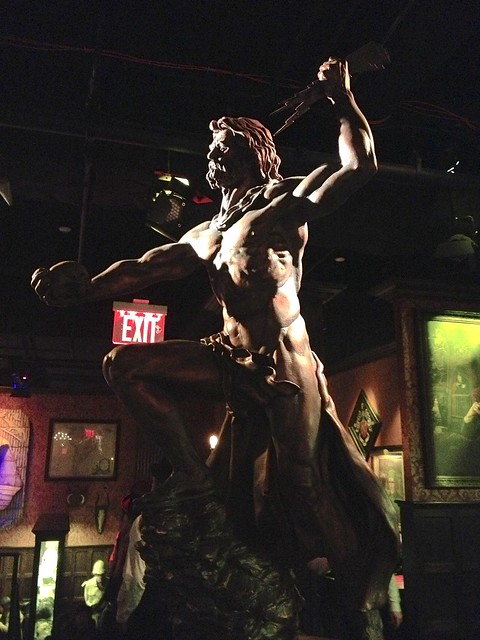 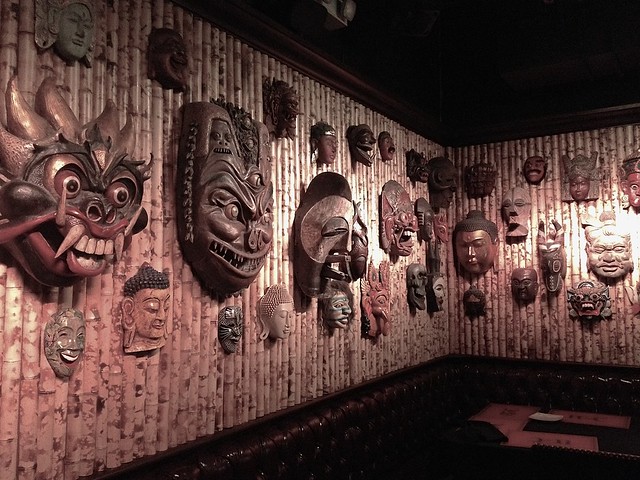 But it’s the oddities and quirks of Jekyll & Hyde that most intrigued me. Animatronics of a two-headed girl and mermaid were certainly attention grabbers, all set alongside dining tables on the second floor. 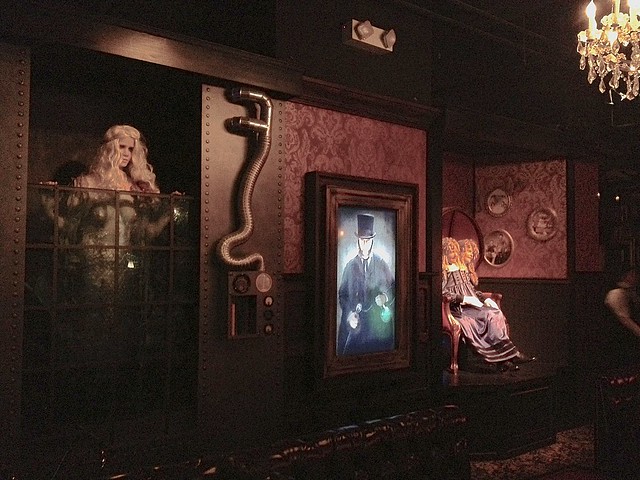 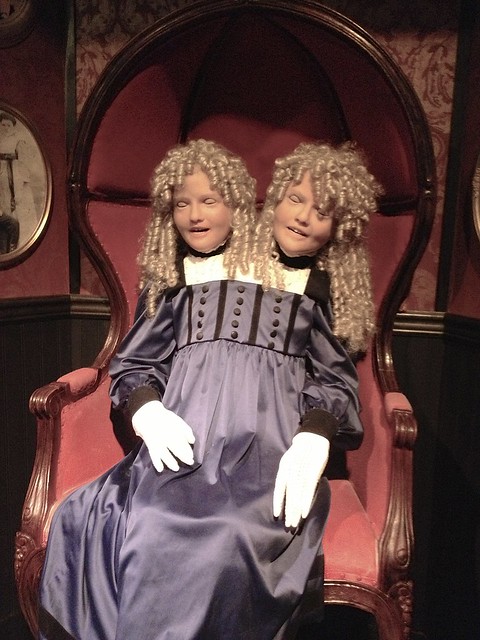 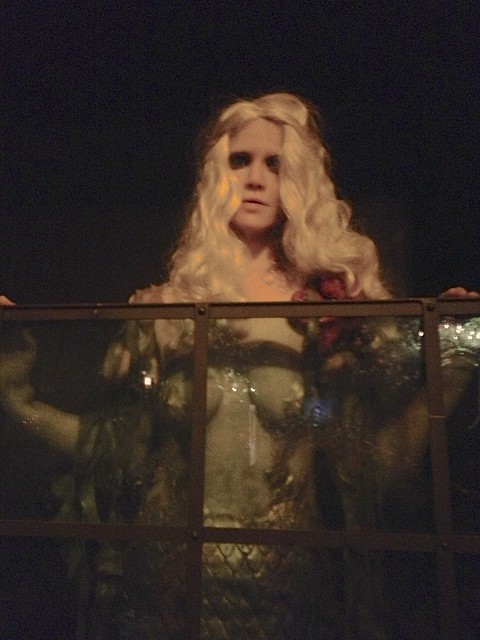 These and many other animatronic figures would spontaneously come to life every so often, go through a routine of noises and movements, and then reset back to being still. It’s like an enjoyable version of the Rainforest Cafe.

Also worth noting is that the half-naked mermaid pictured above is one of the reasons Outside the Magic exists today. After posting a photo of it on the Inside the Magic Facebook page, I received numerous negative replies about how “inappropriate” the image was, simply because of her just-barely-exposed breasts. So here we are.

The most shocking experience for me at Jekyll & Hyde was my hunt for the restroom, located behind a hidden door in the fireplace. After discovering that fact, I passed into a dark hallway of books. 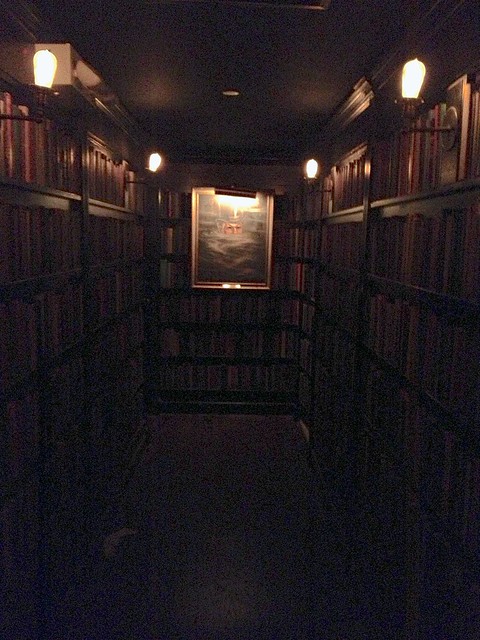 Hidden behind two panels in these books are the men’s and women’s rooms. I entered one, used the facilities, and upon exiting the stall found myself face-to-face with a woman who was just as surprised to see me. She quickly exited and I stood there confused. As it turns out, this happens regularly at Jekyll & Hyde as the men’s and women’s rooms are not marked, primed for exactly this type of unexpected encounter.

But that wasn’t the only unexpected event in the restroom. After the woman left, I was the only person in the restroom. Without any reason to rush out the door, I washed my hands only to find myself staring into the face of an old woman in the mirror. Naturally, I took a picture. 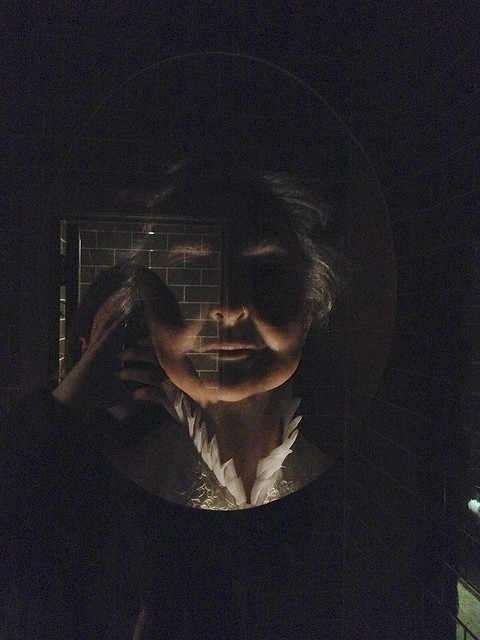 I ended up spending at least an hour wandering through the depths of the Jekyll & Hyde Club, wanting to see as much of its uniquely themed entertainment as I could cram into an evening. I was disappointed to find that I was there on an evening when its downstairs haunted house, the Chamber of Horrors, was not operational. This is a recently-opened area that does include traditional haunted attraction elements and plenty of scary things, so I’m told. At least now I have a good reason to return. 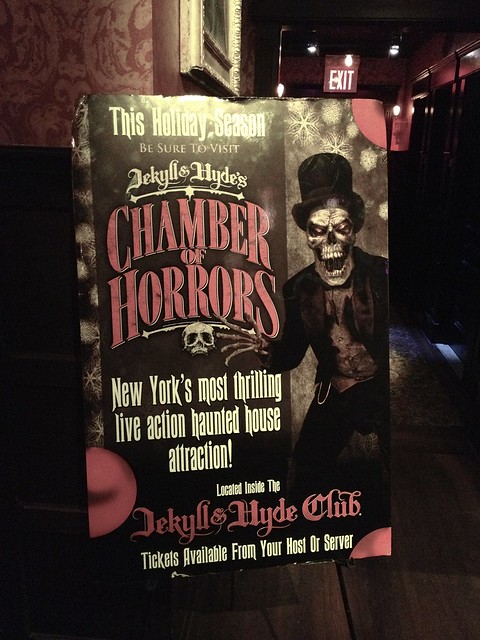 But what I did find in the front of the club was the grand finale show of the evening, a Dr. Frankenstein moment of sorts in which a surprisingly elaborate stage show took place. It’s a fantastic little show considering I’d paid absolutely nothing to see it. 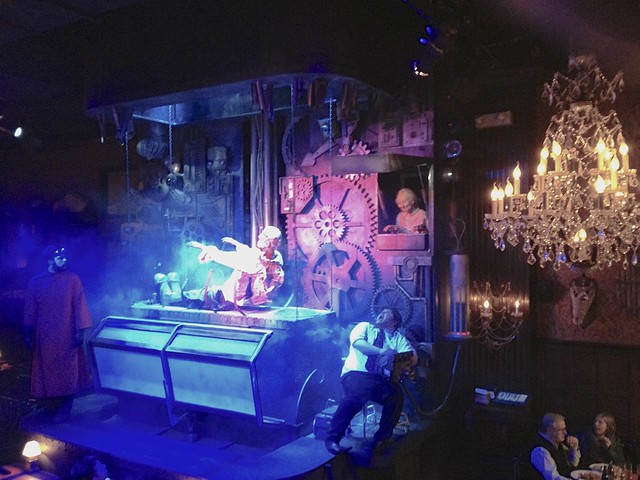 As it turned out, I never did order any food or a single drink all night. I spent well over an hour in the Jekyll & Hyde Club and didn’t spend a dime, though I did leave thoroughly entertained. I’m amazed this place can stay in business letting people enjoy all the show elements without actually paying for any of it. Not once was I ever asked if I wanted something to eat or drink, though their in-house character actors did occasionally chat with me. They were the least enjoyable of the entertainment.

The Jekyll & Hyde Club Times Square is absolutely worth a visit for anyone who’s a fan of Halloween, haunted houses, horror, or themed entertainment in general. From what I hear, the food isn’t very good so I’m glad I didn’t bother ordering anything. But as long as it’s in business, I’ll definitely be stopping by whenever I’m in New York and maybe next time I’ll order a drink.