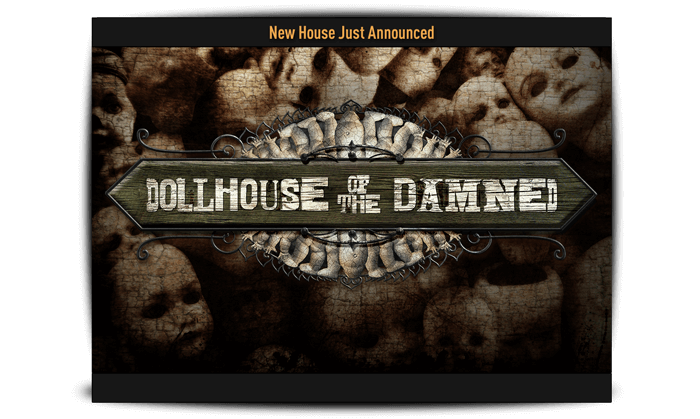 Universal Orlando has announced three more haunted houses for Halloween Horror Nights 2014, all original creations. In addition, Universal has detailed some of the new street experiences / scare zones that will be featured at the event this year.

Dollhouse of the Damned is described as “Within the decaying walls of this house awaits something evil. The unfortunate souls that enter here will become the damned that never escape.” The word to keep in mind here is ‘juxtaposition.’ When you walk into the house, you find yourself in this old-time morgue. But this little girl has set up shop and now it’s her playhouse. She’s torturing people in there. So you’re taking the sweetness of the dollhouse and childhood and combining it with something completely sinister. That theme remains throughout the maze. Another phrase we use is ‘forced integration.’ You’ll see characters with porcelain doll masks that have been smashed into their faces, and now they’re permanent. They’re victims of this twisted amalgamation. It’s really creepy.

Roanoke Cannibal Colony is described as “In the settlement of Roanoke the frenzied colonists will rip, tear and devour any fresh meat that comes near them.” The year was 1587. It was one of the first settlements of the colonial era. The people living here were expecting supplies from Europe, but there was a war going on so they couldn’t make the voyage. Three years later, when the supply ship finally arrived, everyone was gone…except the deranged cannibals who’d managed to survive by eating their fellow settlers.

As a guest, you’re fighting you’re way through this chaotic gauntlet of flesh-hungry man-eaters. What’s cool about the set is that Karen, our décor guru, has traveled up to Virginia to some of these historic settlements and brought back photos for us to use as visual reference. So, the scenery you’re observing throughout the maze is all pulled straight from theses real-life settlements.

Lastly, Giggles & Gore Inc is described as “Witness the torturous process that turns kidnapped people into evil clowns – just try not be transformed into one yourself.” So, we asked ourselves, where do evil clowns come from? And we discovered evil clowns are not born, they’re made. It’s an actual process. We all know that there are countless unsolved disappearances across the country. Where do these people end up? In the clown factory, being stretched, smashed and eviscerated.

Faces are peeled off and voice boxes are torn out. Victims are dropped into a wood chipper, and the gunk that comes out is shoved into other people to create these massive, nasty stuffed clowns.

Toward the end, you encounter the most evil of all evil clowns: The Discarded. These are the surviving clowns that have been cast down for being too dangerous to exist, even with other evil clowns.

This nearly finishes the lineup of haunted houses that also includes Dracula Untold, Alien vs Predator, The Walking Dead, and From Dusk Till Dawn. One is left to be announced.

The whole concept is that these people are trapped in an old time period—their skin is falling off, they have stitched their skin back to their faces, but much of it is still peeling off. What I love about the concept is that it is like you’re entering this really surreal dance, but it is very terrifying at the same time.

There is wax holding their skin on, some are sewing their skin back on but they are doing it very poorly, and there are some whose skin is still detached.

It is grand in scale—there are elements above your head while this off-putting yet harsh waltz music plays. Everyone is moving in a really surreal and creepy dance. There is beauty along with the disgust.

Our high priestess is crazy-evil and in a trance, doing numerous spells and sacrifices to get the ultimate power in her. Because she has made these sacrifices, many other voodoo practitioners in the area have come and they are squatting outside of her shack. They feel if they make sacrifices to her, they will get some of that power when she makes the ultimate sacrifice.

You’re going to see her sacrifice someone right in front of you…you will see every gory detail of this ultimate sacrifice. But that’s not the end—once you get past the sacrifice and the high priestess’ shack, you enter into the area inhabited by the voodoo squatters…and they are all looking for something or someone to sacrifice.