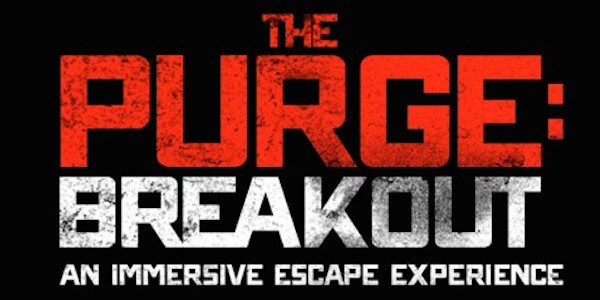 Last year, the anarchic world of “The Purge” was brought to life in The Purge: Fear the Night, a Halloween time experience that sent guests through a winding, high-energy evening of fun.

Now Blumhouse is bringing the concept on the road with a new experience dubbed The Purge: Breakout. It’s the latest in a long line of real-life escape games, putting guests in a confined space with the goal of finding their way out within a time limit. But this one is different, adding horror elements to the mix. It’s described as “being dropped into a real life video game” as groups of six people or less work together to solve clues, puzzles, mysteries, and take on both physical and mental challenges.

Though it will be scary, it’s not quite a haunted house. The terrors of “The Purge” will be present, as time ticks away toward the beginning of Purge Night – 12 hours when all crime is legal. Thirty minutes is all guests have to survive.

“The Purge” was also featured in a Halloween Horror Nights scare zone last year at Universal Studios Hollywood and a second movie, “The Purge: Anarchy” will hit theaters on June 7.

The touring experience will be contained in four semi-trucks, visiting Atlanta, Miami, New York, Philadelphia, Dallas, and Los Angeles between May 29 and July 20, 2014. Participants must be 18 years old or accompanied by an adult.

More information can be found at ThePurgeBreakout.com.

Comments Off on The Purge: Breakout to bring immersive horror escape game to cities across the US