There’s a unique breed of people in this world, those who dream to make others scream. While scaring strangers in darkened halls is generally frowned upon in modern society, the themed entertainment industry long ago invented a place where such nightmares come true: the haunted house.

Haunted attractions offer a release both for the guests who get scared and for the workers who do the scaring. While many people have experienced at least one haunted maze in their lives, far fewer have been on the other side of those creepy corridors. But those who have swear it’s the best kind of work around, even if entirely exhausting.

I recently jumped at the opportunity to lurk in the shadows of Legends – A Haunting at Old Town for an evening. Though I’ve spent some time being sinister in the scare zones of Universal Orlando’s Halloween Horror Nights, I’d never actually worked inside a haunted attraction before. But for four hours one Saturday night, I became a “twitchling” at Ashdown and Sons Undertakers. 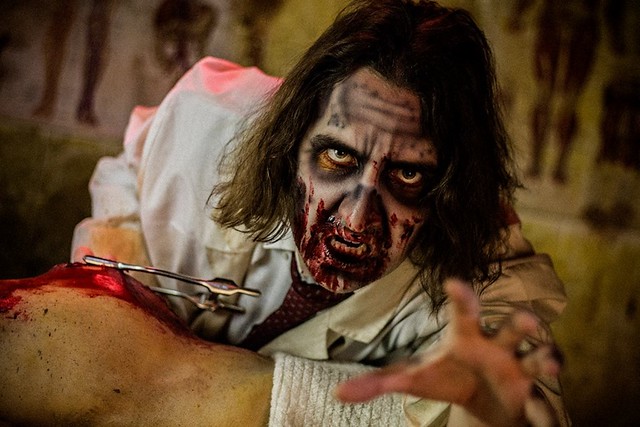 Legends – A Haunting at Old Town is a fairly new haunted attraction in Kissimmee, Fla., located around 10-15 minutes from Walt Disney world. Unlike Halloween time theme park events, Legends is open year-round. It replaced the former Haunted Grimm House in the same location, reusing its spooky old facade. But inside there is no comparison, completely gutted and transformed into an all-new (and far superior) experience.

The video below gives an overview of what to expect out of this intimate haunted attraction.

They call their spooks “twitchlings” and to become one for an evening required a bit of a makeunder. I supplied my own undertaker apparel – an old shirt, tie, and pants – allowing their talented artists to handle the rest, distressing my attire and making me look like I’d just crawled out of their crypt. 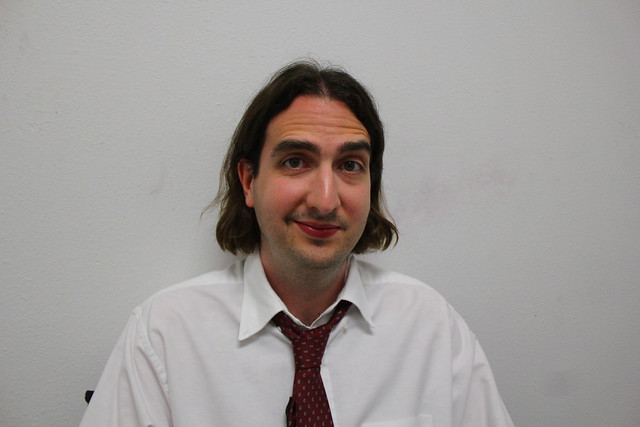 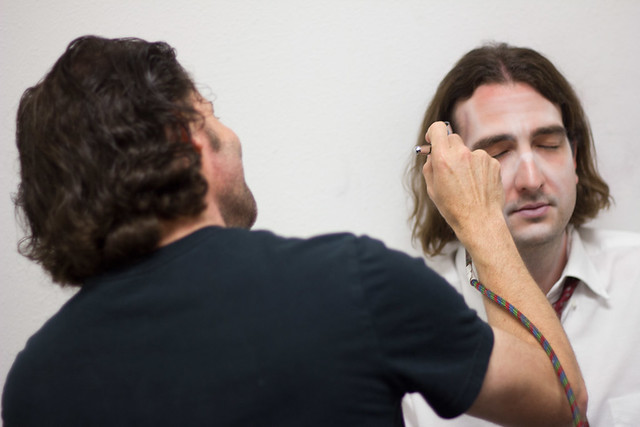 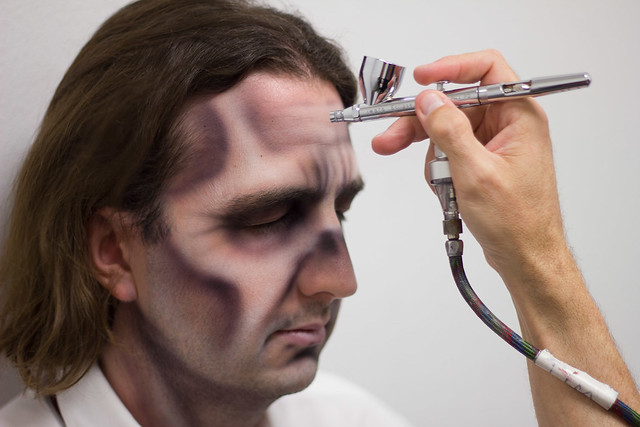 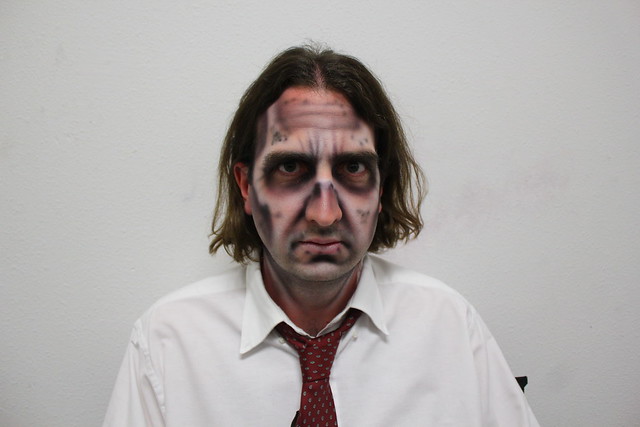 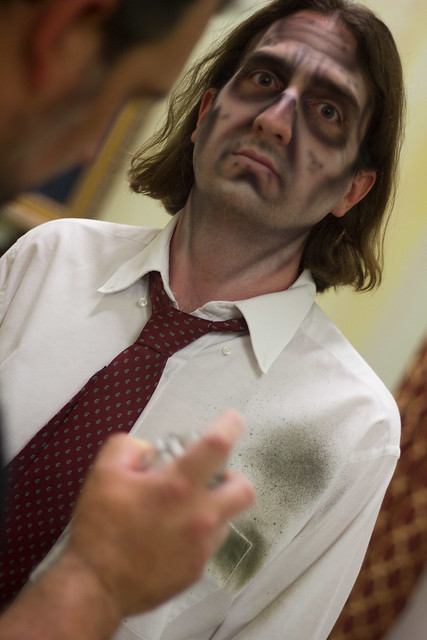 My makeup artist was a former Universal Orlando employee who previously worked on Halloween Horror Nights, Grinchmas, and Beetlejuice. He was quick with an airbrush to transform me from ordinary human to horrific haunter.

I wasn’t the only one undergoing this transformation. The special evening was a birthday celebration for Erik Yates from Behind the Thrills, joined also by BTT’s Rachel Yates and Scott Yuken as well as Robert Bearden from Mickey Updates. Together we took over many of the haunt’s leading roles. 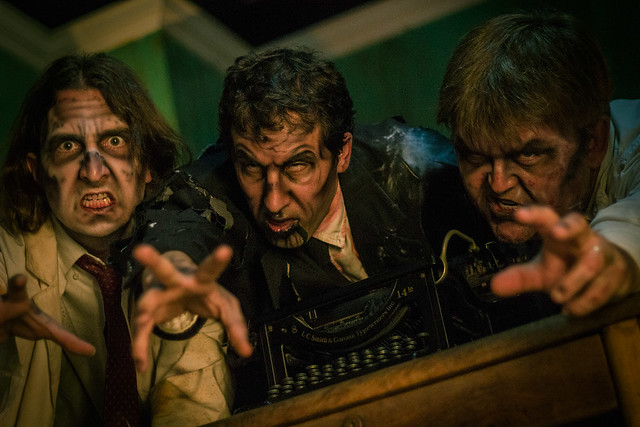 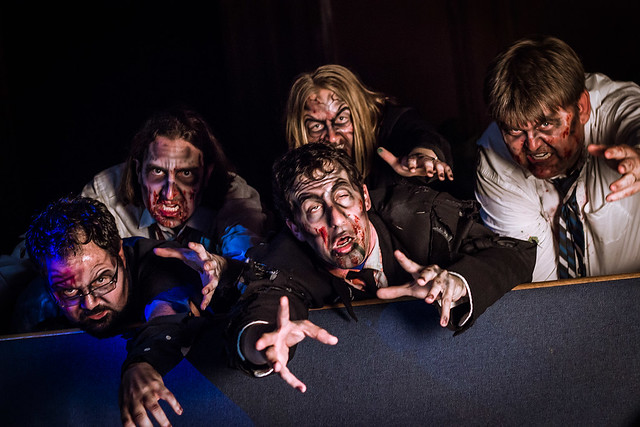 For half the night, I donned a lab coat and became an embalmer, one of the first creepy characters guests visiting Legends encounter. After turning a corner, visitors came face-to-face with my vicious visage, separated only by a decapitated body I was in the midst of operating on.

In this “spotlight” role, I was meant to be trapped somewhere between my former life and a freshly undead state. As visitors approached, I suddenly realized my job was no longer meaningful, replaced by the desire to taste human flesh. So my attention quickly shifted from the cadaver in front of me to the approaching guests, making quite a hissing and snarling commotion as they approached. 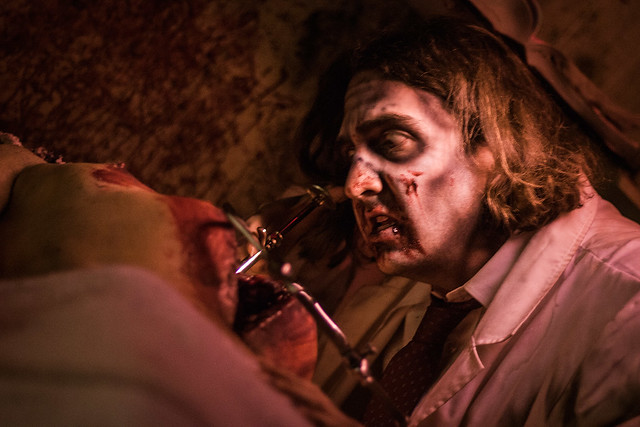 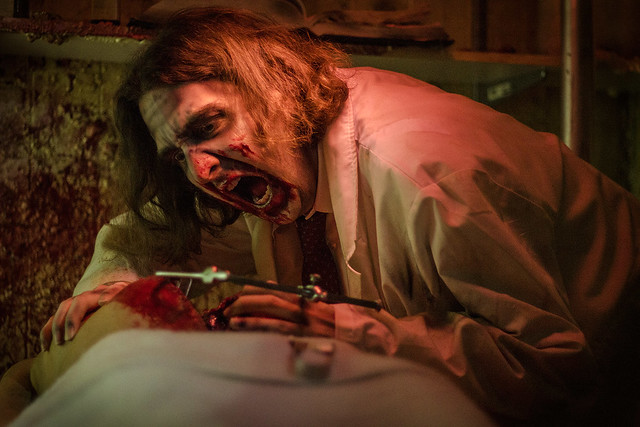 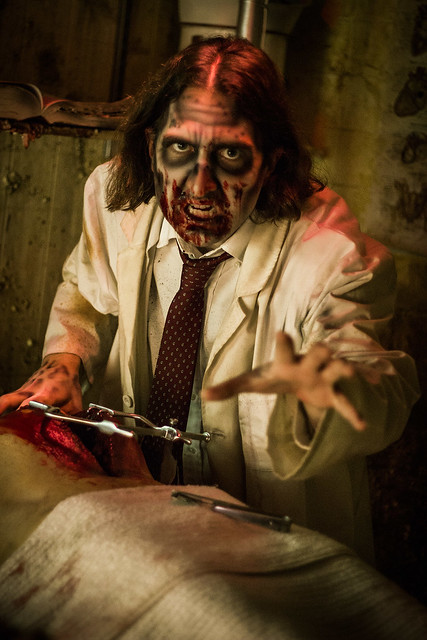 To continue onward, Legends guests had to pass within inches of me as I lunged and swatted at them. Some froze in terror while others laughed it off. No two patrons react alike in a haunted attraction.

Throughout the evening, I moved between this post, a hallway filled with surprise pop-open panels, and an elaborate chapel finale. Between them all, I learned just how hard the haunters at Legends work.

Co-owner, manager, actor, and Archibald Ashdown himself Dan Carro guided us newbies through the night, offering his veteran advice for scaring the wits out of their customers. By sending groups of no more than six people at a time through the experience, they are able to focus in on every single person who passes through. If they don’t scare someone the first pass, they make note and circle back around to get them by the end. Even the “tough guys” are targeted and wind up frightened by the end of a trip through A Haunting at Old Town.

So that was my goal – to make sure no one left unafraid. My proudest moments came as I made a grown man scream like a little girl inches from my ghoulish face, when I sent a woman tumbling backwards in terror as I growled at her, and when I cornered many a guest in the chapel by rapidly spinning around and leaping up onto a pew, stopping them in pure fear. “Don’t! Leave me alone!” one British girl exclaimed at me as she pushed her even more frightened friend along in front of her as a shield.

As nearly 150 guests poured through that night, no more than 6 at a time, I aimed to scare every single one. Together with the other writers and Legends regulars, I believe we put on quite a night of entertainment.

It wasn’t without peril. The next day, us amateurs found ourselves sore in muscles we didn’t know existed. Somehow during the evening I had cut a finger, scraped an arm, bruised both knees, and twisted a toe. But the adrenaline of the evening left me feeling none of these ailments at the time, high on the excitement of sending people literally screaming and running away. Soreness aside, it’s the most instantly fulfilling job I can imagine.

The folks at Legends – A Haunting at Old Town get to do this all year long. As Carro put it on a brief break between groups, the worst day working there is better than the best day at most jobs. And I agree. It’s extremely exhausting work, but beyond fun. It requires constant attention to the customers, putting on a show for each individual that passes through. The immediate gratification received from watching guests cower is unlike any other position on this planet.

Most of all, it was a fantastic birthday celebration, capped off with cupcakes and a bit of fun as Erik climbed into a coffin. 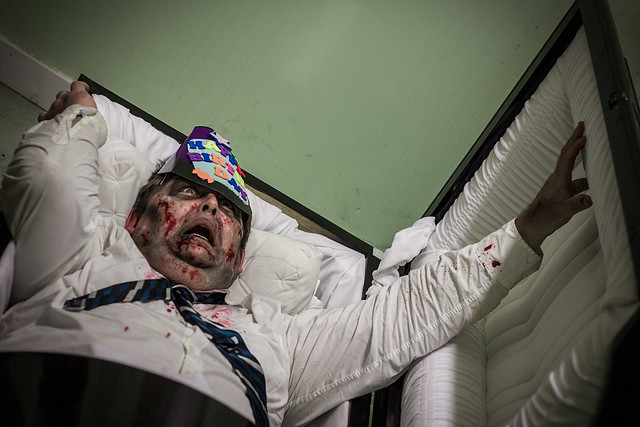 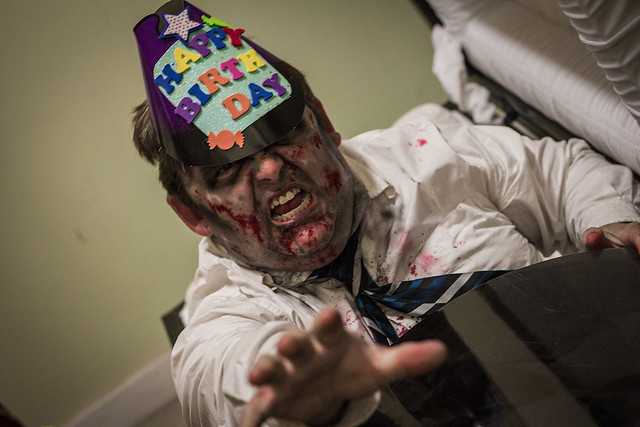 The twitchlings that scare at Legends nightly are far more skilled than our little group and definitely deserve a visit. Don’t miss Legends – A Haunting at Old Town next time you’re anywhere in the Orlando area. Find out more information at LegendsOldTown.com.

And thanks to those who came out to see me. It definitely won’t be the last time, as I will gladly take them up on their invitation to use their haunt as a form of stress relief, a unique opportunity to terrify tourists all in the name of fun.

More photos from my night working at Legends – A Haunting at Old Town:

Comments Off on Ghoul School: Scaring is hard work at Legends – A Haunting at Old Town but worth every scream