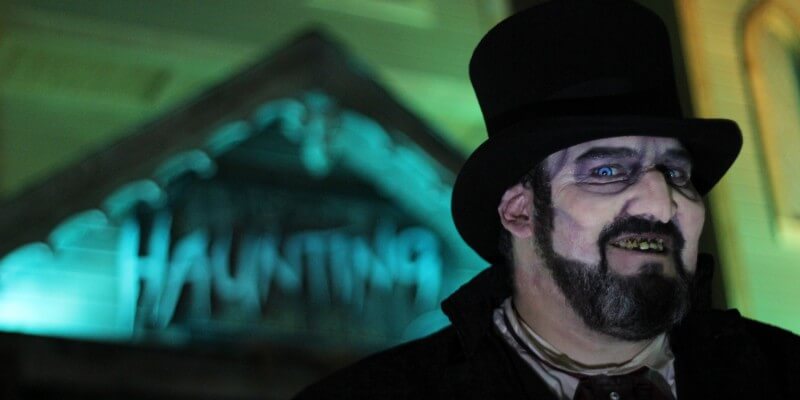 After three years, the gothic grim façade at Old Town is once again dark.  The macabre manor has been part of the ‘life-blood’ at Old Town in Kissimmee, Florida since the mid-1980s, as the Haunted Grimm House. Dated and rundown, the attraction closed in 2012. Legends Dark Amusements acquired the attraction and gave it a breath of un-life, re-opening the renovated and expanded experience as Legends, A Haunting At Old Town.  The old mansion was converted into a FUNeral parlor for Archibald Ashdown and Sons to conduct their family “business”.  Soon the halls were filled with undead twitchlings and were once even overrun by werewolves.

An after dark ghost tour and “Stuff of Legends” gift shop added to the attraction’s appeal.  Characters like Papa Chops and various Ashdown relatives roamed the sidewalks and faux cemetery in front of the two-story spook house. Sadly, after three years of fears and fun, Legends announced the closing of the Old Town Haunt on their Facebook page on February 17, 2016:

Coinciding with the end of our lease, Legends Dark Amusements has closed operation of the haunted attraction, located at Old Town in Kissimmee, Fl. We had an agreement to sell the attraction in place, so it could continue operations in the Old Town location, but the perspective new ownership was ultimately unable to reach a lease agreement for the space.

Conversations are ongoing with perspective new operators about reopening the show in a new location. Meanwhile, the Legends FaceBook page will remain up to announce any changes in the status of the show.

Along with announcing the closure of the show, the owners of Legends would also like to take the opportunity to say thank you to our management team, cast and crew for keeping the screams echoing through the halls of Legends, since we first opened our doors in October of 2013. Our teams passion and hard work earned much deserved accolades from both our fans and the media during our run. Operating Legends has been an amazing experience that we will always remember. While all legends do have an ending, we eagerly await the rebirth of a Legend should that happen. . .

Comments Off on 2016 claims another legend – Legends, A Haunting At Old Town, closes the crypt