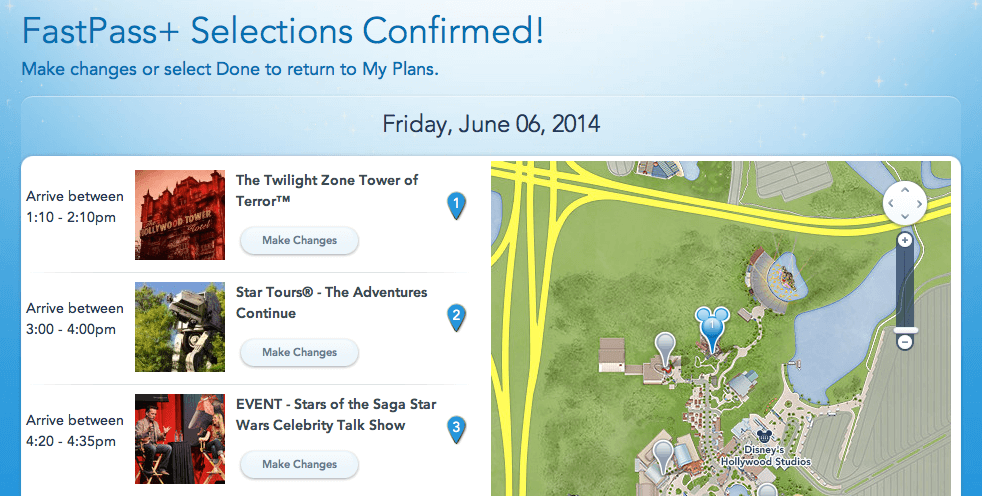 Star Wars Weekends at Walt Disney World will be filled with celebrity appearances, many of which normally require long waits to see. But this year Disney has added FastPass+ booking ability, enabling guests to prebook chances to attend some of the most popular presentations.

FastPass+ bookings are now available via MyDisneyExperience.com for the Behind the Force events featuring “Star Wars Rebels” cast members, James Arnold Taylor’s Obi-wan and Beyond presentations, and – most interesting of all – the Stars of the Saga talk shows, which will spotlight each weekend’s biggest stars.

Update: Mark Hamill will not be appearing in the Stars of the Saga talk show, instead having his own separate presentation called A Conversation with Mark Hamill. FastPass+ availability came and went quickly early in the morning of May 30. Guests without a FastPass+ booking can wait in the standby line to get in.

The biggest of them all will be Mark Hamill, appearing June 6-8 at the event. Other celebrities attending that weekend are Billy Dee Williams (Lando Calrissian) and Ray Park (Darth Maul), who should be joining Hamill in sharing the spotlight during the talk show, hosted by James Arnold Taylor.

FastPass+ selections are also available for the rest of Star Wars Weekends. A full celebrity line-up can be found here.

Right now, Star Wars Weekends FastPass+ selections are only appearing on the MyDisneyExperience.com web site, not in the app. They should show up in the app soon.

Hamill will be participating in the talk show and motorcade, but will not be signing autographs or conducting meet-and-greets.

Annual passholders can only book 30 days out, which currently is June 6, so return to the MyDisneyExperience.com web site in the coming days to book the other two. Guests with Walt Disney World hotel reservations can book 60 days out.