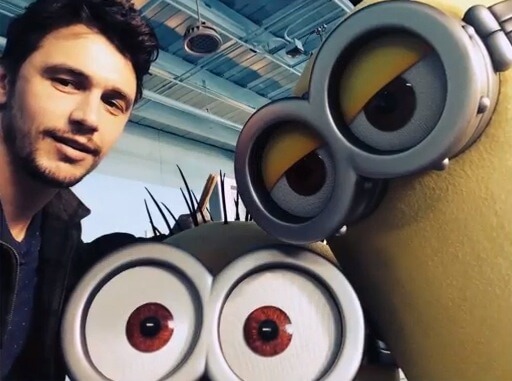 Though Despicable Me Minion Mayhem doesn’t officially open to the public at Universal Studios Hollywood until this Saturday April 12, actor James Franco wanted to make sure he didn’t have to wait in any long lines, so he showed up a few days early to claim his spot amidst construction workers.

He also took a few moments to take a selfie with some Minions: Someone probably should have told him that the new 3D ride has already been open for technical rehearsals for a couple weeks.

The grand opening ceremony for the attraction will take place on Friday, April 11 and Inside the Magic will be there to cover it.

Despicable Me Minion Mayhem has already been entertaining huge crowds at Universal Orlando since it first opened in July 2012, but Hollywood is doing it even bigger.

Helmed by (former?) super-villain Gru, with assistance from the slightly forgetful Dr. Nefario, “Despicable Me Minion Mayhem” will captivate fans when it recruits guests and transforms them into beloved, gibberish-speaking Minions.

Together, “Despicable Me Minion Mayhem” and “Super Silly Fun Land” will represent a distinct, immersive environment within the theme park, reimagined to fully engage guests in the world of Gru and his Minions joining Universal Studios Hollywood’s dynamic roster of award-winning themed attractions.

Walk-about characters, including Gru, Margo, Edith and Agnes, countless mischievous yellow Minions and Kevin, an evil, crazy-haired purple Minion, will also stroll around to interact and pose with guests.