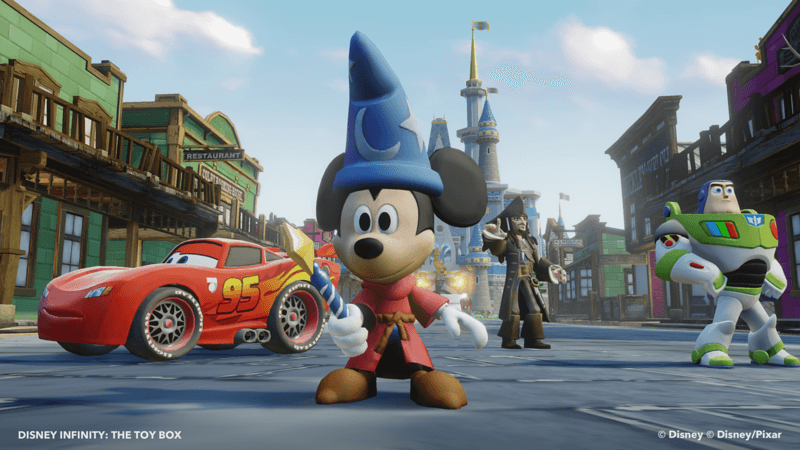 Disney Interactive first announced Sorcerer’s Apprentice Mickey Mouse would be coming to their Disney Infinity video game at the D23 Expo in August 2013 – but not until the following year. Only guests at the Expo received early versions of the figure, many of which immediately landed on eBay selling for upwards of $100. Beginning this weekend, gamers everywhere will finally have a chance to get a hold of this highly sought-after figure as Sorcerer’s Apprentice Mickey Mouse hits store shelves nationwide.

But this version of the figure isn’t exactly the same as the one given out at the D23 Expo. That version had shiny silver shapes on Mickey’s Sorcerer hat, while the retail version has light blue paint applied, leaving the original to still be a collector’s item. Mickey is a fun character to play with in the game’s Toy Box mode. He doesn’t come with his own play set, but waving around his magic wand lets players relive a few “Fantasia” moments. And he comes with “Mickey’s Magical Escape” Toy Box adventure, which is a brief but enjoyable extra area.

Most amusing of all is simply playing as this iconic Disney character alongside more contemporary ones, all while running around the endless insanity that Toy Box mode offers. Just as Mickey is able to conjure up creations in his famous role, gamers can do the same in Disney Infinity – including adding in some enchanted brooms. Sorcerer’s Apprentice Mickey hits store shelves this Sunday, February 9, 2014 for an MSRP of $12.99.