Opening soon at Universal Orlando as part of their ongoing CityWalk expansion is a new Mexican restaurant called Antojitos. The name literally means “little cravings,” often synonymous with Mexican street food. But there’s nothing little about the bold flavors that will be served here.

In an intimate media preview today, I had the opportunity to walk through the almost, but not-quite completed construction site as well as sample several of their most unique dishes. In all, there’s no doubt Antohitos will be a hit for party seekers and casual diners alike.

From the outside, the restaurant’s decor looks like a tie-dyed explosion across an old Mexican church, complete with a working bell overhead (they’re still deciding how often it will chime). 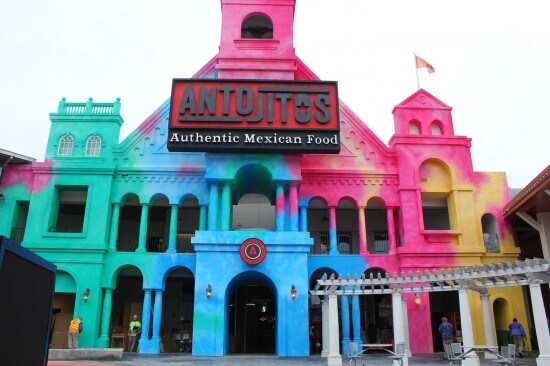 But Modesto Alcala, Vice President Revenue Operations for Universal Studios, says it’s meant to mirror the vibrant colors often found on many streets in Mexico. They want guests outside Antojitos to feel like they are walking through a street filled with food carts – quite literally. A vibrant bus will be permanently parked outside serving up drinks while vendor carts will offer small plates, sometimes in front of the restaurant, other times circulating CityWalk. Ample seating will pull it all together.

Inside, Antojitos is split into what amounts to two separate restaurants. No photography was allowed in today’s preview, as they’re still putting the finishing touches on the decor, but it’s at least 90% complete, revealing a distinctly urban look. Graffiti and large Mexican character murals are scattered throughout textures of wood, brick, and metal. Front and center is a large bar, ready to serve the restaurant’s many signature tequila drinks, expertly chosen by David Grapshi of Gemini Wine and Spirits. (More on that below.) Neon lines artwork on the ceiling while an open kitchen shines with stainless countertops and appliances, soon to be filled with bustling activity as chefs prepare each night’s dinner service. Among the more unique decorations is a row of plastic diapered baby dolls painted to resemble traditional Mexican wrestlers. It all adds to the quirky and fun feeling of the downstairs area.

There’s a “stage” of sorts in the back of the main downstairs dining area, but it won’t be home to a specific band or DJ. Instead, Antojitos may feature a roaming band throughout the restaurant, but those details aren’t entirely ready to be revealed just yet. It’s clear there will be a lively party element, but without being obnoxiously loud.

The upstairs half of the restaurant, designated as Antojitos Up or “the hacienda,” has a much more refined look, losing the street vendor feel in favor of one of being inside someone’s home. A separate hostess station is backed by Day of the Dead-style skulls and a separate menu offers a different take on Mexican cuisine while patrons lounge in cushier comfort. A private dining table can be curtained off for special occasions. And there’s a fantastic covered, but open-air balcony with a great view of CityWalk and plenty of room for seats.

While the environment is nice and welcoming throughout, it’s the food and drinks that will keep CityWalk guests coming back. From appetizers to desserts, Antojitos is serving up Mexican food unlike any other in the area. The classics are there, from burritos to tacos to tamales, but it’s their custom creations that are worth showing off – which is exactly what Universal did today.

(Here’s where I wish I could have taken some pictures earlier, as the food was beautifully presented.)

The first appetizer I tried today was Esquites Asado – roasted corn with jalapeno mayo, queso fresco, ancho chile, and fresh tortilla chips. Warm, creamy, and a bit smokey, this delicious dish is served in a small metal bowl alongside a hefty helping of light, but crispy chips. It’s deceivingly large and quite filling.

More unique are the Tamale Fritters, something akin to Italian arancini but with a tamale filling instead of risotto. It’s breaded and crispy on the outside but soft and warm on the inside, delivering all the best flavors of a tamale without being too dense or heavy. Many of Antojito’s dishes incorporate the flavors of peppers and chiles, here in a guajillo aioli that complements the fritters perfectly.

Onto the entrees, the Guajillo Chicken didn’t stand out as much as the appetizers. The flavors are strong and unique, with the guajillo chile coming forward in a spicy sauce. But the chicken itself wasn’t as moist as it could (or should) have been. The spice is cooled by pineapple salsa and sweet cornbread – my favorite part of the dish.

Universal also offered Antojitos’ Menonita Shrimp entree, but I’m not the best person to offer a good opinion of this dish as I eat very little seafood. I tried it and it was just okay for me, but others in attendance praised it more highly. The corn polenta with manchego cheese served underneath was decent but too loose for my liking.

Finally, a dessert made me want to rush back to Antojitos. Molten Cajeta de Leche is a trio of sweet treats, a lava cake with gooey flowing caramel-like sauce inside, a crispy brittle, and a superb sour cream ice cream. It was a perfect way to end an overall fantastic meal.

Getting back to Grapshi’s expertise, each course of this sampling was perfectly paired with different tequilas. Much like wine pairings, tequilas can be carefully chosen to complement just about any dish – or so I learned today. Grapshi is an encyclopedia of tequila knowledge, having worked with it since 1988. His goal is to not only properly train the Antojitos staff, but also educate the greater public on how tequila is not meant to simply be downed quickly in shots but instead sipped, smelled, and appreciated like a fine wine. Grapshi wants guests at Antojitos to have an “experience they can take away, not just another Mexican meal.” One of his tequila tips: Instead of immediately downing the drink, press it against the soft palate at the roof of your mouth to get the most out of it. Also, before drinking take in the fragrance of the tequila by breathing in from both your nose and opening up your mouth and throat. I’m no expert, but I tried these tips and left with a greater appreciation.

Of course, Antojitos will have its own signature drinks, with and without tequila. They’re not ready to reveal their full menus just yet, but their bartenders and staff are training now and preparing to make the most out of every meal served there.

Antojitos is officially “coming soon,” ready to open in the weeks ahead. It will start service at 5 pm each day, open until 11 pm Sunday through Thursday, and close whenever the crowds dissipate on weekends.

Meanwhile, the rest of the CityWalk overhaul is coming along as well. Universal has opened a temporary tented store while they renovate their main Studio Store. Construction walls reveal the new name “Vivo” for the upcoming Italian restaurant featuring freshly made pasta in-house. And Hot Dog Hall of Fame is under construction immediately across from Antojitos, along with Cowfish down the path. It’s all scheduled to open later this year. 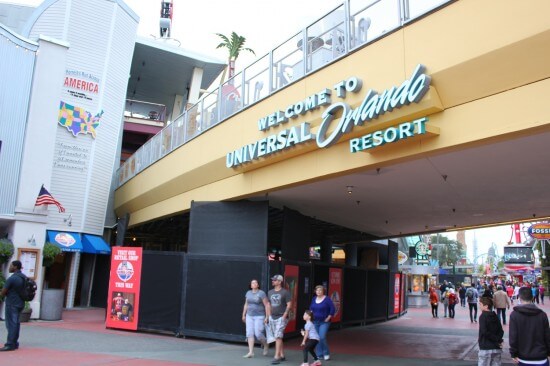