“Mary Poppins” is a timeless classic film with a legendary cast and culmination of years of Walt Disney’s creative efforts and technological advances. Now it has arrived home with a new digital restoration on high-definition Blu-ray, looking better than ever.

Walt Disney struggled to get the rights to make the film from author P.L. Travers for more than 20 years after his own daughter first showed the original book to him. Today, and for the past 50 years, audiences are grateful that Travers eventually relented to allow Disney to transform young stage star Julie Andrews into the legendary big-screen role of Mary Poppins.

On Blu-ray, the film looks great. Songs sound crisp and clear and some moments even expand into the 7.1 surround sound format for an extra fun experience. Though the movie’s special effects are now fifty years old, they still look rather believable for the most part. The combination of animation and live-action still holds up well today, even if the edges are noticeably rough in HD.

What doesn’t hold up quite as well as the pace of the film itself? Though it may look and sound great on Blu-ray, that technology doesn’t help it feel rather sluggish and dated at times. Scenes featuring Mary Poppins and Bert will forever be wonderfully entertaining, but many of the moments surrounding Mr. and Mrs. Banks, particularly at the beginning of the film, seem to carry on for ages. Those who grew up with the film will likely still see it as flawless, but those who are new to it are likely to be most drawn to the musical numbers than anything else.

Related: You Can Celebrate Disney World’s 50th No Matter Which Park You Visit

The release of “Mary Poppins” to Blu-ray this week is timed perfectly with the upcoming release of “Saving Mr. Banks,” which is previewed on the disc. A new bonus feature called “Becoming Mr. Sherman” is more of a bonus feature for “Saving Mr. Banks” than “Mary Poppins,” featuring a conversation between songwriter Richard Sherman and actor Jason Schwartzman who portrays Sherman in the new movie. It’s captivating to see Sherman and Schwartzman recount their meetings and work together for “Saving Mr. Banks,” particularly as Sherman tears up on set when watching Schwartzman play “Feed the Birds” as he had done for Walt Disney so many times years ago.

The only other new extra on this Blu-ray release is a “Mary-oke Sing-Along” with stylish lyrics flying around the screen while the famous songs from the film play. The rest of the bonus features are brought back from previous DVD releases, including a particularly long and interesting “Making of Mary Poppins” with interviews with many of its stars.

“Mary Poppins” 50t anniversary edition is available now on Blu-ray via Amazon and other major retailers. 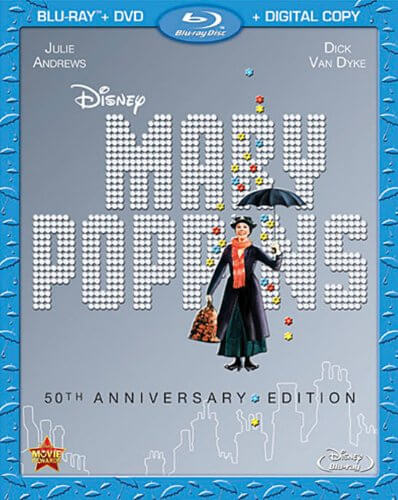