Disney built expectations high when suggesting “Frozen” is “the greatest Disney animated event since The Lion King.” I can’t say I’d push the comparison quite that far, but their 53rd animated feature film is indeed a perfect one. With likable characters, memorable songs, and gorgeous scenery, this movie is emotional and relatable, with just a handful of crucially cringe-worthy moments that thaw the overall satisfaction it delivers.

“Frozen” starts boldly, strongly emphasizing its Norwegian backdrop through setting and song. Backed by the chanting tune of “Vuelie,” the opening musical number written and composed by Norwegian composer Frode Fjellheim and performed in the style of Saami yoiking, the opening sets an unexpected tone that doesn’t at all match the rest of the film. It’s attention-grabbing and assertive but is followed by a total shift in style to one that better suits the comedy-filled adventure that follows.

Sisters Anna and Elsa immediately fit into the ever-growing Disney Princess lineup. It’s certainly unusual for a Disney film to feature two new princesses, let alone sisters. Anna is the more carefree one, a bit flighty and immature, but still cute and friendly despite her rather clumsy nature. She seems weak at first but has a warm heart. Elsa’s life with magical powers is a bit more complicated, requiring her to be more mature, subdued, and even burdened. She seems strong on the outside but is forced to bottle in her emotions, leaving her colder around others. The dynamic creates an interesting mix as the two are quite different from each other, leaving each audience member to relate more to one or the other. (If I had to choose, I personally like Elsa more.) 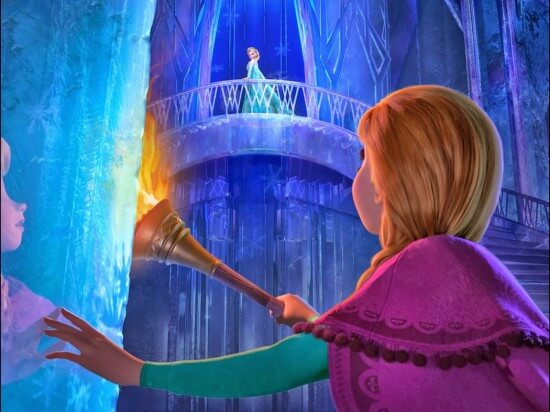 The tale that follows these characters is as unusual as their relationship with each other. “Frozen” is definitely not a traditional Disney Princess movie. Though the Prince Charming element is there, the film, more importantly, turn those traditions on their heads, even referencing them before knocking them down. There’s nothing predictable about where the story ends up or even how it gets there.

In fact, unlike the Jafars and Ursulas of the past, “Frozen” never even has a clear-cut villain. Naturally, there are “good guys” and “bad guys,” but ultimately, it’s the story of two sisters’ own relationship and how they handle each other under extreme circumstances. And, being the princesses of the fictional land of Arendelle, their actions have huge implications over their own people that play a crucial role in the emotional journey that ensues.

Anna and Elsa are wonderfully entertaining to watch across their highs and lows, of which there are many. The drama is consistently enjoyable. “Frozen” leaves audiences surprised quite regularly, with several twists. But the film is far from intense, as its supporting characters are fantastic. Hans and Kristoff are worthy male leads, interesting to watch their own motivations develop throughout the film. But the true star of the supporting cast is Olaf the snowman. He’s cute, innocent, funny, silly, and most of all, endearing. As some of the film’s trailers would suggest, he’s never once crass, stupid, overbearing, or even obnoxious. Most of all, he’s a fantastic new Disney character that fans will love no doubt for years to come. 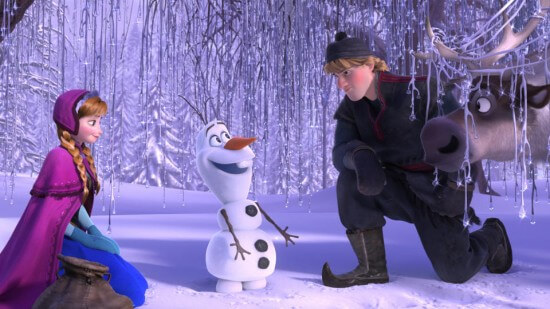 The songs of “Frozen” are a strange mix of incredible new Disney music and forgettable throwaways. “Let It Go” is one of the finest songs to come out of a Disney film in years, beautifully performed by Broadway star Idina Menzel. But with the epic-ness of that song (and its important, character-building sequence in the film) comes a much sillier side with a few other songs that should not have cut, one in particular with such horrible placement that it utterly ruins the flow of an important sequence of events late in the film. But largely, the music of “Frozen” is entertaining, serves to move the story along, and adds to a soundtrack that can be enjoyed alongside other Disney classics. And Olaf’s “In Summer” is among the movie’s funniest moments. “Frozen” is visually stunning. The snowy white canvas that drapes much of the film is often illuminated in vibrant hues of blue and purple that pop off the screen. It’s one of few movies that I can wholeheartedly recommend seeing in 3D. The snow flurries flying through the air in 3D add a fun element but the art direction clearly had 3D in mind when crafting many of the film’s shots, from sweeping vistas to intimate interior moments. The film does struggle with visual style, jumping between dramatic lighting across perfectly framed shots and simpler moments that merely feature some colorful characters and a little more. But mostly, it’s beautiful to look at.

The film’s character design greatly resembles that of “Tangled,” indicating Walt Disney Animation Studios has found a look they want to hold onto, much as most of Pixar’s humans resemble each other in artistic style. Likewise, “Tangled” and “Frozen” share the same adjective-based titles, and Anna even has many of the same facial features as Rapunzel. Thus it’s hard not to compare the two, especially after “Tangled” has been such a huge success for Disney. I found myself immediately thinking I like “Tangled” better after seeing “Frozen.” Still, the more I think about the newer film, the stronger I get to see it again, thinking that opinion may change for the better.

Around 15-20 minutes of silliness could have been cut from “Frozen” to make it a stronger overall film, especially if those less important scenes were replaced by more explanation of some important plot points that were never addressed, such as how exactly Elsa came to have magical ice powers. But even so, “Frozen” will undoubtedly be widely loved if for no other reasons than Anna, Elsa, and Olaf being excellent new Disney characters.

“Frozen” is a must-see for Disney fans and is still be quite enjoyable for those who are even usually opposed to typical Disney Princess films, of which this is not. It may feature a happy ending, but it’s not the same “happily ever after” that concludes so many of Disney’s films.

Be sure to stay through (and read!) the credits for a few extra bits of comedy.

And as if “Frozen” being a great film isn’t enough, the accompanying new short “Get a Horse!” is one of Disney’s best and absolutely must be seen in 3D. Featuring Walt Disney’s own voice as Mickey Mouse, this short film appears to be decades old – but appearances are quite deceiving as this classic comedy gets going. (Look for an Oswald the Lucky Rabbit cameo near the end too!) There is no doubt this is Oscar-worthy animation.