At the D23 Expo Japan, Disney announced details of the world of Avatar coming to Walt Disney World, now set to open in 2017. Concept art, renderings, and a model photo were also released, and details of new nighttime entertainment coming to Disney’s Animal Kingdom.

In collaboration with filmmaker James Cameron, Walt Disney Imagineering is bringing the land of Pandora to life, inspired by Cameron’s “Avatar.” The new land will feature floating mountains, bioluminescent rainforests, and soaring Banshees, all part of the largest expansion in Disney’s Animal Kingdom history.

Disney has also released a video featuring the first look at ride footage for a Banshee flying attraction, the transition from day to night in Avatar land, and more details about the upcoming area.

Included among the concept art released is a glimpse at a boat ride through the glowing world of Pandora. No further details about this ride or any other experiences were revealed just yet. 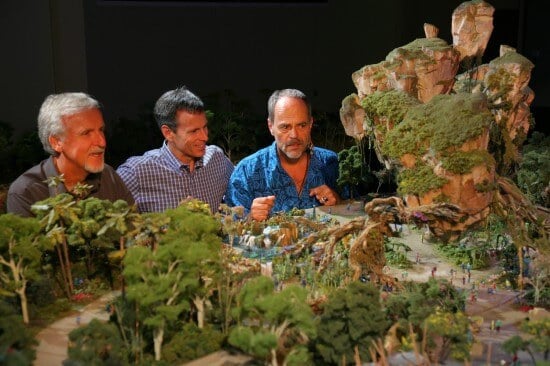 Also, as part of this expansion, Disney’s Animal Kingdom theme park will be adding new entertainment experiences, including after-dark entertainment centered around and above Discovery River, including live performers on Discovery Island, and a new night version of Kilimanjaro Safaris. 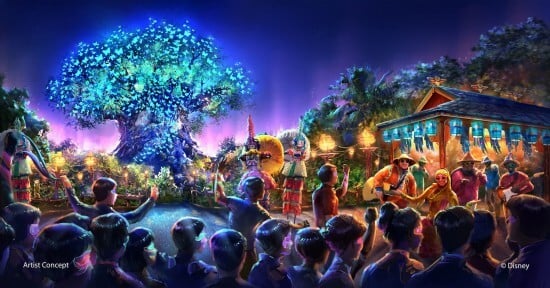 Worth noting is a glowing version of the Tree of Life seen in this artwork, linking the park’s icon to the world of Avatar, in which a glowing tree is at the center of the films I’ve raced.

Avatar is beginning to take shape as a concept for Disney’s Animal Kingdom, but details are still fairly scarce, even with all of this artwork released. The timeline is now roughly four years until the new land opens in conjunction with bringing nightlife to the park that normally closes early. That long timeframe indicates these concepts are still not quite firm, with more details on the way in the coming months and years.