Mickey And The Magical Map Debuts At Disneyland Remixing Classic Disney Music In High-energy, High-tech Stage Show - Inside the Magic

Bringing new life to the Fantasyland Theatre, Disneyland’s new stage show “Mickey and the Magical Map” open to the public tomorrow with exciting visuals that seamlessly blend a medley of songs from classic animated films with high-energy dancing and live singing.

Yesterday Disneyland held the official premiere event for the new show for invited media and Guests. Covering the debut for Inside the Magic were Jeremiah and Josh Daws, who was impressed by the show’s spectacles, shared in the video and photos below.

Kicking off the premiere was recently named Disneyland President Michael Colglazier, with the help of Mickey himself, naturally.

Mickey and the Magical Map was first announced just 5 months ago, adding new entertainment to the Fantasyland Theatre for the first time in several years. 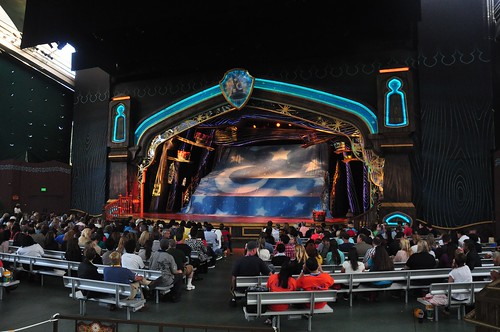 The show blazes through a series of familiar Disney classic songs, remixed and mashed up to create something new. Every scene is a highlight, utilizing talented performers and an impressively interactive video screen set-piece as Mickey swings his paintbrush to transport the audience into the worlds of “The Jungle Book,” “Tangled,” “The Little Mermaid,” “Lilo and Stitch,” “Pocahontas,” “Mulan,” and “The Princess and the Frog.” It also adds a new song called “Journey of the Imagination.” 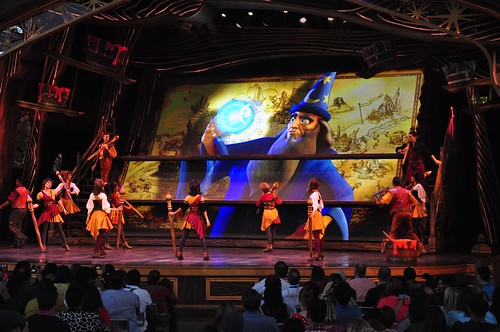 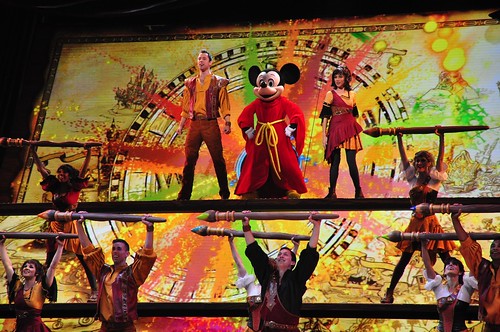 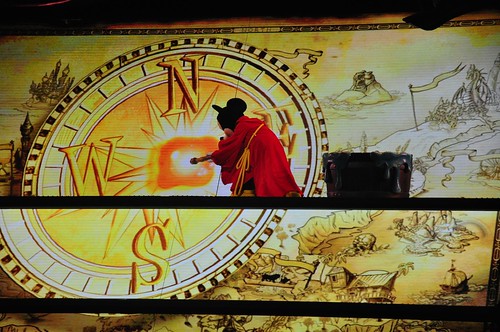 Between musical numbers, Sorcerer Mickey is joined by a larger-than-life appearance of Yen Sid. The sorcerer first appeared in the Disney animated classic “Fantasia” but was most recently made a big part of the “Epic Mickey.” And Disneyland did indeed look to “Epic Mickey” for more than just inspiration for their new show, working closely with Disney Interactive to bring Yen Sid to the big screen. 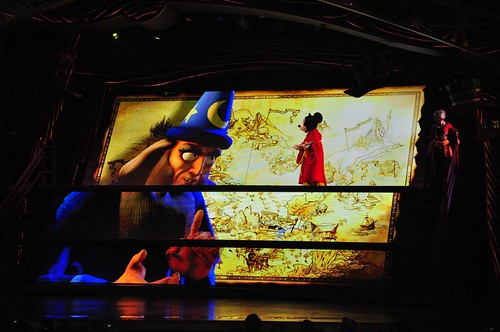 Just after the show’s premiere, Jeremiah talked with Disneyland’s Director of Entertainment, Doug McIntyre, about the “Epic Mickey” influence, Princess medley, and challenges they encountered while creating “Mickey and the Magical Map.”

The innovative multi-level map screen serves as a background and platform for performers to a playoff, featuring nearly 1 million pixels and more than 35,000 square inches of the LED screen surface. Sections of the map are moved on wagons that weigh more than 9,000 pounds each. It’s a modern element of Disney magic that sets this show apart from its predecessors. 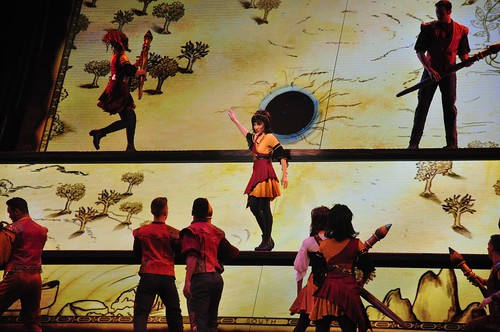 It also gives Mickey a chance to conjure some magic as he disappears into the map during the show, joining Yen Sid in becoming an animated version of himself. 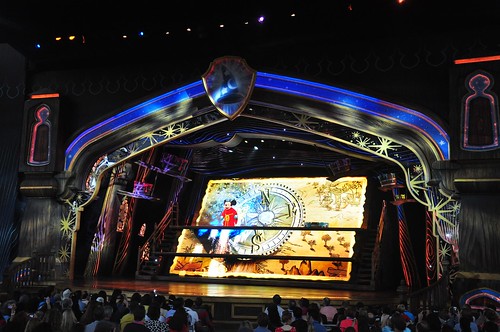 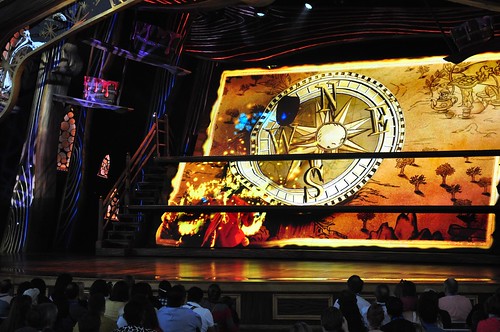 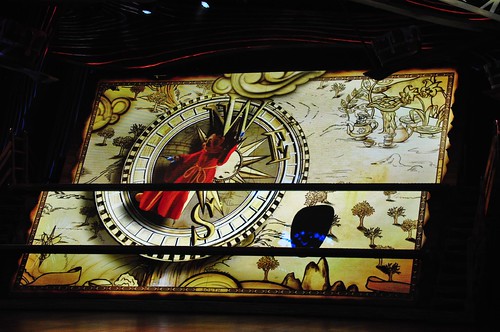 For Disney Princess fans, the crowning moment of “Mickey and the Magical Map” is a song medley first featuring Pocahontas, then joined by Mulan, and ultimately adding Rapunzel and Flynn Rider. “Tangled” has been a huge success for Disney, with the park already featuring it as a comedy show in the recently-opened Fantasy Faire. But this new stage show offers a chance for audiences to connect with the touching song “I See The Light.”

Video: Rapunzel and Flynn Rider sing “I See The Light” in Princess medley at Disneyland 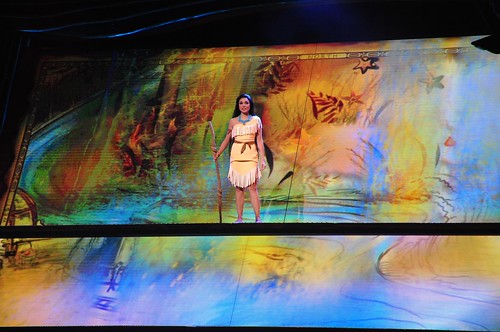 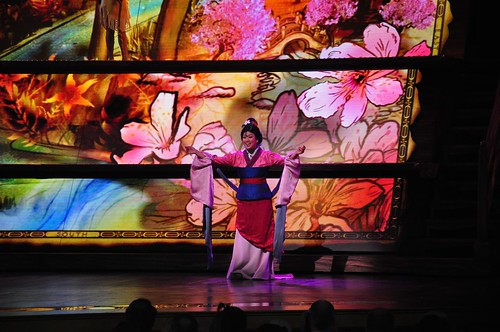 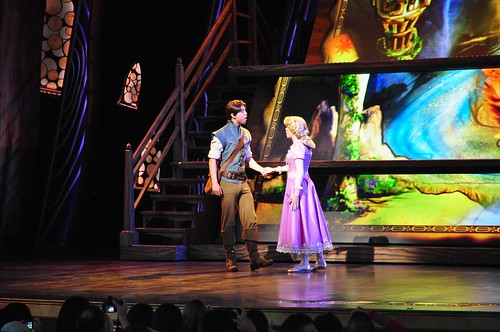 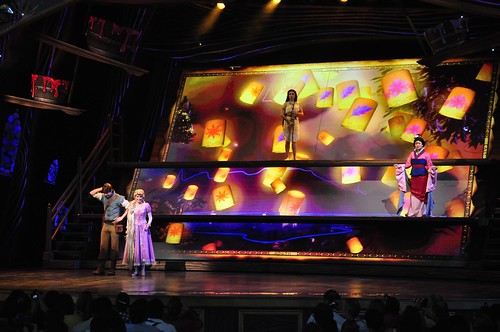 But King Louie’s toe-tapping performance accompanied by an excited trumpet player definitely keeps the crowd excited. And King Louie himself appears more animated than ever before, not only dancing wildly but also blinking his eyes and moving his mouth along with the words. 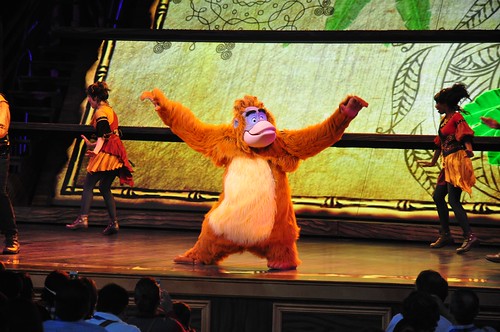 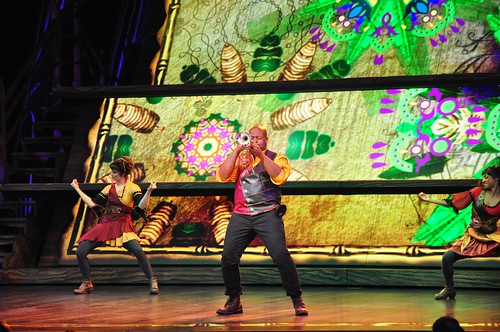 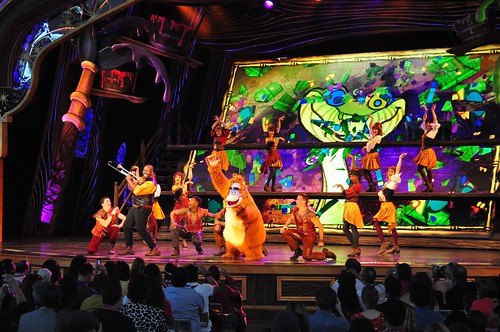 Ultimately, the live performers make “Mickey and the Magical Map” connect with the audience, even running out into the crowd at times during the 22-minute show. More than 900 hopefuls auditioned for the show, and the final company includes more than 50 dancers and singers. By tomorrow’s opening day, the “Mickey and the Magical Map” cast will have spent more than 40 days of rehearsal and training. 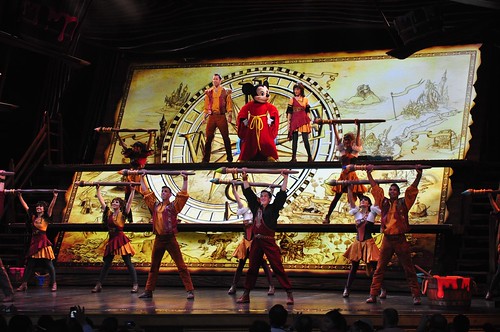 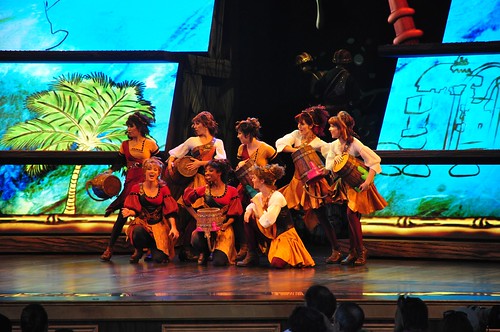 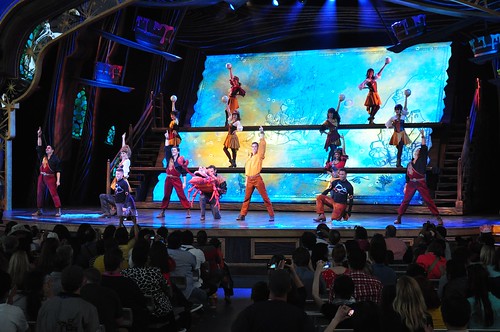 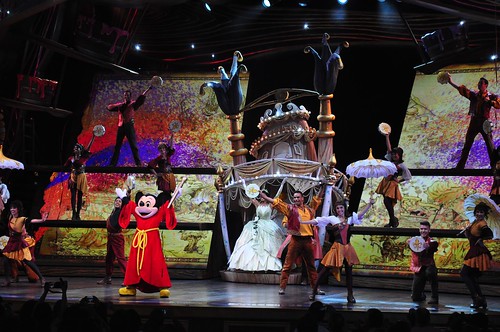 The show is scheduled to run five times per day, seven days a week, during the summer. Show schedules will adjust in the fall.

The enhanced Fantasyland Theatre looks and sounds great, with this upbeat show a perfect fit to add some pizazz to the backside of the park. And Disneyland is counting on it being a hit, noting that the show will be performed for a long time, with the potential of updating its scenes in the future.

For now, beginning tomorrow, Disneyland visitors can take a journey through animated classics by way of Sorcerer Mickey’s paintbrush and one large Magical Map.

For more about the creation of Mickey and the Magical Map, take a look backstage at costuming and music recording, as well as a behind-the-scenes rehearsal of King Louie’s big number.