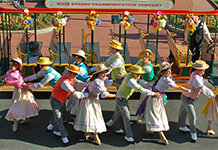 Disney has revealed the next round of Limited Time Magic offerings for Disneyland and Walt Disney World, offering a bit of springtime fun and entertainment inspired by “Oz the Great and Powerful.” The citizens of Main Street, U.S.A. in Magic Kingdom park are bursting with excitement now that spring is in the air. Dressed to the nines in bright pastels and with a few new songs in their hearts, they arrive in town on a horse-drawn trolley adorned with colorful bouquets of flowers and ribbons. Put a little spring in your step and join in the celebration—another part of Limited Time Magic at Walt Disney World Resort. Follow the yellow brick road to WonderGround Gallery in the Downtown Disney District for a limited-time event celebrating the release of the Walt Disney Studios fantastical adventure Oz The Great And Powerful. The gallery will showcase Oz-themed artwork—as well as costumes and props from the film, like Glinda’s gown and accessories.