Walt Disney World has opened a new Pirates of the Caribbean attraction, though a decidedly different one than the classic ride at the Magic Kingdom. Located in Soundstage 4 at Disney’s Hollywood Studios, in the former location of Journey into Narnia, the walkthrough experience is called “The Legend of Captain Jack Sparrow,” It stars that infamous pirate himself recreating a few of his most famous adventures. Considering the original concept for Pirates of the Caribbean was that of a walkthrough attraction, not a ride, it seems fitting that The Legend of Captain Jack Sparrow would follow that path, but with a high-tech twist. There are no Audio-Animatronics figures to be found in this new experience. Instead, Disney utilizes impressive modern technology to bring to life undead skeleton pirates, mermaids, and yes, Jack Sparrow, within a mere few feet of Guests, enveloping them in a show that’s inspired by the hugely successful film series, but still retaining a few nods to the original ride.

It’s an experience that is best experienced in person, stepping into the world of Pirates of the Caribbean, surrounded by special effects and sounds enveloping each visitor. But for those who can’t make it to Disney’s Hollywood Studios any time soon, the video below does a good job at capturing the experience, using binaural audio to reproduce the exciting soundscape – so be sure to wear headphones while watching.

UPDATE (11/27/12): Disney has released a behind-the-scenes look at the creation of “The Legend of Captain Jack Sparrow,” including interviews with Imagineers and Johnny Depp performing in front of a green screen:

A group photo also reveals voice actor James Arnold Taylor as part of the crew, who many fans correctly identified as the voice of the new attraction’s disembodied skull: 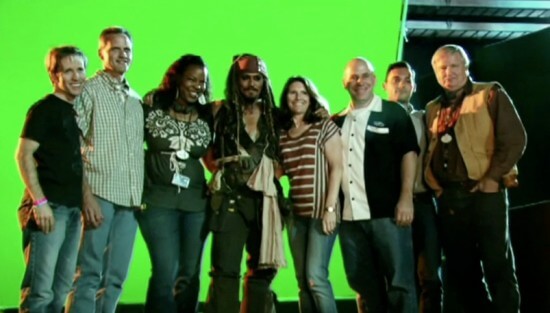 When Jack Sparrow moved into the Pirates of the Caribbean ride a few years ago, some sweeping changes were made to the classic attraction. One was removing the talking skull just before the ride’s big drop, much to many fan’s dismay. Fortunately, that skull has returned, more animated than ever, introducing The Legend of Captain Jack Sparrow with those famous words, “Dead men tell no tales,” and subsequently narrating the whole experience. Following that introduction room, Guests move together in a large group into the main show, which lasts around 10 minutes. With waves crashing in the distance in front of a sunset over the open waters, visitors step into a cave lined with seaside skeletons, bottles, and a tattered old pirate ship somewhat resembling the film’s Black Pearl. The experience soon begins as the disembodied pirate skull appears, floating in the sky, narrating the adventurous moments that unfold, each representing a memorable part of the Pirates of the Caribbean movie series. Through high-tech projection mapping technology, Disney has complete control over every square inch of the show space, surrounding Guests in vibrant animation and lighting. The wind appears to blow the ship’s sails while the skies change to an ominous grey as undead skeleton pirates creep up, seeking treasure.

The skull in the sky makes this an interactive affair, asking Guests to unlock a chest with “great power” and do away with the skeletons by reciting, “Send those bones to Davy Jones.” But Davy Jones hears the call and emerges in the distance with his Flying Dutchman ship, unleashing the Kraken upon all. But an eager roar from the crowd does the trick for battling this fearsome beast. A contrast to the gruesome growls of the Kraken, the sultry sounds of mermaids are heard in the song, beckoning all to join them. But their sinister side shines through as the cave fills with water, and they begin to swarm. A round of feet stomping, prompted by the floating skull, seems to be the response needed to make them swim away. Finally, to finish Davy Jones, the skull calls for Jack Sparrow to come up from the ship’s cabin and take the lead. With the famous role once again played by Johnny Depp, Jack appears most realistically, believably standing up on the ship’s bow for the remainder of the show. It’s a clever use of projection similarly featured in other themes park attractions like Universal Orlando’s Harry Potter and the Forbidden Journey to bring Harry, Ron, and Hermione to life in stunning realism. While Jack looks quite real in Audio-Animatronics form in the Pirates of the Caribbean ride, this projected version may very well fool some unwitting visitors into thinking Depp is standing there in person.

Of course, witty Jack isn’t always savvy about what’s happening, emerging in a few different ways, with a variety of scenes playing out for his introduction, encouraging repeat visits. The video above shows off a close encounter with that famous redhead from the ride.

From there forward, Jack and the floating skull share an entertaining rapport, joking along the way of defeating Davy Jones in the distance. It’s a somewhat anti-climactic finish to an otherwise impressive sensory overload that shines a spotlight on some of the most entertaining elements from the Pirates of the Caribbean franchise.

Though some may find the narrative style of The Legend of Captain Jack Sparrow a bit childish, the exciting visuals are presented in a unique high-tech way, unlike any other Disney attraction, making this show a new must-see stop at Disney’s Hollywood Studios.

The Legend of Captain Jack Sparrow is currently in a soft opening/preview phase and will officially open at Walt Disney World on December 6.

Related : Jack Sparrow in Pirates of the Caribbean Rides: Will Disney Remove Depp?