As one of Disney’s most beloved animated films, “Cinderella” has permeated worldwide cultures since its debut more than 60 years ago – but it’s never looked as good as on this week’s Blu-ray release. Arriving home for the first time in high-definition, this classic continues to draw audiences into a magical world that only Disney can create.

It’s been a long time since I’ve actually sat down to watch “Cinderella” in its entirety, but I can’t imagine a better format to do so than this latest version. With stunningly crisp and restored visuals, presented in their original aspect ratio, the film looks better than ever. From the chirping birds that open the movie to the famous sparkling glass slippers that create its happy ending, each color, line, and character is presented with utmost clarity. A new 7.1 surround sound track is appreciated, never interfering with the intention of the original (also included), but instead simply enhancing it with a few subwoofer rumbles and occasional ambient audio from the surround channels.

Ultimately it is the story, the music, and the magic of “Cinderella” that are most memorable, all of which Disney has enhanced in this Blu-ray release. Disney’s Second Screen technology allows viewers to enjoy a virtual “storybook” companion to the film on a computer, iPod Touch, or iPad, adding artwork and activities to plus the viewing experience. Likewise, a feature called “DisneyView” adds custom artwork to the left and right pillars of the screen, as the main feature doesn’t fill a whole 16×9 frame. The artwork changes with each scene or setting, sometimes adding to the feel of the film, but is also occasionally distracting.

In addition to a variety of classic DVD extras, this release includes several particularly unique bonus features. “The Real Fairy Godmother” is a fascinating story of Mary Alice O’Connor, a name not immediately familiar to most but was instrumental in not only acting as the basis for that famous “Cinderella” character’s design, but also embodying her spirit in real life through charity work. “The Magic of the Glass Slipper: A Cinderella Story” is a quirky short about shoe designer Christian Louboutin’s work in creating a real life glass slipper. It starts off stronger than it ends. “Behind the Magic: A New Disney Princess Fantasyland” offers a glimpse into the construction of the Magic Kingdom theme park’s biggest ever expansion, though immediately upon release of this Blu-ray it’s already quite dated, clearly shot months ago, with its under-construction areas poised to open next month. “Tangled Ever After” is also included, inexplicably. While it’s an amusing short that follows the characters of Disney’s recent hugely popular film “Tangled,” it has nothing to do with “Cinderella.”

The belle of the ball in this latest Disney Blu-ray release is the film “Cinderella” itself, just as enjoyable today as it has been for every generation since its 1950 release. The included bonus features are interesting and entertaining but serve only as an accompaniment to one of Disney’s greatest animated motion pictures.

“Cinderella” Diamond Edition Blu-ray is available now via Amazon and other retailers. 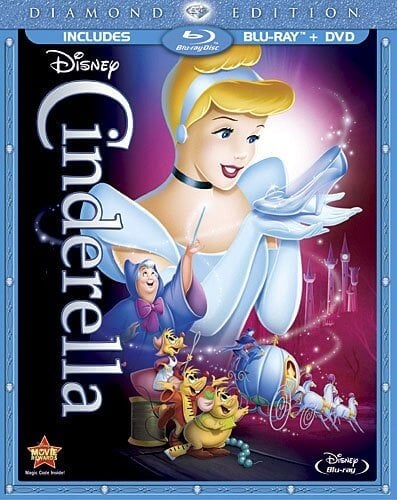