After speeding around Cars Land on exciting rides like Radiator Springs Racers, Disneyland guests can slow down and refuel at one of three unique places to eat within the Disney California Adventure expansion. Though Fillmore’s Taste-In may offer fairly standard quick bites, the dishes found at the Cozy Cone Motel and Flo’s V8 Cafe are anything but typical theme park fare, featuring inventive variations on comfort classics, Mexican meals, and other delicious dishes. 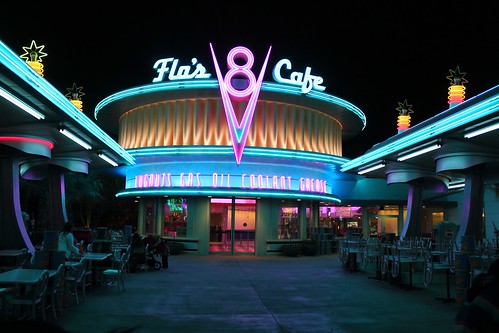 Cars Land visitors with a hearty appetite should look no further than the ’50s-style diner called Flo’s V8 Cafe. Recreated exactly as it appeared in Pixar’s “Cars” films, Flo’s blends the fictional world of Radiator Springs with a real-life retro feel, enveloping patrons in the sock hop era. From vibrant neon lighting in shades of pink and teal to jukebox-themed registers, Flo’s offers a clean “Cars”-infused variation on the typical diner experience. 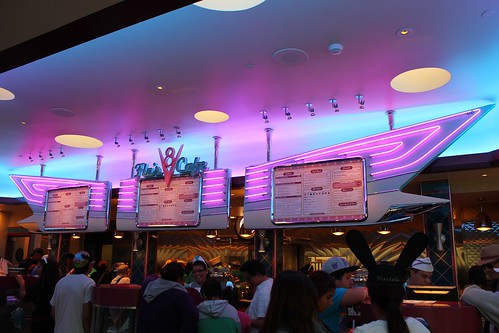 But the food at Flo’s V8 Cafe is certainly not typical, serving up spit-fired rotisserie specialties with unique sides, salad, and desserts, all in big portions. Plated entrees may not win any awards for presentation, looking like they were served off a cafeteria line, they make up for it in flavor. 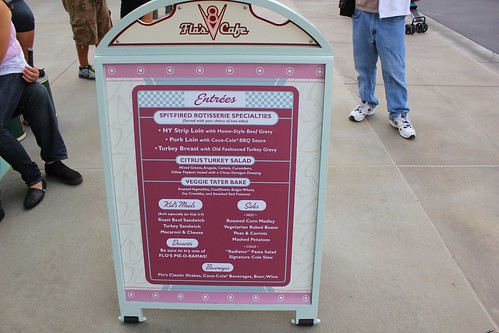 Citrus turkey breast with old fashioned turkey gravy represents everything great about a Thanksgiving meal, but enhanced with special Flo’s twists. Thin turkey breast slices are moist and tender with ample amounts of warm, smooth gravy gracing every bite. The accompanying cranberry sauce is kicked up with a citrus punch too. The “Radiator” pasta salad is served cold, a delicious mixture of vegetables and pasta coated in a rich, creamy dressing. Vegetarian baked beans won’t leave anyone missing meat, piping hot in a thick barbecue-flavored sauce. And a sweet Hawaiian-style roll tops it all off. 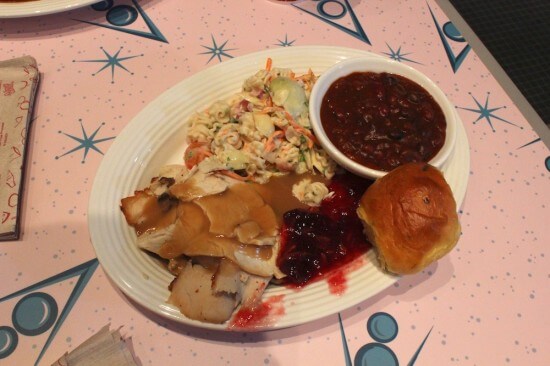 As good as the turkey breast is at Flo’s, the must-have meal for meat lovers is the NY strip loin, cooked well done but sliced so thin it’s never tough or chewy, instead each falling apart by the forkful. The beef is smothered in home-style beef gravy, far thicker and more savory than the turkey gravy. 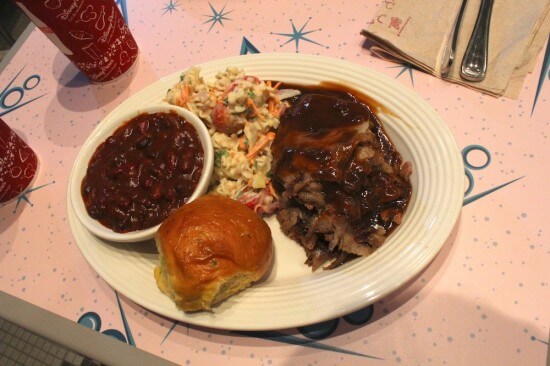 Other sides beyond those described above include a roasted corn medley, peas & carrots, mashed potatoes, and cole slaw.

Many guests also rave about the unique Coca-Cola BBQ sauce that’s served over Flo’s pork loin dish, though I didn’t have a chance to personally try it during my recent Cars Land visit. Likewise, I never got around to sampling one of Flo’s milkshakes. Fortunately, frequent Inside the Magic contributor Jeremiah Daws did, downing a chocolate shake. He tells me it “seemed more like a home-made milkshake than the kind you get at McDonald’s, which is a plus. It comes with crunchy candy balls, similar to the rice substance in a Nestle Crunch bar. The chocolate was a little much once you got to the bottom. I’ll be going with vanilla next time.”

And next time I’ll be sampling some of Flo’s “Pie-O-Ramas,” available in individual portions, as I will definitely be returning to Flo’s V8 Cafe for a new unique mealtime option with flavors like nowhere else at the Disneyland Resort. 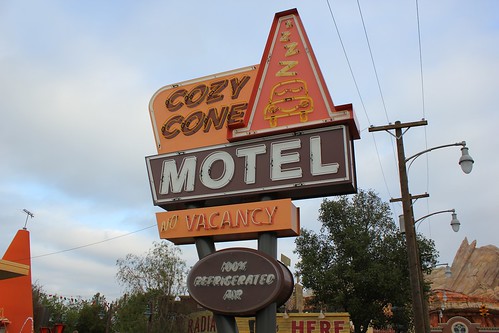 While the Cozy Cone Motel is a hotel and roadside attraction in the film “Cars,” in Cars Land it’s a series of five giant, orange cones, each with its own unique cuisine, some proving to be far more popular than others. 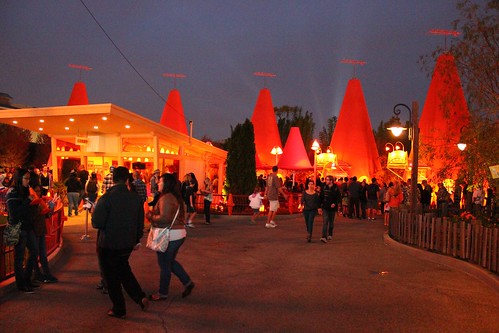 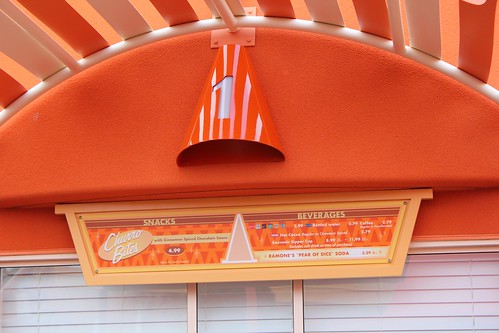 Cone #1 serves Churro Bites with a cinnamon spiced chocolate sauce. Though not typically available in bite-sized form, churros are not at all uncommon to Disneyland patrons and always popular, particularly among the large local Hispanic / Mexican population that frequents the parks. In fact, many of the meals served at the Cozy Cones clearly cater to this demographic, though anyone can definitely enjoy the cuisine. Cone #1 also serves Ramone’s “Pear of Dice” Soda, which definitely requires a love of pears to enjoy. 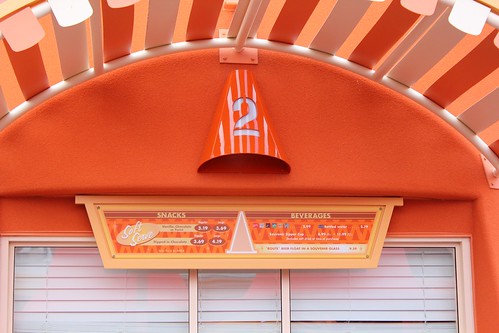 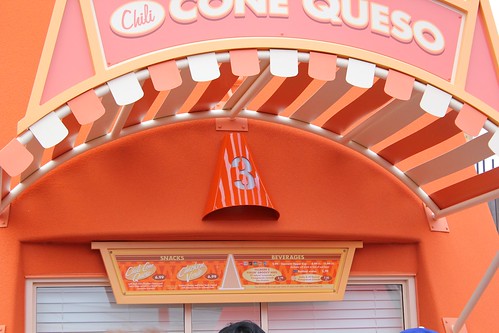 Cone #3 is by far the most popular of all the Cozy Cones, offering unique savory dishes headlined by the pun-tastic Chili Cone Queso. Also served here are Chicken Verde and, for breakfast, a Verde Scramble Cone. Jeremiah reports the Chili Cone Queso has “great chili. There is grated cheese on top but also melted cheese mixed in with the chili. On top of that, it has Fritos layered throughout. Plus the cone is made of bread that easily peels off, like one long ribbon constantly unraveling. I didn’t expect to eat the cone but it was very tasty and soft.” 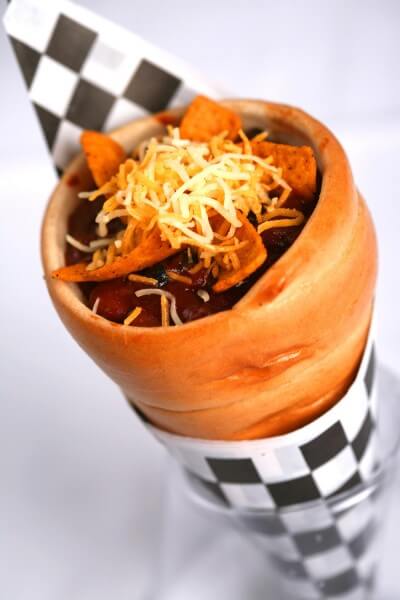 Jeremiah’s brother, Josh Daws, offers his thoughts on the Chicken Verde, likening it to a “spicy chicken soup covered with cheese crumbles in a pretzel bread cone. Chicken pieces had a thick skin on them reminding me more of sausage than chicken. It tasted like a cajun dish rather than mexican, similar to jambalaya. The portion isn’t going to leave you very full, but at $6.99 you wouldn’t really expect it to. Overall I really enjoyed it and will definitely be getting it again.” 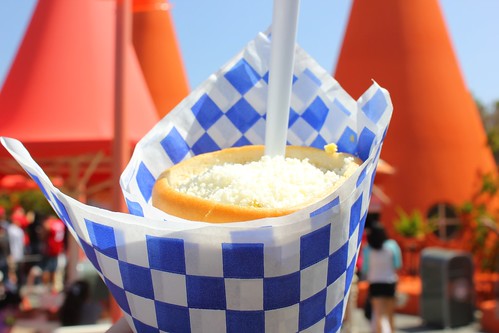 I had the Verde Scramble cone and found each of its elements entirely enjoyable, but overall it was in need of better preparation. A thick layer of queso fresco was sprinkled on top of layers of verde salsa and scrambled eggs, but not at all mixed together. I suppose it’s up to guests to do the mixing. Bites with all three main ingredients combined were a wonderful twist on a breakfast meal, adding a little kick to otherwise boring eggs. Unfortunately, without mixing it together, all that’s left in the end are those boring eggs. But the cone bread does absorb the salsa well, making it a handheld treat that’s fun to eat. 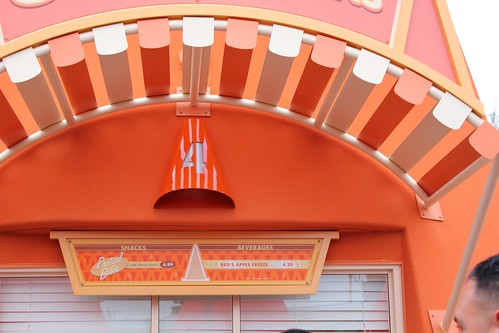 Cone #4 regularly has the shortest line of all of the Cozy Cones, serving Pretzel Bites and Red’s Apple Freeze, my two top favorite items from the Cozy Cone Motel. Pretzel Bites may not be for everyone, and the Apple Freeze drink certainly isn’t (Jeremiah didn’t like it at all), but I found both to be surprisingly perfect in many ways. The warm pretzel nuggets are served fresh, warm to the touch all the way to the center, coated with just the right amount of salt. They’re served with a cup of warm melted cheese, ideal for dipping every bite. 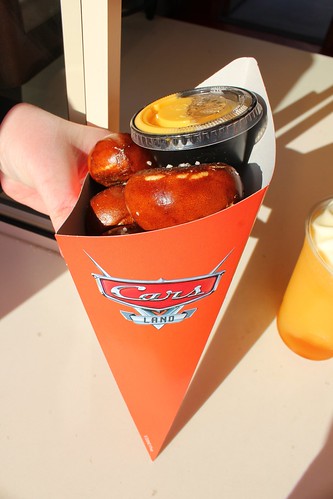 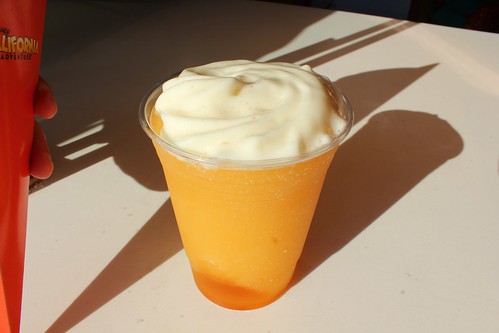 As a big fan of apples (particularly apple juice and apple pie), I ended up downing two Red’s Apple Freeze drinks during my time in Cars Land, loving every drop. They’re prepared in a layered fashion with foam on top, drawing many comparisons to the famous Butterbeer served at Universal Orlando’s Wizarding World of Harry Potter. Frozen apple drink is mixed with toasted marshmallow flavoring and topped with a mango foam, creating a rather tart, but still sweet concoction. 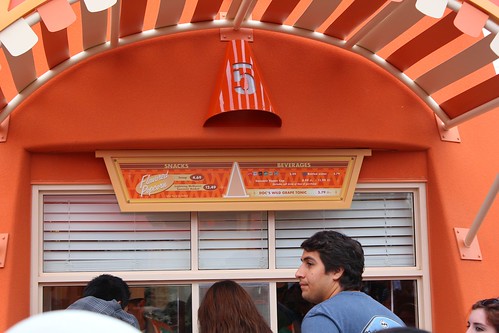 Cone #5 features flavored popcorn, or popcone, with different choices each day, including dill, nacho cheese, and butter, among others. I found the seasoning to be poorly mixed throughout the popcorn and all of it far too salty for my tastes. Perhaps I just had a bad batch. 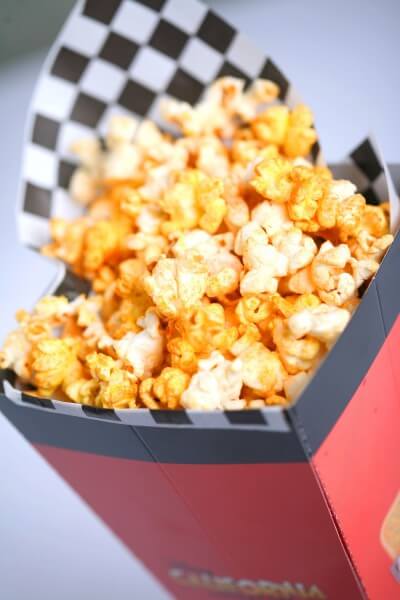 Josh tried this cone’s specialty drink, Doc’s Wild Grape Tonic, describing it as “grape syrup and Sprite topped with a wild berry foam. I was expecting this to be too sweet, but it’s really not at all. Very refreshing actually. The wild berry foam is slightly sour and a nice complement to the grape flavoring. I’ll be getting this regularly.”

I expect the menus of the Cozy Cone Motel to change over time as Disneyland carefully monitors what is selling well and what’s not that hot. And speaking of hot, standing in long, winding lines for each cone is not fun, particularly when the sun is beating down. The cones are located right next to each other with little room for lines to form, leaving guests confused as to which one they’re actually waiting for. All this will surely improve over time.

But lines aside, there’s no doubt something for everyone at the Cozy Cone Motel, whether in search of a unique cold drink or a fun handheld snack. 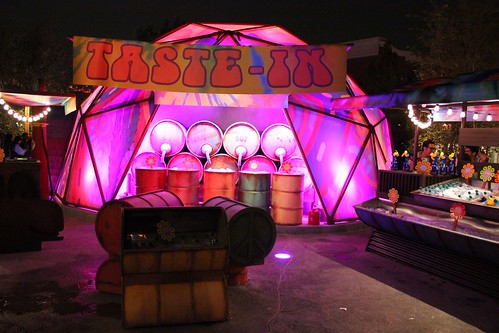 There isn’t much to write about Fillmore’s Taste-In, as it can just barely be considered a third food option in Cars Land. It’s a fairly standard set of stands serving bottled drinks on ice, potato chips, and a variety of fresh fruit. Healthier items like these are wonderful to have in the park, but most guests will just walk on by, stopping only to take in the psychedelic decor, particularly after dark. 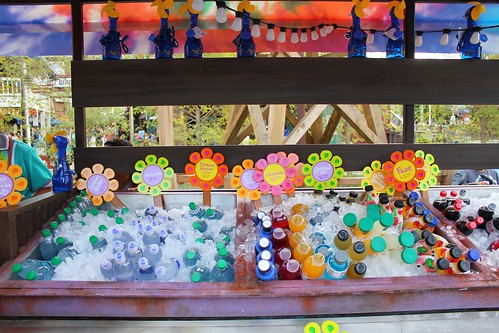 Cars Land not only offers plenty of entertainment but also more than enough options to fight off hunger while shopping the shops and riding the rides. Disneyland has managed to add even more unique food options to Disney California Adventure, creating “Cars”-themed attractions out of the restaurants themselves.