In a new filing with the South Florida Water Management District, Universal Orlando and their attractions design group Universal Creative have detailed plans to replace the recently-demolished Jaws ride with a number of new buildings and pathways. Dubbed “Project 722,” the plans are designed to indicate mass grading, utility tie-ins, and erosion control, but also offer a first look at the layout of 5 major buildings / structures – one extremely large – and a few smaller structures that may provide a first look at the layout for the announced Wizarding World of Harry Potter expansion. 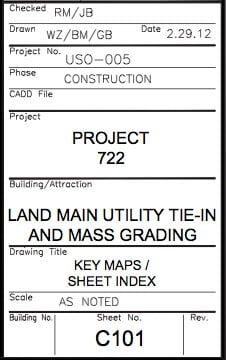 Though Universal Orlando has announced the Potter expansion, they have not yet released details as to what exactly will be part of it, or even where it will be built. But armed with the code name “Project 722,” first used on a previous Universal Orlando demolition filing and now again included on the recent paperwork dated Feb. 29, 2012, web site HHNRumors.com connected several artists and designers that formerly worked on the Harry Potter film series as well as the original Wizarding World of Harry Potter to the new project code name. So it seems highly likely that the Wizarding World of Harry Potter expansion is indeed dubbed “Project 722,” just as the original Wizarding World was once referred to as project “Strongarm” – a reference to the KUKA robotic arm ride vehicle system used in the Harry Potter and the Forbidden Journey ride.

And now, the new water management filing directly links “Project 722” to the former home of the Jaws ride, all but confirming that Universal Studios Florida will be the home of the Harry Potter expansion, at least in part.

So with all that in mind, let’s take a look at the revealed building layout: 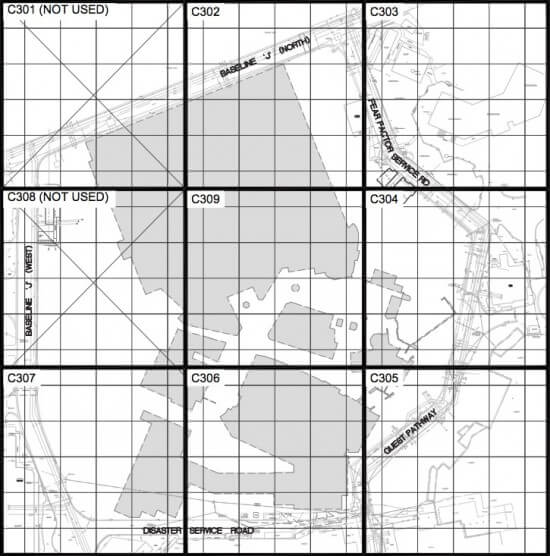 Just what are all those grey buildings that will be replacing the Jaws lagoon and surrounding Amity village?

Universal has not announced specifics that will be included in the expansion of the Wizarding World of Harry Potter, but rumored attractions include Diagon Alley, a Gringotts Bank ride, Leaky Cauldron restaurant, and other walk-through experiences. But it’s not clear from this paperwork if any of these will indeed be featured. The large building at the top of the drawing above certainly appears to be a major attraction and could house a Gringotts roller coaster-style ride – but it could also be anything else.

Also rumored is a real-life Hogwarts Express train that would connect the existing Wizarding World of Harry Potter in the Islands of Adventure theme park to the former Jaws area in Universal Studios Florida, by way of areas that are currently backstage and inaccessible to park guests. But there is not yet any indication of such a train on the basic building layout shown above, though the lower-left building certainly could be viewed as a train station, lining up with the necessary roads that would lead from one park to the other.

For frame of reference, here is the satellite map that’s also included in the filing: 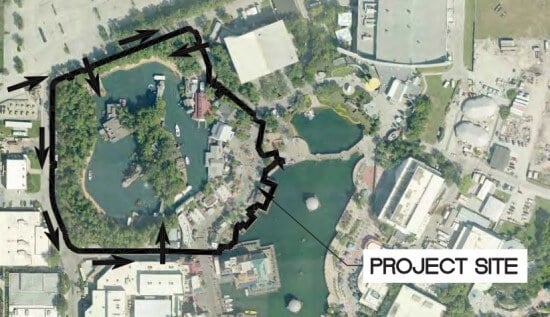 The only thing that is absolutely clear from the new paperwork filed by Universal Orlando and Universal Creative is that Jaws is going to be replaced by a new area with several buildings, pathways, and attractions. It seems safe to assume that the code name “Project 722” is linked to the Wizarding World of Harry Potter expansion, but not definite. And everything else is just a rumor or a stretch at this time. But given that a building layout has been officially filed and the Jaws ride completely demolished, it’s likely that Universal will reveal more about their Potter plans soon, as construction begins to take shape in the park(s).

The complete PDF paperwork filed by Universal Orlando can be viewed on the South Florida Water Management District web site.

(Hat tip to Epcyclopedia.com for first noticing the plans.)