In a complete contrast to the family-friendly Mickey’s Halloween Party at Walt Disney World and Disneyland, for two nights Disneyland Resort Paris plans to turn their Walt Disney Studios Park into a Halloween horror fest during Terrorific Night 2011. While the event likely won’t be as intense as Universal’s Halloween Horror Nights in Orlando and Los Angeles, it’s exactly the type of Halloween fun that many adult Disney fans have hoped would eventually arrive to the United States.

“Terrorific Night” began as a one-night event in 2008, put on in the park by a separate company. Last Disney brought back the event as “Terrorific Night 2” on October 30, 2010. Now “Terrorfiic Night 2011” will fill the Walt Disney Studios Park streets with scare actors and Halloween-themed shows for two nights, on October 29 & 30, 2011.

The full teaser image for Terrorific Night 2011 seems to indicate that zombies will play a role in the event, though details haven’t been revealed yet: 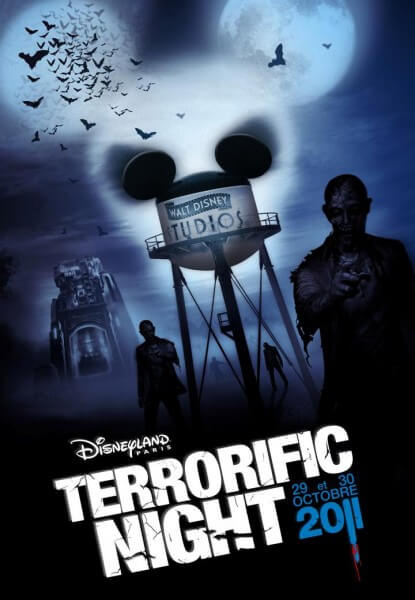 Those who attended previous years have said that while Terrorific Night is definitely not family-friendly, it’s also not nearly up to the same level of scares and elaborate themes as Halloween Horror Nights or Busch Gardens’ Howl-O-Scream – but it is a much newer event, and one that many would enjoy seeing ported to Disney’s Hollywood Studios here in Orlando. Mickey’s Not-So-Scary Halloween Party is fun for children and adults, but leaves hardcore Halloween fans wanting more.

Last year Photosmagiques.com, a Disneyland Resort Paris fan site, posted video of the Terrorific Tram Tour, showing off some of the spooky happenings that occurred during Terrorific Night 2:

(For comparison, Universal Studios Hollywood has their own Terror Tram each year at Halloween Horror Nights.)

The site also has a great photo gallery of images that I would never have guessed were captured inside a Disney theme park.

Disneyland Resort Paris teased the 2010 event with a “Blair Witch”-style “home video” of a guest frantically scurrying through the park:

(Thanks to Andy from dlp.info for the heads-up!)