A very busy Earth Day 2011 at SeaWorld Orlando marked the debut of the all-new killer whale show, “One Ocean,” replacing the popular “Belief,” a killer whale show that enjoyed a five-year run in all three SeaWorld parks.

Here’s a video summary of “One Ocean” offering highlights of high jumps and high energy:

“One Ocean” features many of SeaWorld’s killer whales, including the massive Tilikum who recently returned to the waters. While the whales’ trainers are still not swimming with the whales, they heavily interact with them along the waterside, getting quite up close and personal. Between dancing, hugging, and kissing, it’s a fun show that almost makes Guests forget the unfortunate past incident that prevents trainers from riding on the whales as they’ve done in the past. In attendance for the grand opening of “One Ocean” were animal expert Jack Hanna and singer Spencer Lee, who has appeared on TV shows including “Glee.” The pair helped kick-off and conclude the new spectacle, with many splashes and laughs in between. And it is those Guests that will get soaked when Tilikum and the gang flap their fins with exactly that goal in mind. Thirty-five programmable fountains, arcing up to 50 feet across the pool, ring Shamu Stadium and are synchronized to the musical score. The original score of “One Ocean” features three new songs: “One Song,” “Side by Side,” and “We’re One.” Each has its own feel, with the first and last featuring fast-paced, high-flying fun while the middle offers a few touching moments. 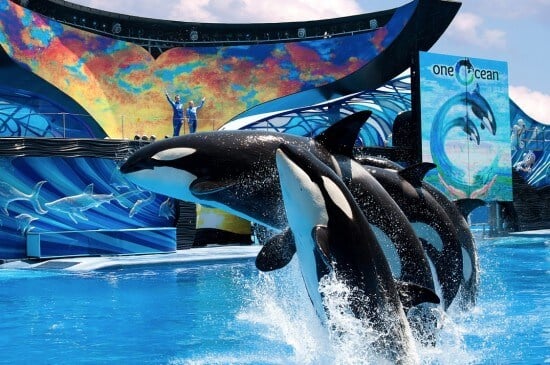 “One Ocean” is performed multiple times daily at SeaWorld Orlando and will soon make its way to SeaWorld San Diego and SeaWorld San Antonio.